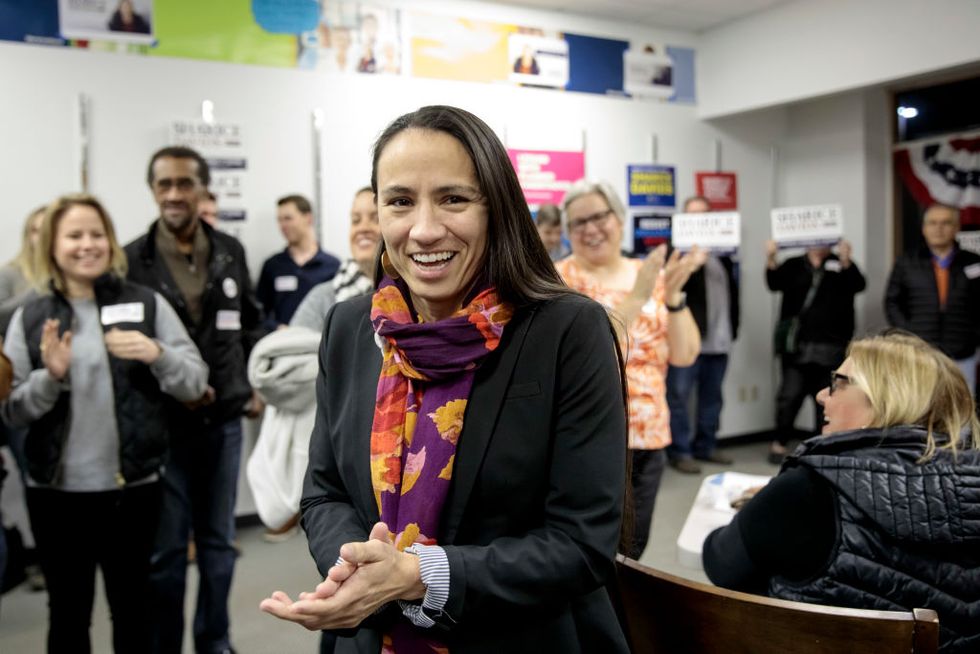 Democrat Sharice Davids, an attorney and economics adviser, won the race for Kansas' Third District, which includes Johnson and Wyandotte counties and parts of Miami County. Davids received 53.3 percent of the vote. Her opponent, the incumbent Representative Kevin Yoder, received 44.2 percent of the vote.

A member of the Ho-Chunk Nation, Davids is the first Native American woman elected to Congress. She might share that distinction with New Mexico Democrat Deb Haaland if Haaland prevails in her House race tonight. She is also the first LGBT politician to represent Kansas at the federal level.

“We’ve felt a noticeable shift over the past week to two weeks in momentum of folks coming back home, whether they were for us and are now more energized or whether they were undecided,” Yoder said at the time. “We talk to people every day wherever we go that say, ‘Oh my gosh, that debate.'"

The Democratic Congressional Campaign Committee (DCCC) spent $497,000 as of September 2018 on ads criticizing Yoder. The group EMILY'S List spent $399,000 on similar media, according to Ballotpedia.

Davids previously worked as a White House Fellow in the Department of Transportation. She has also served chair of the board of directors of Twelve Clans, Inc. for the Ho-Chunk Nation. Additionally, she's served as deputy director for the Thunder Valley Community Development Corporation on the Pine Ridge Indian Reservation.

Davids' platform emphasized the economy: She has proposed a tax cut for the middle class and creating a childcare tax credit. She has also suggested that Kansas capitalize on wind energy due to its location, which boasts some of the nation's highest potential. Davids has also expressed support for tax incentives that promote wind and similar energy sources. On the matter of health care, she's promoted the continued expansion of Medicaid.

The Kansas City Starendorsed Davids. The editorial board wrote:

Davids has never held elective office. What she lacks in experience, though, she more than makes up for with intelligence and thoughtfulness. She does not believe she has all the answers to every problem facing the country, but she is willing to listen and to think through potential solutions, rare qualities in contemporary politics.

That approach will serve the 3rd District well.

The board highlighted some of her policy proposals while setting the record straight around Davids' perception of immigration reform and Immigration and Customs Enforcement (ICE):

Davids believes the U.S. should require insurance companies to offer coverage at a reasonable cost to patients with pre-existing medical conditions. She thinks Medicaid coverage should be expanded in every state. She wants to improve Obamacare, not repeal it.

Davids thinks taxes should be reduced for those with lower incomes and believes more tax cuts for the wealthy are unnecessary and counterproductive. She says federal law should prohibit discrimination based on sexual orientation or gender identity.

Despite what you’ve heard, she does not support eliminating Immigration and Customs Enforcement. But she does think immigration laws should be improved, and she supports providing eventual citizenship for young children brought to the U.S. by immigrant parents.