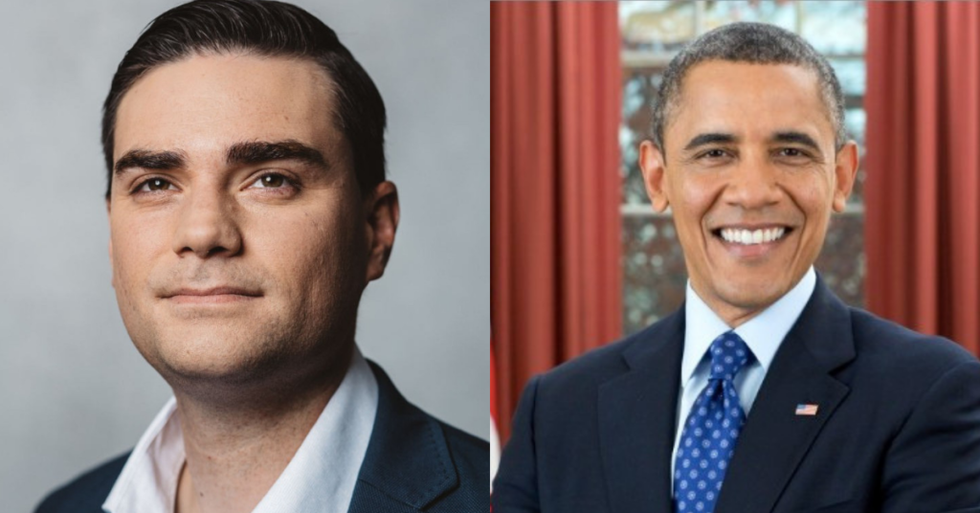 Ben Shapiro—a conservative mouthpiece and author—issued another outrageous false claim on Monday. And as with every time—including when he stormed out of a BBC interview—people were quick to correct him.

The video from Shapiro's The Daily Wire was shared on Twitter by Jason Campbell of media watchdog Media Matters for America (MMFA).

When he shared Shapiro's latest video, Campbell captioned it:

In the video, Shapiro states:

After Campbell called Shapiro out, Shapiro fired back—forgetting that President Trump toyed with running for President as a Republican in 2012—claiming:

"Trump was a fringe character for nearly the entirety of the Obama presidency; he wasn't a 'Republican figure' until he ran. You can't name a single major elected Republican official during Obama's presidency who challenged the legitimacy of his presidency."

Trump was a fringe character for nearly the entirety of the Obama presidency; he wasn't a "Republican figure" until… https://t.co/5O7WoI9SeE
— Ben Shapiro (@Ben Shapiro) 1566246439.0

The gauntlet was thrown and quickly picked up.

Aside from GOP candidate Romney's trip to kiss the Trump ring, others found plenty of elected Republican officials to highlight.

After establishing just a few examples of the many in which prominent Republicans attacked the legitimacy of President Obama and threatened to impeach him, journalist Jonathan M. Katz called out Shapiro and his motives for the false claim.

"So, now that your ahistorical argument is done with, let's talk about the reason you made it."

"You know that the GOP has made unhinged attempts to keep the White House since Reagan, by any means necessary: Impeachment. Stealing elections. Whatever."

"What you want to do is move the conversation to a place where you equate holding Trump accountable for his real and multifarious crimes, including during 2016 election, to birtherism. (Which of course you'd like us to forget for a moment was Trump's movement.)"

"If you can equate Trump's encyclopedic crimes to wacky failed right-wing conspiracy theories, you can work the refs into regarding Constitutional accountability as a fringe idea."

"And it might work! But it shouldn't. Because you're a dirty little liar."

And while it is understandable that Shapiro does not consider himself—or all of FOX News or Breitbart where he once worked—as major or prominent Republican leaders, the lies of birtherism were a core component of conservative Republican media throughout the Obama campaign in 2008 and continue to be still.

After substantial evidence was provided of the falseness of his claim—as with his BBC interview where he told a respected British conservative journalist he [Shapiro] was popular and the interviewer wasn't before storming off—Shapiro claimed he was misunderstood, plugged his own content and lashed out at MMFA for outing his false claim so others could use facts and his own words to prove him wrong again.

For those interested in what the US Constitution and the Supreme Court says about the matter of birthplace, President Barack Obama's Hawaiian birth is immaterial—just as it was for Mitt Romney's Mexican born father George who ran for President in 1968 or Canadian born Raphael "Ted" Cruz who ran in 2016—because one of his parents was an American citizen. As long as at least one parent is a citizen of the United States, their child can run for and become President.

Barack Obama's mother Stanley "Ann" Dunham Obama Soetoro was born in Wichita, Kansas. Being born in Kansas in 1942 made her a United States citizen and her son eligible to be the 44th President.

The book Trumpocalypse Now!: The Triumph of the Conspiracy Spectacle is available here.