Sessions Strikes Back Against Chicago Over Sanctuary City Suit 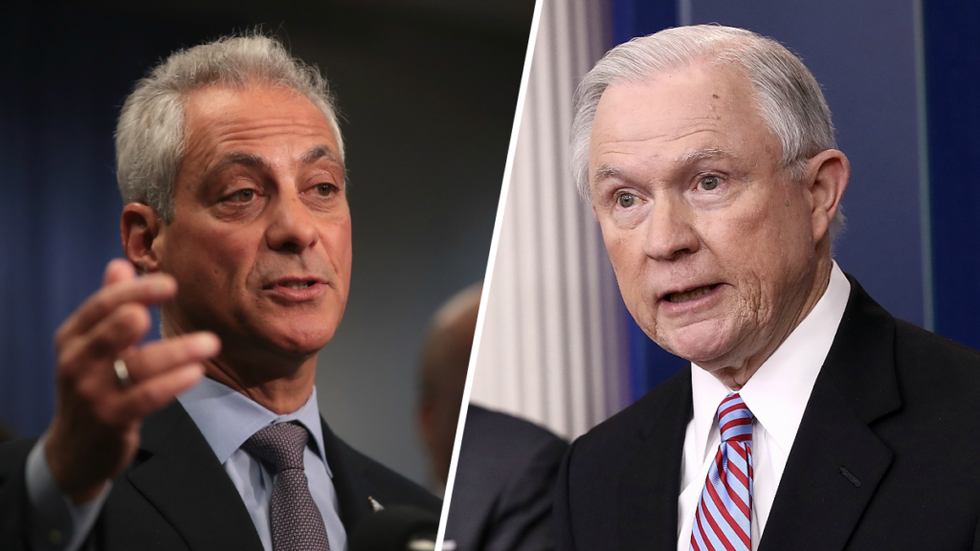 "It's especially tragic that the mayor is less concerned with that staggering figure than he is spending time and taxpayer money protecting criminal aliens and putting Chicago's law enforcement at greater risk," Justice Department spokeswoman Sarah Isgur Flores said in a statement.

The Justice Department's response comes after Mayor Rahm Emanuel announced that the City of Chicago will file a federal lawsuit against the Justice Department alleging it's illegal for the federal government to withhold public safety grants from so-called "sanctuary cities." Prior to Emanuel's announcement, Sessions had announced that the DOJ would bar cities from a certain grant program unless they allow immigration authorities unlimited access to local jails and provide 48 hours' notice before releasing anyone wanted for immigration violations.

"Chicago will not let our police officers become political pawns in a debate," Emanuel said at a press conference. "Chicago will not let our residents have their fundamental rights isolated and violated. And Chicago will never relinquish our status as a welcoming city... We’re going to act immediately to make sure that there’s a ruling by the court, as there’s been on other issues related to immigration and refugee policies, where the court has basically stopped the Trump Administration in its tracks.”

Edward Byrne Memorial Justice Assistance Grants provide funding to hundreds of cities. The Trump administration has requested $380 million in funding for next year. Chicago expects to receive $3.2 million this year for purchasing equipment. The city received about $2.3 million in such grants last year, which have been used for buying police vehicles.