By the end of 2017, Italian doctor Sergio Canavero plans to carry out a highly controversial procedure: the first head human transplant between an anonymous recipient and a “brain-dead” body donor. 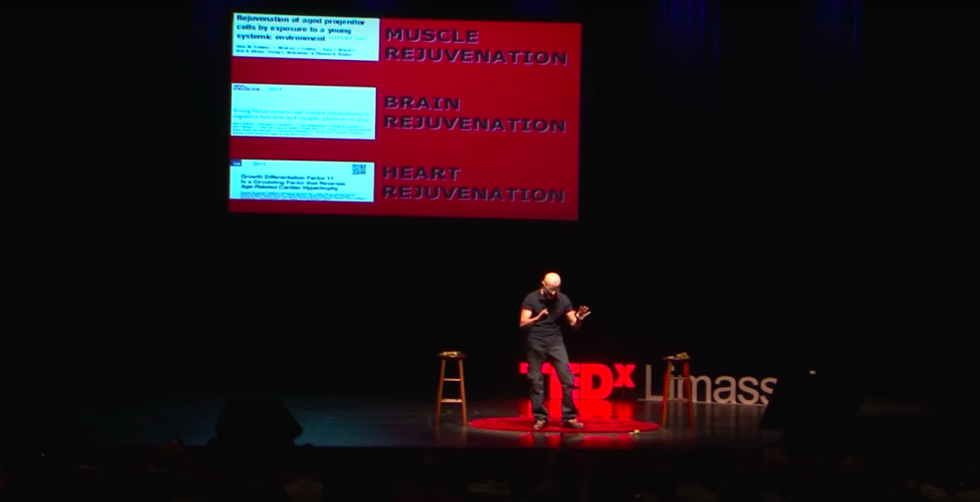 Dr. Sergio Canavero speaks at a TEDx event. TEDx notes that the talk is "best viewed as a speculative what-if scenario, and with awareness that the 2017 surgeries performed by Dr. Canavero on human cadavers have raised practical and ethical concerns in the scientific community." (Screenshot via Youtube.)

Imagine a world where those with devastating spinal injuries or degenerative muscle diseases could simply replace their failing bodies. Imagine a living patient whose brain is still active but body is falling apart being able to transplant his head onto a healthy body. Sound like an episode of Black Mirror or The Twilight Zone? Not according to Italian doctor Sergio Canavero, who since 2015 has boldly claimed that by 2017 he’d successfully carry out the first human head transplant.

In November, Canavero announced that he’s imminently ready to transplant a living patient’s head onto the healthy body of a brain-dead organ donor, after having already “rehearsed” with an 18-hour transplant on a cadaver in China. With little evidence to back him, and facing widespread doubt from the medical community regarding his previous animal transplantations, Canavero’s audacious assertions have long opened him up to criticism from scientists and ethicists alike.

Canavero’s time in the spotlight has been pockmarked with shadow. His proposed transplantation technique proved successful in the case of a dog, which began walking after six weeks. Still, other experiments have not been as cleanly executed. Prior attempts to fuse severed spinal cords in mice left experts skeptical of his methods. Additionally, in 2016, the doctor contended he had performed a successful head transplant on a monkey without reattaching its spinal cord, and failed to publish a paper detailing the procedure.

This history of patchy animal trials has convinced some researchers it’s still too soon to test the transplant on living humans. "There are too many risks at this point to go ahead with it," said Assya Pascalev, a biomedical ethicist at Howard University. "We don't have enough data with animal models, sufficient published and peer-reviewed results, and particularly data about morbidity and mortality on the animals that have had the procedure…”

Perhaps the biggest hurdle to a successful transplantation comes down to the complex nature of the human spinal cord: doctors have yet to reconnect a fully detached spinal cord, which has millions of nerve connections that are nearly impossible to rejoin. However, Canavero claims to have achieved this on a corpse, and hopes to reenact it on living humans in a procedure that will involve several dozen surgeons and specialists.

First, surgeons will simultaneously sever the donor’s and recipient’s spinal cords with a diamond blade. For the next 24 hours, the team will separate and rejoin intricate internal structures, such as the trachea, esophagus, vertebral bones, and jugular veins, while machines help the recipient breathe and pump blood during an induced state of hypothermia designed to prevent brain death.

Another particularly challenging feature of the procedure is the brain’s fragility. In contrast to a heart, which can be preserved on ice for the time needed to transfer them from donor to host, the brain becomes damaged severely within minutes of being cut from a blood supply. Patient brain damage may negate benefits incurred by switching to a healthy new body. Other potential risks scientists foresee include the body’s physical rejection of the newly transplanted head, as well as the individual’s psychological rejection of a new, alien body.

While Canavero has not released the identity of either the donor or recipient, he was willing to speak out against the Western world’s unwillingness to host this ground-breaking experiment, which will occur in China at a cost of up to $100 million: "No American medical institute or center would pursue this, and there is no will by the U.S. government to support it.”

According to Karen Rommelfanger, a neuroethicist at Emory University Center for Ethics, this is not surprising. In the U.S., the test would raise a host of complex regulatory and ethical concerns, in part due to cultural standards that may differ from those of China.

For instance, according to the U.S.’s Uniform Determination of Death Act, someone is “dead” only once their brain completely stops functioning; China has no similar brain death definition, raising concerns as to who would be considered “brain dead” and thus a viable body to host a healthy new head. In addition, U.S. research requires scientists receive “informed consent” from living patients before using them for experiments, though the definition of consent also differs around the world: “This is going to be done to someone,” Rommelfanger said, “but the question is whether people will even be given the opportunity to consent…”

Canavero insists that his procedure will soon change the course of nature itself: “For too long nature has dictated her rules to us. We're born, we grow, we age and we die … We have entered an age where we will take our destiny back in our hands. It will change everything. It will change you at every level.”