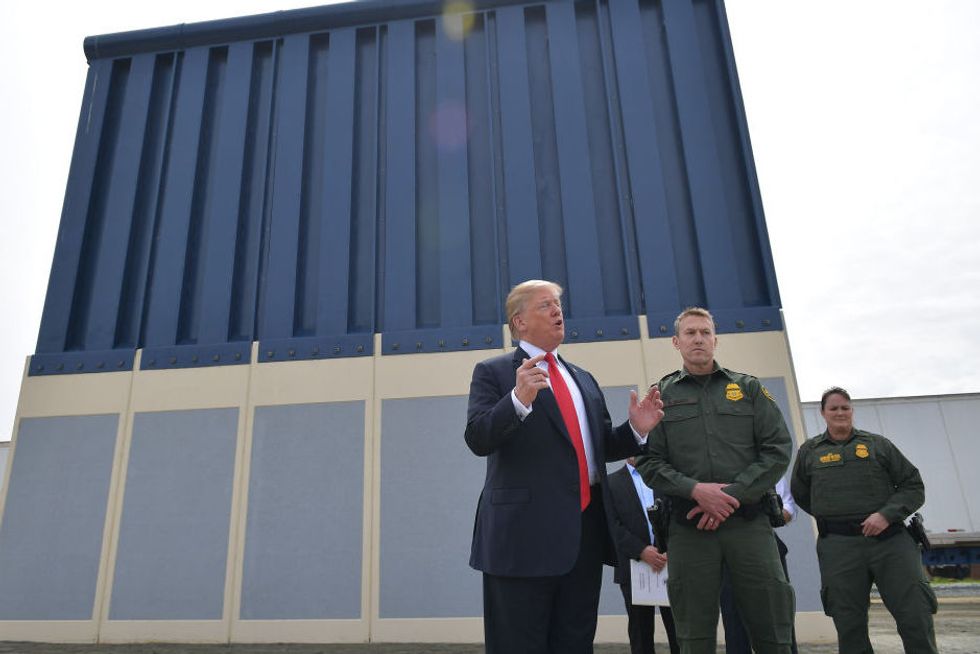 UPDATE: the U.S. Senate voted on 2 competing proposals to re-open the government this afternoon. The first, which would fund President Donald Trump's border wall, failed by a vote of 50-47. The second, which was a Democratic proposal to fund the government for 2 weeks without any money for the border wall, failed 52-44, including 6 Republicans who voted Yes including Senator Lamar Alexander (R-TN), Senator Susan Collins (R-ME), Senator Cory Gardner (R-CO), Senator Johnny Isakson (R-GA), Senator Lisa Murkowski (R-AK), Senator Mitt Romney (R-UT.)

Despite claims by President Donald Trump that Republicans are completely in support of both his border wall and his government shutdown, GOP members of Congress indicate otherwise. The only GOP member of the House to represent a district along the Mexican border called Trump's wall the "most expensive and least effective" form of border security; Republican members of the House supported a bill that failed to fund the border wall; and now three Republican Senators announced they would also support reopening the government without funding Trump's wall.

The Senate is slated to vote on two proposals to end the government shutdown Thursday. One provides funding for Trump's wall and the other—already passed by the House—does not.

Republican Senator Susan Collins of Maine became the first GOP Senator to make public her intention. However Collins qualified her support for ending Trump's government shutdown by saying she would support Trump's proposal for border wall funding, but if it failed to pass, she would support ending the shutdown without giving Trump the billions of dollars he wants for his wall.

"Shutdowns represent the ultimate failure to govern and should never be used as a weapon to achieve an outcome."

In an email to the Portland Press Herald, Collins wrote:

"The shutdown is so extraordinarily unfair. I’ll vote yes and yes."

Collins decision to support the billions of dollars Trump is trying to force Congress to give him by creating the government shutdown ignores the lack of public support for the President's pet project. The Maine Republican was followed by GOP Senators Lisa Murkowski of Alaska and Cory Gardner of Colorado.

Notable: Sen. Cory Gardner is among the Republican Senate incumbents up for re-election next year, and just finishe… https://t.co/Lv2h4rHkW7
— Susan Page (@Susan Page) 1548324159.0

Both Gardner and Murkowski also indicated they would vote for the bill that gives Trump his border funding and the one that did not in hopes that one of the competing bills would pass so the President's government shutdown could end.

"We don't need to hold up these six [eight] other departments at the same time that we are resolving these very important security issues."

"I think we should pass a continuing resolution to get the government back open. The Senate has done it last Congress, we should do it again today."

"I'm not saying their whole plan is a valid plan, but I see no reason why the bills that are ready to go and on which we've achieved an agreement should be held hostage to this debate over border security."

Reactions to the Senators' willingness to vote for any bill that reopens the government received mixed reactions.

Some applauded Republican Senators Murkowski's and Gardner's willingness to reopen the government even if the President fails to get what he wants.

Thank you Sen. Cory Gardner @SenCoryGardner for considering to vote to end the shutdown and placing country before… https://t.co/zGA2KQ4ti7
— Brad Shreve (@Brad Shreve) 1548350099.0

@SenatorCollins Humpty Trumpty will never get his wall. And you will be removed in Maine if you do not vote to reopen the government
— Louise Mensch (@Louise Mensch) 1547942980.0

@SenatorCollins Do you ever say anything definitive? I’m furloughed and nothing you said makes me feel even a litt… https://t.co/zWhfjcVd2f
— Jill Resists (@Jill Resists) 1547941947.0

@JillFrance @SenatorCollins Exactly! She didn’t say anything that speaks to a solution and she knows his words were… https://t.co/YLVhMkpuHg
— Isn’t All It Seems (@Isn’t All It Seems) 1547942527.0

@SenatorCollins NO WALL We don’t negotiate with terrorists and hostage takers Trump has held the government hosta… https://t.co/45CxFwGsBO
— Ben_Franklin (@Ben_Franklin) 1547946925.0

@SenatorCollins You said shutdowns should never be used as a weapon to achieve an outcome then say you hope this pr… https://t.co/hpYwdu450L
— Beth Crowe (@Beth Crowe) 1547948832.0

The Senate is slated to vote some time on Thursday, but an exact time has not yet been set by Senate Majority Leader Mitch McConnell. The GOP Senator from Kentucky blocked all prior attempts to end the government shutdown.