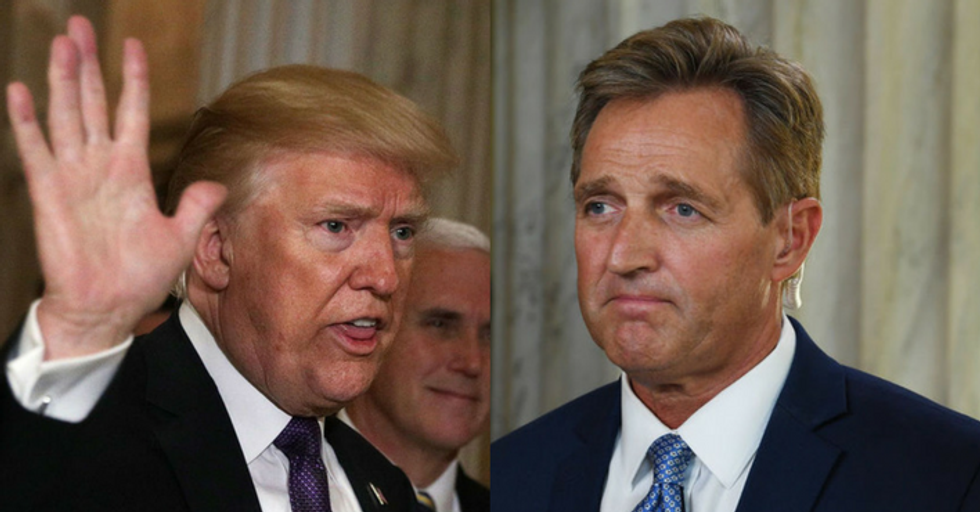 While talking to the mayor of Mesa after a town hall session in Arizona, Senator Jeff Flake apparently didn't realize the microphone attached to his lapel was still on. The KNXV microphone caught this statement referring to the GOP:

If we become the party of Roy Moore and Donald Trump, we are toast."

The Republican Senator, an outspoken critic of President Trump, announced last month he would not seek re-election.

In an interview at that same town hall, Flake indicated he'd "vote for the Democrat" if he were in Alabama with a choice between Moore, who's facing sexual misconduct allegations, and Democrat Doug Jones.

Senator Flake expressed concerns about the deficit in regards to the president's tax reform plans. However the Arizona Senator was expected to vote "yes".

Trump's Twitter taunt perplexed pundits. With such a small margin in the Senate, every Republican vote is vital. Why jeopardize one?

This is not the first sparring match between the senator and president.

Flake made an emotional Senate floor address to announce he would not run for another term in 2018. During that speech he took direct aim at Trump with a tone of defiance and frustration with the current state of affairs in Washington.

"I rise today to say, enough," Flake said. "We must dedicate ourselves to making sure that the anomalies never becomes the normal, with respect and humility. I must say that we have fooled ourselves for long enough that a pivot to governing is right around the corner, a return to civility and stability right behind it."

I will not be complicit or silent. I've decided to better represent the people of Arizona and to better serve my country and conscience by freeing myself of the political consideration that consumed far too much bandwidth and cause me to compromise too many principles."

President Trump attacked Senator Flake via Twitter many times before as well.