Next Round of Super Tuesday Results Gives Hope to Contenders 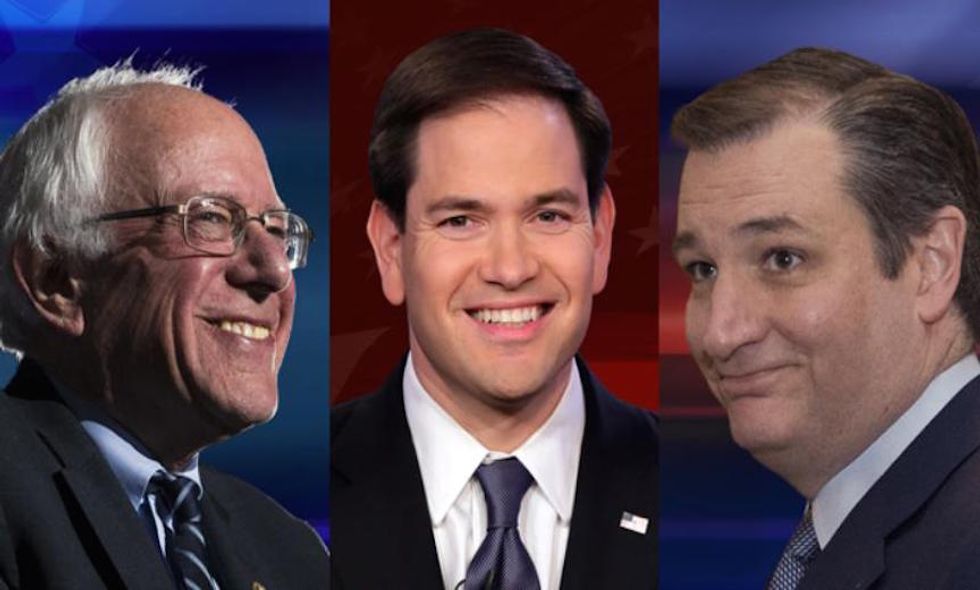 This article will be updated as further returns come in.

The second set of Super Tuesday results are in, and they reveal some surprising strength for Trump’s and Clinton’s rivals. Cruz took two states, Rubio was leading in early returns in Minnesota, while Sanders managed to snatch a non-Southern state from Clinton. These victories could portend a more competitive campaign than experts originally expected.

Clinton took the state of Arkansas with 68.3 percent of the vote, with 68 percent of precincts reporting. Legislators had moved the primaries up in Arkansas this year to give the state a more prominent position in the election process, and polls reported a strong turnout despite rainy weather. Clinton had hoped for broad support in the state she served as first lady during her husband’s time as the state’s governor, and she wasn’t disappointed. Although the state has voted Republican for the past four elections, her presence on the ballot could put the state back into play for the Democrats.

Trump, Rubio and Cruz all spent time courting the state’s 40 delegates. With 88 percent of percent of precincts reporting, returns showed a close race, with Rubio (29.6 percent) running a competitive second behind Trump (33.7 percent). Earlier in the day, Trump had received an endorsement from state Senator Jon Woods. However, Rubio’s showing could continue to embolden the anti-Trump factions.

Cruz enjoyed a sweet victory on Super Tuesday in Oklahoma, where voters gave him a 34.4 percent win. Cruz had spent several days campaigning in Oklahoma with Glenn Beck at his side. His message: “If Trump is the candidate, Hillary will win.” The threat motivated

voters to side with Cruz. Trump ran a respectable second place with 28.3 percent of the vote. Rubio came in a close third with 26% of the vote.

Sanders produced a decisive win in Oklahoma as well, winning with a 51.9 percent advantage over Clinton in the rural areas outside of Oklahoma City. Clinton took only 41.5 percent of the vote. “Oklahoma is a place where there is a tremendous amount of outsider, anti-establishment sentiment in the electorate and the electorate at large,” said Tad Devine, Sanders’ senior media adviser.

Despite concerns he was losing leverage to both billionaire Donald Trump and Sen. Marco Rubio of Florida in the polls, Cruz defied expectations in Texas. He leaves the contest in Texas with 43.8 percent of the vote and 99 additional delegates. Winning the state he’s called the “crown jewel” of Super Tuesday provides a significant boost to his campaign as he rallies more support in Southern states.

Clinton carried the delegate-rich state of Texas, as expected. The Texas Democratic primary was a victory for Clinton, though the margin of victory was much smaller than it was last week in South Carolina. She leaves the state with 65.2 percent of the vote and 61 additional delegates. Bernie Sanders leaves the state

with 30.5 percent of the vote and 42 additional delegates.

It’s been projected Sanders must win Colorado if he is to have any hope of winning the nomination. Colorado is home to a sizable amount of liberal voters who went against Clinton in 2008. Sanders, aware of this, spent a considerable amount of money on advertisements within the state. He also picked up endorsements from three of Fort Collins’ Democratic legislators (including Sen. John Kefalas) as recently as Sunday.

Colorado, North Dakota and Wyoming are holding their respective Republican caucuses this evening. There will not be a presidential preference poll in either Colorado or North Dakota, which will leave the choice up to their delegates by the time of the national convention on April 1. Thus, Colorado and North Dakota party leaders do not have to abide by the rule that pledges their delegates to a specific candidate. Surprisingly, GOP support in Colorado leans heavily towards Ben Carson, who has struggled to remain relevant in recent weeks.

Trump handily won in Alabama (44.2 percent of the vote and 28 delegates) as well as Tennessee (39.5 percent and 30 delegates ). Clinton also prevailed readily there with 79.1 percent of the vote, adding 33 delegates. Southern Democrats heavily favored her familiar face over Bernie Sanders. “America never stopped being great,”

she told supporters after the wins. “We have to make America whole.”

John Kasich had sharply criticized his opponents during a weekend stop in Tennessee, saying, “Enough of this trash.”

But trash-talking among the top three contenders didn’t keep them from besting him, and didn’t keep Trump from dominating the Republican field. Alabama State Senator Jeff Sessions endorsed Trump, citing the candidate’s stance on immigration as a shared policy standpoint. A vote of confidence from a sitting U.S. senator is considered a step forward in the Wall Street mogul’s journey to win over the party. It seems he’s already captured the party’s voters.

As results finally came in, it looks like the state that some want to be called “Northern” rather than “Midwestern" is also stepping out of line at the polls. Minnesotans were decidedly unimpressed with Trump, and he saw his worst Super Tuesday showing in the state, coming in behind both Rubio and Cruz. Rubio spent Tuesday campaigning in the state, and got his reward in the form of a nice lead of 36.8 percent of the vote, at 88 percent reported. Sanders made several visits to the state, drawing huge crowds, and those crowds came out for him again on Tuesday, pushing him ahead of Clinton with 59.3 percent of the vote with 65 percent of precincts reporting.