Sean Spicer Just Explained Why Sarah Sanders Is Better at Her Job Than He Was, and We're Not Sure That's a Compliment 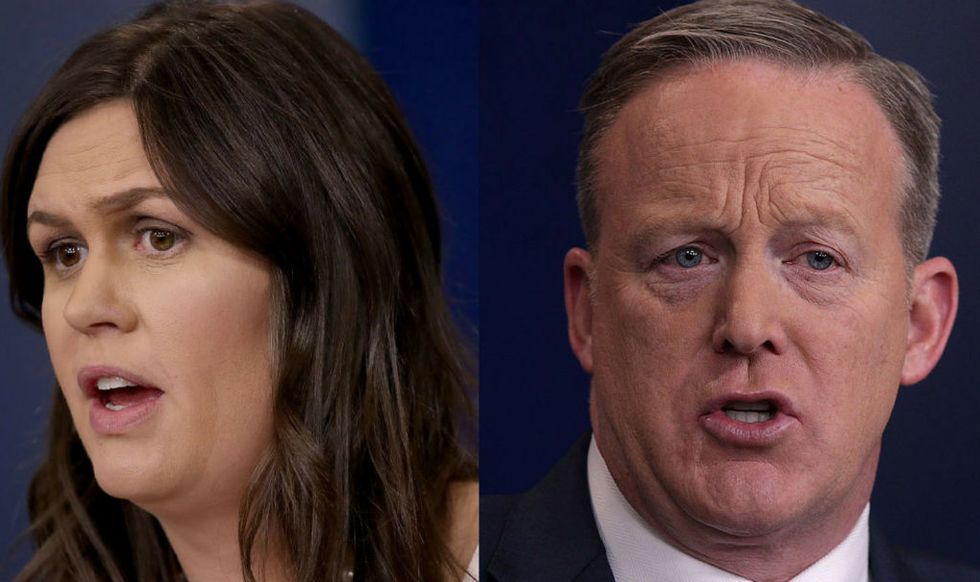 Sanders previously worked under Spicer as Deputy Press Secretary until Spicer's resignation. The kind words for his replacement come almost exactly a year after she was appointed:

I think Sarah has done a great job of making sure that she understands what the president wants. That was a challenge for me at the beginning. [Trump's] an unconventional candidate and president. He's a disrupter, and we were trying to adapt. And I think [Sanders] has done a good job of adapting to what he wants her to do and say and communicate his thoughts.

It's a frequent observation that obeying Trump's orders requires Sanders to lie to the press, something she's known to do. Spicer's tenure as Press Secretary was swollen with lies as well, starting right after President Donald Trump's inauguration:

This was the largest audience to ever witness an inauguration, period, both in-person and around the globe

Spicer made the claims despite photographic evidence and lower public transportation usage the morning of the inauguration. He would frequently be skewered after the comments and onward, most famously by Melissa McCarthy on SNL. In Tuesday's interview, Spicer expressed regret for the crowd size comments.

Though Americans on Twitter tend not to be fans of Huckabee Sanders, they're not willing to forgive Spicer any time soon.

@PhilipRucker I doubt Sarah Huckabee Sanders will be treated this well when she's out of a job, so why is everyone… https://t.co/vCTeIFgvEp
— Jay Nonymous (@Jay Nonymous) 1532017799.0

I am sitting here completely flabbergasted listening to Sean Spicer on the Today show. How can he and Sarah Huckab… https://t.co/993cDN3gzJ
— Chris Lefevre (@Chris Lefevre) 1531998858.0

The lies have battered both of their reputations.

Huckabee Sanders made waves when she was asked to leave the Red Hen Restaurant in Virginia last month. She made sure the public knew about it.

But many agreed with the owner's decision, and attributed that to Sanders' lies.

@PressSec @POTUS Ms Sanders- You claim that you were asked to leave the restaurant “because I work for President Tr… https://t.co/LU5fCZic8X
— Mia Farrow (@Mia Farrow) 1529957544.0

@PressSec @POTUS Your best is clearly not good enough. I watch you lie and obfuscate on behalf of @POTUS treating j… https://t.co/x0lHFQ4rPV
— snazzyoriginal (@snazzyoriginal) 1529855831.0

Spicer doesn't seem to be envious of the current Press Secretary's position, calling the job "relentless." But while lying may not have brought them the approval of the public, it's hard to see how it wouldn't benefit their boss––one of the most infamous liars of all.