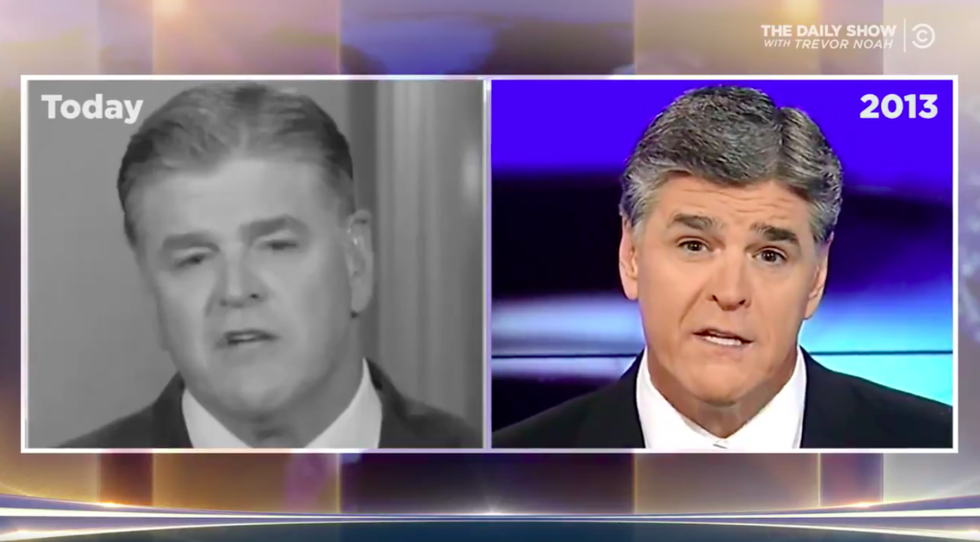 Fox News host Sean Hannity is one of President Donald Trump's most fervent supporters, and he's showered the president with nothing but praise for his meeting with North Korean leader Kim Jong Un. In return for his loyalty, the president granted him an interview from Singapore that aired last night.

But a Daily Show segment which was posted online ahead of the exclusive interview shows that Hannity did not support the United States negotiating with Kim Jong-un while former President Barack Obama was in office.

"I think that the president deserves a lot of credit for being willing to talk to somebody who everybody thought would be a bad idea," Hannity said of Trump last night.

In 2013, however, when Obama floated the idea of meeting with Kim, Hannity had quite the opposite reaction.

"Now is it just me, or does it look like President Obama is more willing to give his time to our enemies than our allies?" he told viewers in 2013.

Compare that to another statement Hannity made last night.

"I see a lot of parallels between President Trump and Ronald Reagan," Hannity said.

Now let's look back at what Hannity said about Obama:

"Barack Obama catering to dictators is literally the Neville Chamberlain of our time," Hannity said, referring to the former British Prime Minister who has been blamed for the Munich accord and for allegedly failing to prepare his country for war as Adolf Hitler's aggression escalated.

"Certainly there's no downside to what's happened here at all, only a win as far as I'm concerned," Hannity said last night.

But during Obama's presidency, Hannity said meeting with Kim would not be "wise."

"It's not wise. It's not in our best interest," he told viewers then. We're dealing with the world's worst dictators and we're showing a lot of weakness.

You can watch the side-by-side comparison below.

If Hannity at all fears that President Trump has legitimized the ruler of a totalitarian regime, he showed no concern last night; earlier yesterday, the president came under fire for screening a film which appears to exalt Kim despite his lengthy record of human rights abuses which include torturing, starving, and killing his own people and charges of indefinite detention.

Nor is Hannity the only figure at Fox News being exposed for hypocrisy on the matter of Kim Jong-un.

CNN's Oliver Darcy compiled a list of reactions from Fox News commentators and political figures who praised Trump for negotiating with North Korea, but slammed Obama for seeking to open trade channels with Cuba and speaking with Raul Castro, the Cuban ruler.

For example, Fox Business host Lou Dobbs, who criticized Republican Party leaders for "not applauding" Trump's North Korea accomplishments, once said that Obama's "doctrine is appeasement... Giving our adversaries what they want, receiving nothing in return. Who is the next dictator President Obama could reach out to, expecting them to unclench their fist?"

Similarly, GOP spokeswoman Kayleigh McEnany, who accused the president's critics of "rooting against peace," once said that Obama had a tendency to "befriend the enemies of democracy while trashing its allies."

A 2016 tweet from Mercedes Schlapp, director of strategic communications in the Trump White House, shows her apparent disgust over Obama's meeting with Castro: "next shakes hands with NK dictator Kim Un Jung?" she wrote.

None of these individuals have commented on their past statements.