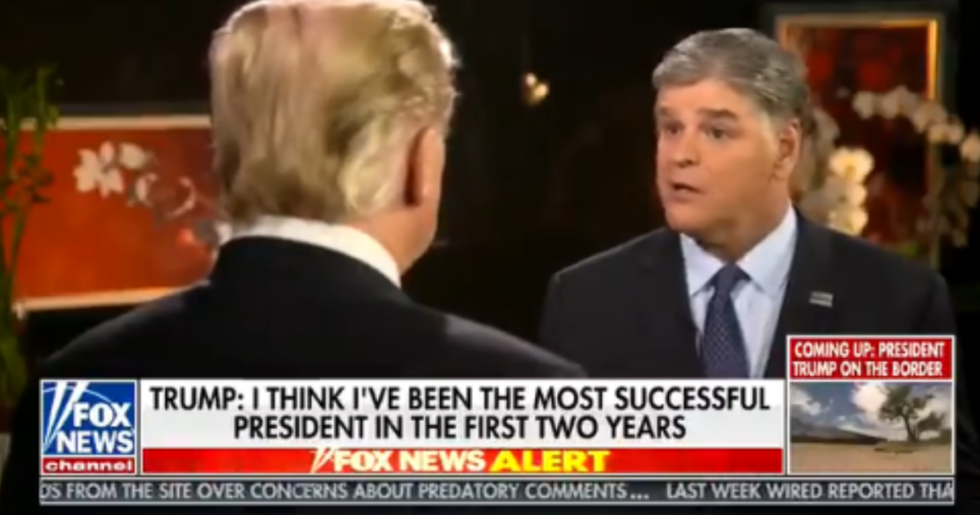 Fox News host Sean Hannity may have inadvertently given the House of Representatives a reason to subpoena him after he claimed on Thursday that Michael Cohen disclosed information to him about hush money payments to Stormy Daniels.

While interviewing President Donald Trump Thursday night, Hannity said Cohen told him that he made the payments to Daniels on his own volition.

“I can tell you personally, [Cohen] said to me at least a dozen times, that he made the decision on the payments and he didn’t tell you,” Hannity told Trump. “He told me, personally.”

To which Trump concurred: "Yeah, he did."

The problem with this, as CNN's Don Lemon pointed out, is that Cohen kept recordings of himself explaining to Trump how he would go about setting up the payoff.

Cohen, Trump's former fixer, told the House Oversight Committee on Wednesday that Trump knew of the payments to Daniels in the fall of 2016 and that Trump personally reimbursed him the following summer. Cohen even brought a copy of a check for $35,000 signed by Trump.

Cohen and Hannity are long-time buddies, after all. Last August, Hannity was revealed to be one of Cohen's clients. Hannity has denied the relationship.

Hannity's perjury accusation prompted Democratic Congressman David Cicilline (RI) to tweet Thursday night that "Sean Hannity is now volunteering himself as a witness. I look forward to his testimony."

Sean Hannity is now volunteering himself as a witness. I look forward to his testimony. https://t.co/eOjhlkg4mU
— David Cicilline (@David Cicilline) 1551409550.0

But legal experts who witnessed the exchange between Hannity and Trump agree that a subpoena would be the most appropriate course of action.

Cohen is a cooperating witness in the Southern District of New York's investigation into the president, his businesses, his charity, and his alleged involvement in campaign finance violations. Cohen, who will begin a three-year prison sentence in May, named Trump - "Individual-1" - as a co-conspirator.

Hannity just made himself a witness in a congressional inquiry and the SDNY probe https://t.co/pdSnvztayR
— Bradley P. Moss (@Bradley P. Moss) 1551408473.0

@rebeccaballhaus Sounds like Sean Hannity might be in line to give some Congressional testimony soon...
— Katie Phang (@Katie Phang) 1551407880.0

@rebeccaballhaus House needs to subpoena Sean Hannity and see if he sticks to that under oath. @AdamSchiff @RepCummings @AOC
— Sandy (@Sandy) 1551408909.0

The incompetence is astounding.

@joshscampbell It's amazing that these bumbling fools can't even manage to conspire with their co-conspirators properly.
— Polly Sigh (@Polly Sigh) 1551414217.0

How is this even real?

@joshscampbell Day in and day out the so called leader of the free world continues to embarrass himself and our country.
— Tony P. (@Tony P.) 1551459488.0