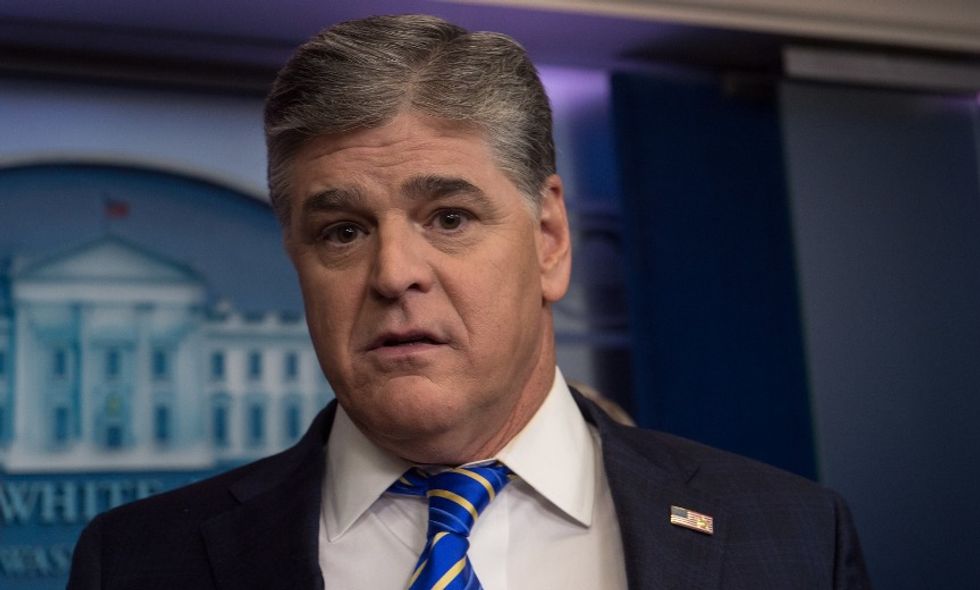 Fox News host and telephone therapist to President Donald Trump was asked on Wednesday when he thought President Trump would fire Special Counsel Robert Mueller. His answer seemed to betray a knowledge that such a firing is fairly imminent.

"Listen, I think all of that's going to happen," Hannity told a caller into his radio show on Wednesday. He added that Mueller would be fired "sooner rather than later," perhaps after Hurricane Florence had come and gone. Hannity acknowledged that the approaching hurricane should remain the administration's top priority, and that Mueller's firing would return to the top of Trump's to do list once it had passed.

Below is the transcript, courtesy of Media Matters:

CALLER: Trump has got so many people in his corner ready to fight, anything he can turn over or declassify, I can't understand why he wouldn't do it. What's he waiting for, one of his kids to get indicted or something?

And if they do get a special counsel to look into the investigators, can it be stopped by the Democrats if they take the House, and/or Senate?

And something else I thought about, if there -- for the investigation, the special counsel, to begin with, there was supposed to be a crime designated. If there's no crime designated, then can't Trump put an end to it?

I don't think it's going to happen on a week where 9/11 happened, it's -- to me, there's other things that we -- are more important to talk about, and I don't think with a big, massive hurricane about to hit the East coast of the United States, that looks like the real deal, that anybody's going to be focused on that. We've got to worry about our neighbors right now. We got to roll up our sleeves and be prepared to help out the people of South Carolina, North Carolina and elsewhere. That's where our focus is.

But afterwards, I would -- I would expect that he will do that.

Though Trump routinely refers to the investigation into possible collusion between his presidential campaign and Russia as a "witch hunt," dozens of indictments have been filed, and multiple plea deals have been struck.

"Those close to Trump see Hannity as an unofficial adviser to the president, which is pretty terrifying. The bottom line is, during the heat of the campaign when relationships are forged, [Hannity] was always there, offering good advice, in person and on television,” former deputy Trump campaign manager David Bossie told The Post. "The president sees [Hannity] as an incredibly smart and articulate spokesman for the agenda."

When it comes to the possibility of Trump firing Mueller, which he does not have the legal authority to do, at least directly, Hannity thinks Trump should do it anyway, because of reasons. Trump would have to fire Deputy Attorney General Rod Rosenstein (assuming Rosenstein refuses an order to do so). Trump would also face an uphill climb in getting the Senate to approve a new AG.

Why are Hannity and Trump so afraid of Mueller?

As we have been saying things will likely get weirder and worse before they get better and normal. Hold on.… https://t.co/sGqFSQFdSe
— Active Measures (@Active Measures) 1536775948.0

Hannity thinks Trump will move to end the Mueller probe “sooner, rather than later.” Hannity is wrong about one th… https://t.co/iZb9ZPyEGd
— Angry Staffer (@Angry Staffer) 1536754838.0

Really though, this is a pretty lousy plan.

There is a pattern here.

No matter how destructive hurricane Florence ends up being, it will look like a sun shower compared to the storm th… https://t.co/3ppLStCGAd
— GraniteTurtle (@GraniteTurtle) 1536784331.0

It never ends, does it?