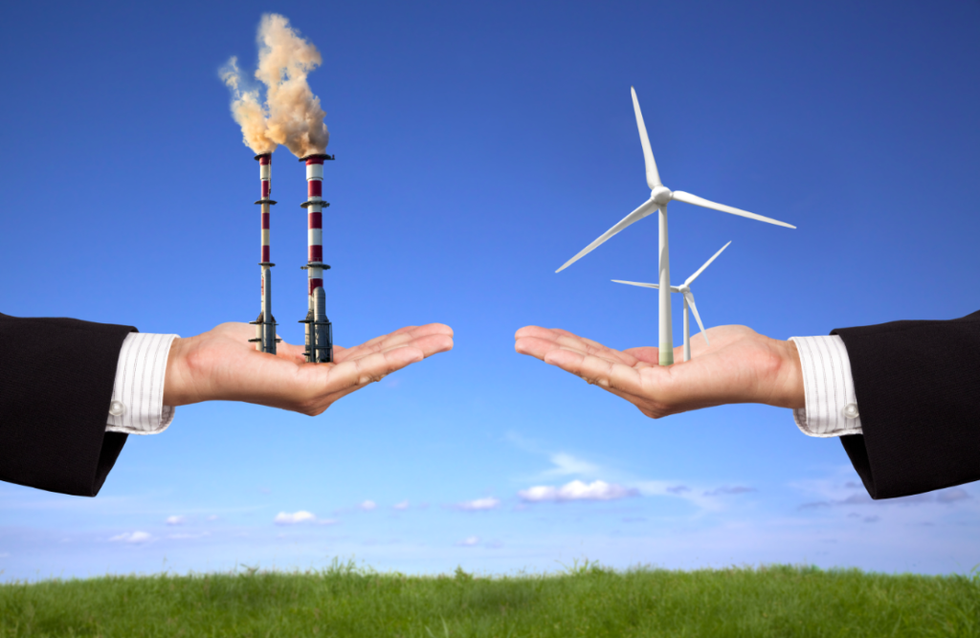 The answer, my friend, is blowing in the wind.

And shining through the heavens. And churning beneath the Earth. And roiling in the waves.

With climate change news running from bad to worse, especially in the wake of Hurricanes Harvey and Irma and the devastating South Asian floods, it’s worth noting that a funny thing happened on the way home from the Paris Climate Accords. With dramatic advances in technology, it’s now becoming practical for countries to not only meet their Paris commitments, but to greatly exceed them — and save money in the process.

For the first time, renewables are actually cheaper sources of energy than heavily polluting fuels. Even as the U.S. pulls out of the Paris Accord, advanced nations and developing countries like India and China are racing towards a more sustainable future because it provides the best return on investment.

A fascinating study in Joule, explained in Popular Science, chronicles how the world is capable of weaning itself off fossil fuels with far greater haste than scientists imagined a decade ago. According to study lead Dr. Mark Jacobson, professor of Civil and Environmental Engineering at Stanford University, it would be possible — with serious investment and commitment — for 99 percent of the world’s wealthiest countries to go 80 percent renewable by 2030, and 100 percent clean energy by 2050.

That's not only important, it’s crucial. Fossil fuels are not only becoming harder to access, they are threatening the welfare of future generations. Lord Nicholas Stern, British economist at the London School of Economics, argues in The Stern Review that unabated climate change will soon be costing governments five percent of GDP in mitigation and clean-up costs, and could eat up more than 20 percent of GDP — and possibly much more — if the worst effects are realized.

But the human costs are even more devastating. Cutting air pollution could save 4.6 million lives annually by 2050, with a concomitant cut in medical costs. Going to 100 percent renewables will  help ensure that number of climate refugees will be less than the 200+ million predicted by 2100.

The first step is to electrify everything, and we really mean everything. The transportation industry, the ways we heat and cool our houses, and agriculture and industry. It surprises many to learn that once electrification is completed, energy usage drops precipitately.

The fossil fuel industry has many dirty secrets, but one of the dirtiest is that gas, oil and coal are incredibly inefficient. The best cars on the road today only convert about 17 to 20 percent of the fuel burned into the energy that take the chassis from A to B. With electric vehicles, the efficiency is four times that figure. No wonder France and Britain have committed to all-electric cars by 2040. Germany will do so a decade earlier.

Similarly, the massive coal or gas power plants that electrify most cities have long periods of wastefulness, where they cycle and burn fuel waiting for the peak energy periods every morning and evening. These plants can never be shut down in case demand spikes. As a result, even the best-used coal plants are only 33 to 40 percent efficient, with some state-of-the-art plants doing slightly better..

But renewables have a far better solution, allowing more wind and solar power to be converted to useful energy. Battery technology is improving steadily, so huge batteries in homes would store enough energy to run a house for half a day or more. During peak periods, say just after the evening commute, connecting the car to a well-designed smart home allows the car battery to be drained to supplement energy use in the house so it needn’t draw from the grid. Later, when night falls, both home and automotive batteries can be recharged overnight when demand is low, and electricity rates are far lower.

What does all this mean? Averaged across all sectors, a completely electrified grid cuts energy usage by 23 percent. A further 13 percent efficiency is achieved by recovering the energy used to find new resources of fossil fuel energy and bring those sources to market. So we can cut consumption by at least 36 percent, and possibly even more.

It goes without saying that every stage of renewable energy infrastructure is cleaner. Instead of oil spills we have sun spills, which are otherwise known as really great days. Instead of wind pollution, we have prime kite flying days.

Some big “renewable energy” players won’t be needed in this brave new world. When Germany announced that it would meet its Kyoto Commitments even as it mothballed nuclear plants, many felt the country had lost its way.  But according to Jacobson and his colleagues, we won’t need nuclear.

“I was surprised by how many countries we found had sufficient resources to power themselves with 100 percent wind, water, and solar power,” says Jacobson. The strategy his colleagues devised also creates conditions for energy independence, with few countries being forced to purchase energy from their neighbors. It’s not that energy won’t cross borders from time to time, as the modern grids we need to build will connect country to country. Even the best planned systems will require some ebb and flow between states or countries to support each other during periods of peak demand. But most countries will have balanced systems.

Renewables will also bring power to the people. The wave of the future is for individuals and communities to design systems that meet their own energy needs, by mixing and matching some technologies like solar and onshore and offshore wind farms, rooftop solar and solar tiles, hydroelectric energy, and, finally geothermal, wave and tidal energy (to a far lesser extent). In some cases, but not all, industry will return to small communities as we move away from the huge power plants run by enormous conglomerates.

If we take this path — and to not to take it would be tantamount to a death wish — we’ll also create an additional 25 million jobs in the green sector,  and save about $50 trillion a year in climate change and pollution mitigation costs.

“We think a transition is possible and is beneficial in multiple ways, and there's little downside to a transition,” says Jacobson. “Like anything, you don't want to change—and it’s hard to change if something is working right now. But right now things are working with humongous side effects.”