What is the Large Hadron Collider Looking For? 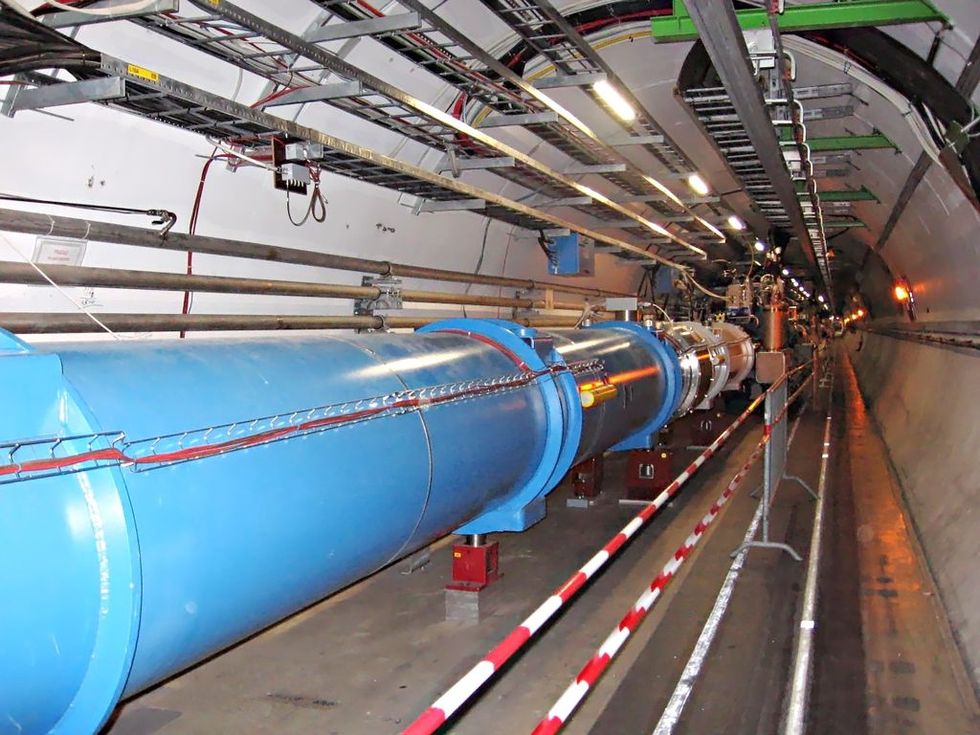 A bunch of protons walk into a bar. One turns to the others and says, “Is it just me or are we all on the verge of a breakdown?”

Protons are once again breaking down in the name of scientific discovery. In early April, preliminary test runs of the retooled Large Hadron Collider (LHC) began generating renewed excitement among physicists at the European Organization for Nuclear Research (CERN). CERN is the research campus near Geneva, Switzerland, where the LHC, a circular tunnel with a circumference of 27 kilometers (17 miles), is buried underground at an average depth of 100 meters (328 feet).

For the past two years, the LHC has been offline for repair, maintenance and intense improvements. Scientists brought it back to life on Easter Sunday—fitting, as the LHC’s last gift to physics was the Higgs boson, occasionally and controversially referred to as the “God particle.”

What is the Large Hadron Collider?

The LHC is the result of a collaborative effort of hundreds of scientists and engineers around the world. In September 2008, the $10 billion accelerator made a spectacular debut at CERN by firing beams around the ring in both clockwise and counterclockwise directions, and began breaking records in the field of particle physics.

Physicists use particle accelerators to hurl charged subatomic particles at each other at tremendous speed. In doing so, they hope to produce smaller particles. When two small masses collide, they explode, break into smaller masses, and sometimes recombine in exotic ways. These “recombinations,” along with other data collected during the collisions, allow physicists to test predictions made by the Standard Model of particle physics. The Standard Model is a series of equations that predicts how all known particles and forces in the universe interact with one another.

The LHC is the most powerful particle accelerator ever built. With an overall volume equal to 76 Olympic swimming pools, it’s also the largest single machine in the world. The LHC batters beams of protons into each other at near the speed of light. Each beam, less than a hair’s breadth in diameter, is controlled by powerful magnets. Radio waves in the collider’s tunnel further accelerate the protons. When the protons slam into each other, they create tiny explosions and release intense bursts of energy. Researchers then analyze the resulting debris in hopes of unveiling new particles, as they did with the Higgs boson.

The energy the LHC generates sets it apart from other particle accelerators. During its maiden voyage from 2010 through 2012, beams of protons were blasted around at up to 4 trillion electron volts, or 4 TeV. (TeV is a unit of energy used is particle physics. For comparison, visible light particles have energies around 1.8 - 3.1 eV, and x-ray particles have energies of 124 eV.) What’s more, when accelerated protons collide, they release up to twice their original energy. Now, improvements to the LHC allow beams to run at 6.5 TeV and create collisions that release up to 13 TeV.

Watch this video to learn how the LHC generates such high energies:

A series of accelerators work together to push particles to nearly the speed of light. Source: CERN

After the LHC’s Easter reboot, physicists began running low-energy test events to calibrate the machine and confirm its systems were functioning as expected. On May 21, protons in the LHC collided at 13 TeV for the first time. These tests are intended to set up systems to protect the machine and its detectors from stray particles. If all goes according to plan, the LHC will start sustained high-energy collisions in early June.

During this second phase of experiments, the LHC will smash about five times as many protons in the next three years as it has to date. A steady flood of data will make its way to thousands of scientists and Ph.D. students around the world, and the massive analysis effort will begin.

To prepare the LHC for its next run, 18 of the 1232 superconducting magnets were replaced; more than 10,000 electrical interconnections were reinforced; new sets of radiation-resistant electronics were added; the vacuum system, which keeps the beam pipe clear of stray molecules, was upgraded; and the cryogenics system for the LHC's magnets was refurbished.

CERN’s IT department was also upgraded with almost 60,000 new cores and over 100 petabytes of additional disk storage to accommodate the increased amount of data the new experiments will generate. Upgrades were made to the networking infrastructure, including the installation of new uninterruptible power supplies.

What has the LHC already discovered?

To date, the LHC's most significant finding was the discovery of the Higgs boson, an elementary particle predicted by François Englert and Peter Higgs in the 1960s. The race to confirm the existence of the particle concluded in July 2012 when researchers announced they had, in fact, detected the Higgs boson after three years of experiments at the LHC.

Pinpointing the existence of the Higgs boson was a huge step in helping physicists explain why other subatomic particles are perceived to have mass. The Higgs boson was theorized to exist as part of the Higgs field, an invisible field that permeates all of space in the universe. Physicists believed that interaction with this field exerts a drag on every particle, giving them mass, or a resistance to being moved. As Brian Greene wrote in Smithsonian Magazine:

“Think of a ping-pong ball submerged in water. When you push on the ping-pong ball, it will feel much more massive than it does outside of water. Its interaction with the watery environment has the effect of endowing it with mass. So with particles submerged in the Higgs field.”

The Higgs field is a key component of the Standard Model, making sense of the rest of its equations. Thus, confirmation of its existence has served to support the model. And a new study, published on May 13 in the journal Nature and cited in a CERN press release, draws upon data from previous experiments during the LHC’s first run. This study claims another discovery consistent with Standard Model predictions—the extremely rare decay of the "strange" B meson. This decay process was predicted to occur just four times in every 1 billion decays, but it had yet to be confirmed with the statistical precision necessary to claim an observation in experimental physics. This new finding, mined from old data, further supports the Standard Model—for now.

What is the LHC looking for next?

Particle physicists’ research is not intended to reinforce the Standard Model. As LHC scientist Patrick Koppenburg told Vox, “It's extremely efficient at making predictions, but we physicists don't really like it.”

Why scientists would want to disprove a model that has been so accurate and useful in understanding the universe is quite simple: it’s incomplete.

As successful as it has been, the Standard Model accounts for just five percent of the universe comprising energy and visible matter, posing more questions than it answers. With the new and improved LHC, scientists hope to find “new physics,” a first step in explaining the 95 percent of the cosmos that remains a mystery.

Hence the excitement surrounding the LHC’s second run. "We're hoping to find things that were not predicted by the standard model," Koppenburg says. "Perhaps particles that are so heavy that they haven't been produced before, or other kinds of deviations."

The “deviations” to which Koppenburg refers are crucial to revealing the smallest building blocks of the universe, yet so many are still missing. The Standard Model doesn't explain the force of gravity, for example, or phenomena such as dark matter and antimatter. Nor is it consistent with theories about the birth of the universe. With the next run of the LHC, scientists will tackle those mysteries by searching for or analyzing new physics including the following.

Why does matter… matter?

The purpose of the LHC is to recreate the conditions that existed moments after the universe was created, in part to test the Big Bang theory. By replicating the energy and temperature of that moment, scientists hope to understand the birth of the universe and how it has evolved, as well as what governs its behavior today and what it might look like in the future.

Unless you happen to be a particle physicist or an avid science buff, you’re probably wondering what practical applications the LHC holds for the future. Again, the answer is simple: no one knows. While many scientists conduct research with a specific goal (e.g., finding a cure for cancer), that's not why researchers built the LHC.

Past experiments at CERN have, however, yielded breakthroughs that benefit research in other fields. For example, the synchrotron, technology developed for the LHC, is now being used to treat cancer patients with “proton beam therapy” (PBT). As reported by Quartz, “...compact versions [of the synchrotron] are harnessed in PBT machines to help precisely focused proton beams eradicate cancer cells.” While advances such as these cannot be anticipated, they also shouldn’t be ruled out entirely.

Particle physicists must embrace the unknown even as they try to explain it. That’s the beauty of the scientific search for knowledge. The ambiguity may at times be frustrating, but the lack of expectations effectively removes limitations to what researchers may unveil, and how their discoveries will impact our world.

Still, it must feel great to have one’s work validated, especially after 50 years. At a 2012 press conference at the University of Edinburgh, Peter Higgs was asked whether he felt vindicated by the confirmation of the eponymous particle. He said: "It's very nice to be right sometimes."

For more stories like this, check out Large Hadron Collider Scientists Hope to Make Contact with Parallel Universe.