This Energy Harvesting Yarn Is the Future of Wearable Tech 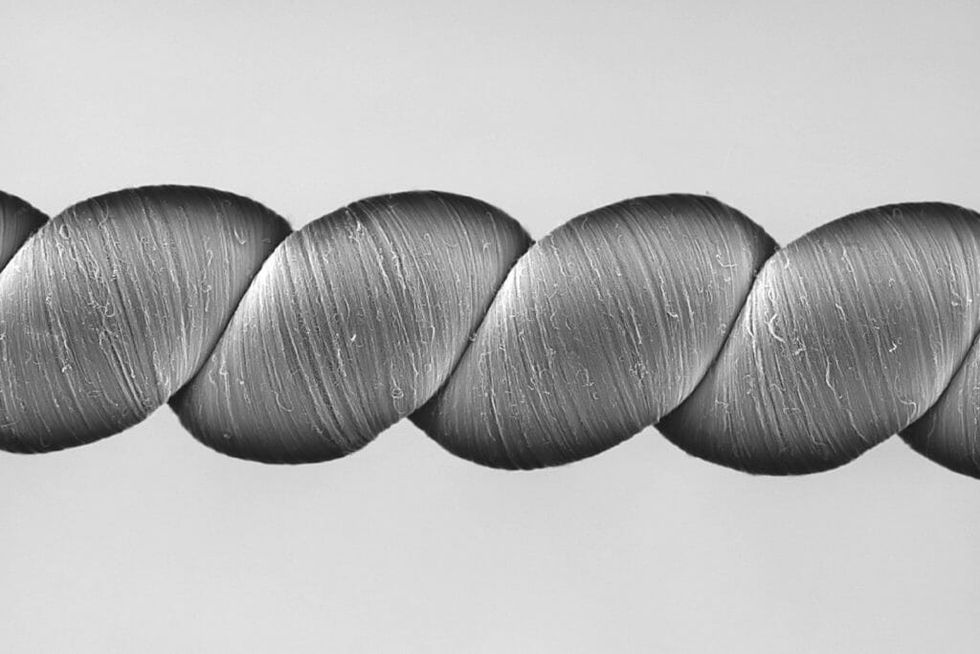 Researchers have created energy-harvesting yarn from tightly coiled carbon nanotubes, which can be activated by the electrolytes in a simple saline solution. With no need for a battery, these “twistron yarns” have numerous potential applications in wearable, medicinal and oceanic contexts.

How twistron yarn is made

An international research team led by scientists at The University of Texas at Dallas (UT Dallas) and Hanyang University in South Korea constructed the yarn from carbon nanotubes—hollow cylinders 10,000 times smaller in diameter than a human hair. After twist-spinning sheets of carbon nanotubes—with a motion similar to a spinning wheel—to create strong, lightweight yarns, researchers introduced elasticity with additional twist until the yarns coiled akin to an over-twisted rubber band.

“We just have little electric motors, and we turn on the power and it spins. And we can attach that sheet to the motor, and it spins into yarn—just like you’re making sheep’s wool,” according to lead author Carter Haines, a nanotech researcher at the UT Dallas. “The one additional trick is we twist the yarn to a very high degree until it starts to coil on itself. Under the right conditions, you’ll get a nice coil like a spring, and if you get the spring, you have the stimulus you need to create electricity.”

Haines further simplified the scientific process, saying: "The easiest way to think of twistron harvesters is, you have a piece of yarn, you stretch it, and out comes electricity."

Haines explained that during the twisting process, the volume of the yarn decreases, which brings the electric charges closer—thereby increasing their energy. This allows for the harvesting of electricity, by increasing the voltage coupled with the charge stored in the yarn. The study showed a twistron yarn that weighs less than a fly can light a small LED.

The yarn requires an electrolyte wash for its power source, such as a simple mixture of table salt and water, which will render the ions conductive.

Dr. Na Li, a research scientist at the NanoTech Institute and co-lead author of the study said, "Fundamentally, these yarns are supercapacitors." Li added, "In a normal capacitor, you use energy—like from a battery—to add charges to the capacitor. But in our case, when you insert the carbon nanotube yarn into an electrolyte bath, the yarns are charged by the electrolyte itself. No external battery, or voltage, is needed."

The UT Dallas study reports that the carbon nanotubes yarn produces more power than any other energy-harvesting device ever developed. Another co-author, Dr. Ray Baughman, director of the NanoTech Institute, explained that stretching coiled twistron 30 times per second created 250 watts per kilogram of peak electrical power, after being normalized for the harvester’s weight.

Baughman said, "Although numerous alternative harvesters have been investigated for many decades, no other reported harvester provides such high electrical power or energy output per cycle as ours for stretching rates between a few cycles per second and 600 cycles per second."

In short, according to Baughman, "There's basically no game in town which gives comparable power output to our yarns.”

Despite researchers’ pride in their newfound nanotube power source, energy-harvesters aren’t powering large items such as automobiles and houses. Instead, they are ideal for technology when changing batteries is impractical, according to Yu Jia from the University of Chester in the UK. For instance, previous versions of energy harvesters have powered sensors under a bridge and underneath trains for maintenance and testing purposes. The jostling of the trains on the tracks or cars on the bridge stretched the energy-harvesters to create electricity.

With the latest yarn triggered by electrolytes, researchers were encouraged to apply the technology to wearables—sewing twistron into workout clothing that would be activated by movement and perspiration.

As reported in the study, “The rise of small-scale, portable electronics and wearable devices has boosted the desire for ways to harvest energy from mechanical motion. Such approaches could be used to provide battery-free power with a small footprint.”

During the study, scientists sewed strands of twistron into a shirt where normal breathing stretched the yarn and triggered an electric signal. In fact, 16 millivolts of electricity were produced each time the wearer of a tight-fitting shirt—which contained two short pieces of twistron yarn—inhaled.

Even if twistron yarn couldn’t fully charge a cellphone, it could give a power boost to such a device, a fitness tracker, or send wireless messages about the wearer’s health to a router. For these technologies, a wearer only needs to work up enough of a sweat to keep the few strands of woven twistron activating every few minutes. The energy harvesting yarn may even be able to change the color or pattern of the fabric.

"Electronic textiles are of major commercial interest…” Baughman said. “Our yarns produced over a hundred times higher electrical power per weight when stretched compared to other weavable fibers reported in the literature."

He said the team’s research has led to further inquiries from the medical field, which is always looking for new ways to monitor patients’ health.

The study also explored using ocean waves to stretch the twistron harvesters, by attaching the ends to buoys. The natural salinity in the water triggered the electrical response as the buoys moved in the water.

"In the lab we showed that our energy harvesters worked using a solution of table salt as the electrolyte," Baughman said. "But we wanted to show that they would also work in ocean water, which is chemically more complex.”

Using the ocean provides many practical applications where batteries are difficult to change.

“The navy would love to have thousands of buoys dotted around the ocean, measuring pollution levels, temperature, and then relaying that information back to shore,” according to Baughman.

As part of the study, co-lead author Dr. Shi Hyeong Kim—a postdoctoral researcher at the NanoTech Institute—planted a twistron in the sea off the South Korean’s coast. He attached 10 centimeters of yarn, weighing one milligram, to a balloon on one end and a sinker on the sea floor on the other. The balloon rose each time a wave passed, stretching the yarn 25 percent and demonstrating the production of electricity.

The study also showed that the amount of energy produced by twistron yarn can be augmented by increasing diameter of the twistron and by placing numerous yarns in parallel position.

"If our twistron harvesters could be made less expensively, they might ultimately be able to harvest the enormous amount of energy available from ocean waves," Baughman said. "However, at present these harvesters are most suitable for powering sensors and sensor communications. Based on demonstrated average power output, just 31 milligrams of carbon nanotube yarn harvester could provide the electrical energy needed to transmit a 2-kilobyte packet of data over a 100-meter radius every 10 seconds for the Internet of Things."

To demonstrate how twistrons can harvest energy to power the Internet of Things, Li attached a twistron to a polymer artificial muscle designed to contract and expand when it heated up and cooled down. Proving that energy harvesters can extract waste thermal energy from the environment, the twistron transformed the mechanical energy made by the artificial muscle to electricity.

"There is a lot of interest in using waste energy to power the Internet of Things, such as arrays of distributed sensors," Li said.

Even though nanocarbon twistron-harvesters already produce sufficient power for some applications, they are still too expensive and time-consuming for commercial use. But based on this most recent progress, Baughman anticipates it won’t be too long until that changes.

“This is the first discovery of a harvester based on a twist process, but it’s only a baby. We’ve still got a lot to learn,” he said.