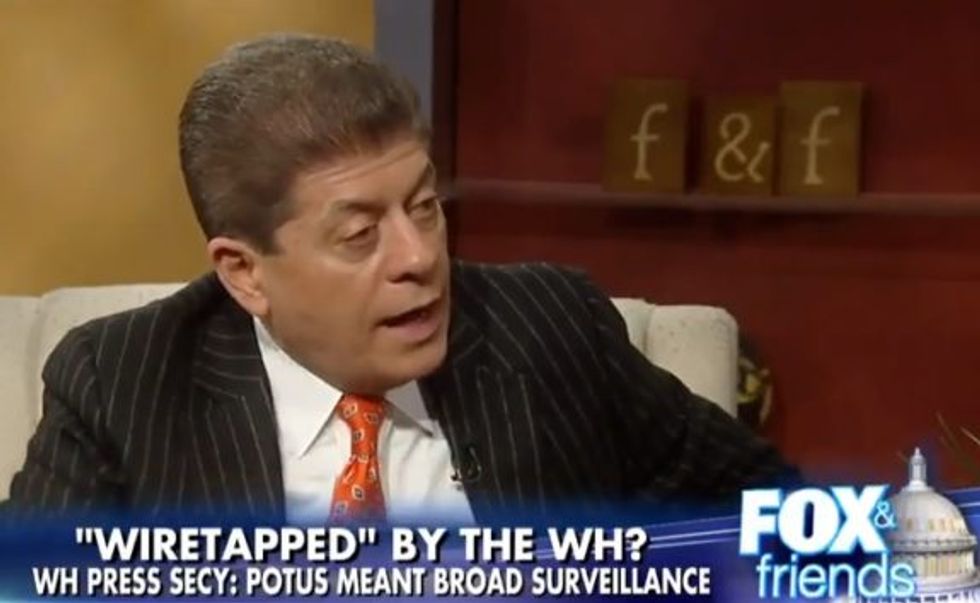 Senior judicial analyst Andrew Napolitano will not appear on Fox News for an unknown period of time. The former judge, who had been a regular guest on many of the network's programs, has not been on the air since last Thursday.

During Fox News coverage of President Donald Trump's tweets accusing former President Barack Obama of wiretapping, Napolitano said that "the British foreign surveillance service, the Government Communications Headquarters, known as GCHQ, most likely provided Obama with transcripts of Trump’s calls." His claims were then repeated by Sean Spicer in one of the press secretary's attempts to defend the president's rant.

GCHQ and the Great Britain's prime minister's office both denied the claims. A spokesperson for Teresa May said, "We've made clear to the US administration that these claims are ridiculous and should be ignored. We've received assurances that these allegations won't be repeated."

GCHQ issued a statement saying, "Recent allegations made by media commentator Judge Andrew Napolitano about GCHQ being asked to conduct ‘wire tapping’ against the then President Elect are nonsense. They are utterly ridiculous and should be ignored."

Despite the angry denials from the British government, Trump also cited Napolitano's comments during a press conference with German Chancellor Angela Merkel on Friday. "You shouldn’t be talking to me, you should be talking to Fox News,” the president said.

Napolitano had said on air that "Fox News has spoken to intelligence community members who believe that surveillance did occur, that it was done by British intelligence.” But on Friday, anchor Shephard Smith denied that claim, saying, "Fox News knows of no evidence of any kind that the now-president of the United States was surveilled at any time, in any way."