The First Flying Car Is Set to Roll Out Next Year, But It's Far From the Image We Have From Science Fiction 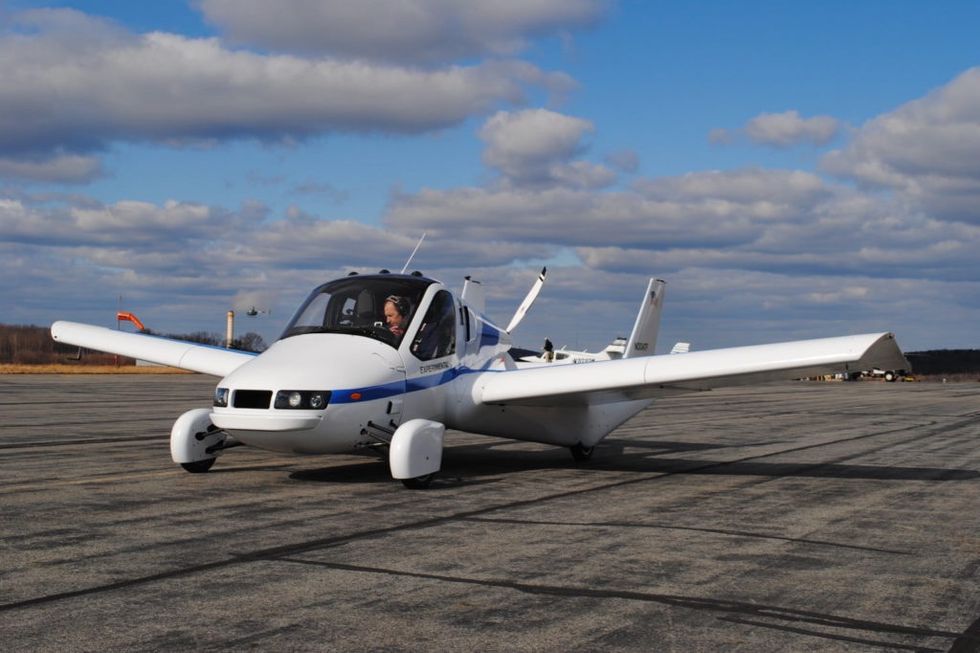 Many may recall the blockbuster 1989 sequel to Back to the Future that took place in a speculative 2015. Its depiction of the future was surprisingly accurate about several things: a national baseball team based out of Florida, flat screen televisions, voice-activated appliances, and flying drones. However, the most glaring prediction that the filmmakers got wrong was the invention and implementation of flying cars. But maybe only by a few years. A company based out of Massachusetts is set to begin selling its vision of the world’s first flying car next year.

The American public has been enamored with the notion of personal air transportation going back well over a century. In 1841, a patent was issued for the Henson-Stringfellow aerial steam carriage, though the gentlemen that conceived this version of a flying car failed to produce a functional model. Later, in 1917, Glenn Curtiss manufactured an autoplane constructed from aluminum that was complete with plastic windows and internal heating. This flying car creation was shown at the Pan-American Aeronautical Exposition in New York, but the vehicle never flew and development was halted by World War I.

In 1923, a flying vehicle called the Pitcairn PCA-2 landed in front of the White House during President Hoover’s administration. This iteration has been classified as an “autogyro,” which appeared like a normal airplane, but with a propeller on top like a helicopter. Intriguingly, the PCA-2 was actually marketed and sold to certain individuals. A device resembling the B-2 stealth bomber was briefly manufactured in 1937 called the Waterman Aerobile. A few years after World War II, a flying machine called the ConVairCar Model 118 that looked like a regular car of its time topped with a single propeller airplane was constructed and flown, though it crash-landed during its first flight dooming its future. Ford proposed a futuristic looking Levacar in 1959, though none were ever built.

The first true road-to-sky flying car called the Aero-Car was constructed in 1966 and achieved speeds of 60 miles per hour on the ground and 110 miles per hour in the air. This historical entry in the race to make flying cars a reality inspired Disney to create a character modeled on the design in the 2013 movie Planes. Subsequent entries include, but are not limited to: the 1973 AVE Mizar, the 1990 Sky Commuter, and the 2003 M400 Sky-Car.

All this may culminate in the imminent commencement of sales for the latest personal flying vehicle produced by a company called Terrafugia, whose earliest prototype first took to the air in 2009.

The Terrafugia Transition is the first of its kind airplane/automobile hybrid that transforms from an automobile to an airplane in less than one minute. The vehicle has four wheels, wings that alternate from being folded around the passenger section to extending outward from it, and a rear propeller described as a “pusher.” The design and production of this version of a flying car have been in development since the founding of Terrafugia in 2006.

Geely has confirmed to me it is now taking orders for the Terrafugia Transition flying car. Initial deliveries will… https://t.co/NwMuIbBNzf
— Greg Kable (@Greg Kable) 1540370517.0

Unfortunately, there are limitations to the general public accessing the Transition. The first is its rather hefty price tag of approximately $400,000 per vehicle. Secondly, the Transition is not going to be able to rescue you from a rush hour traffic jam. Like its airplane cousins, the Transition will require a runway to be able to take flight. Finally, the only people that will be allowed to operate a Transition in the air will be licensed pilots.

The second obstacle will be eventually surmounted as Terrafugia is in the planning stages for a vehicle that will have vertical liftoff capability. However, this newer model air/car hybrid called the “TF2” is not expected to be available for purchase until 2023.

Although there is certainly excitement for the debut of the world’s first functional flying car, its time may already have passed. News stories have already circulated regarding autonomous flying drones capable of transporting at least one human passenger. Other reports have described so-called “air taxis” that unlike the Terrafugia Transition do not require a runway and lift off and land vertically. These alternative approaches to flying passenger vehicles are fast on their way to being brought to market by notable aerospace manufacturers including Airbus and Volocopter.

Indeed, aerospace engineering professor Richard Anderson notes that “the world changed while they were working on that vehicle,” referring to the Terrafugia Transition.

Just last year, Volocopter tested its prototype air taxi in an unmanned 5-minute flight above the city of Dubai. The battery-powered air taxi is a drone-like vehicle with enough space for two passengers and flies via 18 propellers. The CEO of Volocopter envisions air taxis to be no different than hailing an Uber. Even Uber is hoping to venture into the arena of air taxis, suggesting that it would try to have air taxis in the skies over Dallas-Fort Worth by 2020. The air taxis are also designed with multiple backup features to prevent crashes, so that if one piece of equipment failed, a redundant counterpart would automatically kick in.

Essentially, a customer would hail an air taxi via a cell phone app just like they might currently do with Uber, and the passenger will head to a nearby helipad. The landing pads would theoretically be scattered about the city in parking lots, on rooftops, and other locations. The passenger would get in and be flown to another helipad in proximity to the customer’s desired destination.

Importantly, the CEO of Volocopter does not want this to be a service limited to the super rich. While it would never be as cheap as a standard taxi or Uber car ride, Volocopter intends for their air taxis to be priced reasonably enough that everyday people could afford it. Given the economics of publicly available air taxis, would people line up to purchase a relatively expensive Terrafugia Transition?

Experts in the field have concluded that the overall cost and the expertise necessary to operate a Transition will likely make the airplane/car hybrid a niche product.

Perhaps, the biggest hurdle that must be overcome for flying cars to become a reality is the approval of agencies tasked with regulating air/space traffic. Case in point: this past summer, the United States Federal Aviation Administration (FAA) debated with Uber at the Uber Elevate Summit in Los Angeles over how Uber air taxis would take to the skies.

Administrator Dan Elwell stressed the FAA’s position on the issue: “we’re the safety regulators; we’re going to come at this from a safety perspective.” He further stated, comparing current unmanned drones, that “when you put passengers on autonomous vehicles, as opposed to delivering a package, you introduce a much, much higher bar you need to get over.”

The airspace that Uber and other companies are proposing to deploy their air taxis and other personal air transport vehicles is tightly controlled by the FAA, and its approval to operate in those areas is unlikely to come easily. A serious issue that must be addressed is how personal flying cars and air taxis are going to share the skies with current commercial aircraft.

Uber’s Jeff Holden proposed at the Uber Elevate Summit that the FAA section off a segment of airspace around major cities like Dallas-Fort Worth that commercial aircraft would not be permitted to enter where air taxis and flying cars could freely operate. This idea was not embraced by Elwell, who said that “segregated airspace” is “where we don’t want to go.”

In an effort to eventually win over permission from the FAA, Uber has a continued partnership with the National Aeronautics and Space Administration (NASA) to develop a feasible strategy to tackle the air traffic issues that would result from the emergence of small passenger aircraft. The outcome of such planning will have a profound impact on whether people will soon have access to air taxies and flying cars like the Terrafugia Transition.

Once a dream of science fiction aficionados, it does seem that the flying passenger vehicle is closer than ever to being a reality. As Doc Brown said in the beginning of Back to the Future II: “Roads? Where we’re going, we don’t need roads.”