Telescopes Finally Captured A Gamma-Ray Burst, The Most Powerful Explosion In The Universe

Scientists used telescopes to capture a gamma-ray burst as it happened. 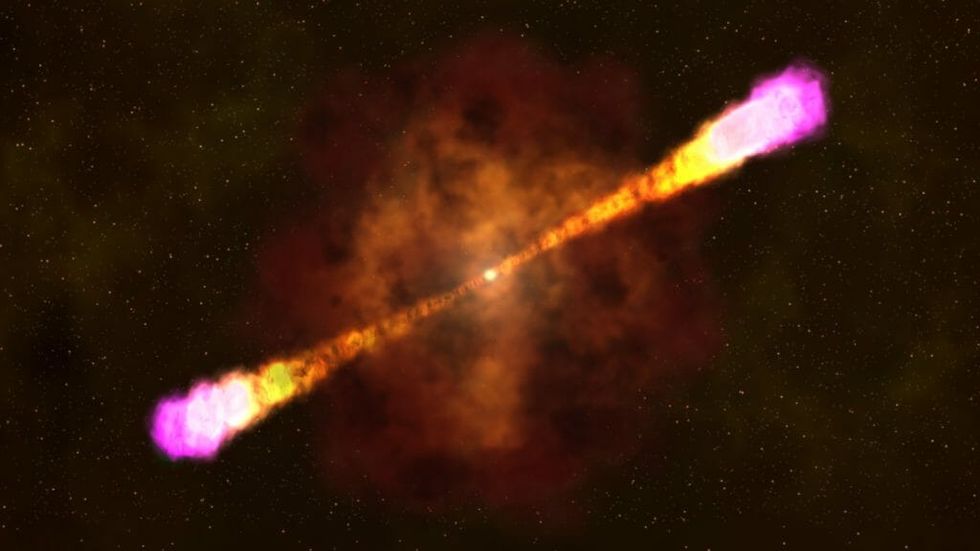 Gamma-ray bursts are the most intense, violent and powerful explosions in our universe, surpassed only by the Big Bang itself. Scientists know they exist; we’ve been tracking them for nearly 50 years. But the specific cause of these intense sources of energy has remained a mystery to us. Now, scientists have used telescopes to capture a gamma-ray burst as it happened, and they may have narrowed down exactly how they work.

These violent explosions originate when stars much larger than our sun go supernova and collapse into either neutron stars or newly formed black holes. The power within these bursts is extreme; they release in less than a minute as much energy as our Sun does over the course of its life. It’s not easy to directly observe these phenomena, though, because they are unpredictable and don’t last very long. But on June 26, 2016, scientists got lucky. “[This gamma-ray burst] was very bright and produced a very short flare that lasted just 1 second before the main explosion began, so our telescopes were ready to capture the visible light at the same time as the high energy gamma rays from the explosion itself,” explained Carole Mundell to theInternational Business Times, co-author of the study published in Nature. “It was so bright, it could have been seen through binoculars.”

But there are mysteries surrounding gamma-ray bursts; we know they occur when stars collapse in on themselves. What we don’t know is exactly which processes release this incomprehensible amount of energy. Until recently, there have been two prevailing theories. Scientists basically agree that when a star collapses, jets of ionized particles are thrust into space at speeds close to that of light. But where they diverge is on how those jets are propelled. Are they controlled by matter or by a magnetic field from the black hole?

The answer seems to lie somewhere in between. “We find evidence for both models, suggesting that gamma-ray burst jets have a dual, hybrid nature. The jets start off magnetic, but as the jets grow, the magnetic field degrades and loses dominance,” said Eleonora Troja, a scientist at the University of Maryland Department of Astronomy. “Matter takes over and dominates the jets, although sometimes a weaker vestige of the magnetic field might survive.”

Additionally, the team may have pinpointed the source of the burst’s initial, overwhelming brightness — called the “prompt” phase by scientists. It’s propelled by something called synchrotron radiation, “which results when electrons are accelerated in a curved or spiral pathway,” according to the press release.

While exciting, these observations are just a first step. With quick thinking and fast reactions, scientists were able to observe this entire gamma-ray burst from beginning to end. Time will tell whether they are able to replicate the process in the future to learn even more about these mysterious explosions. After all, it’s important that we learn about them because they have the potential to have destructive and deadly effects on life as we know it.