This Telescope Could Snap The First Photo of a Black Hole, Put Einstein’s Theory of Relativity To Test 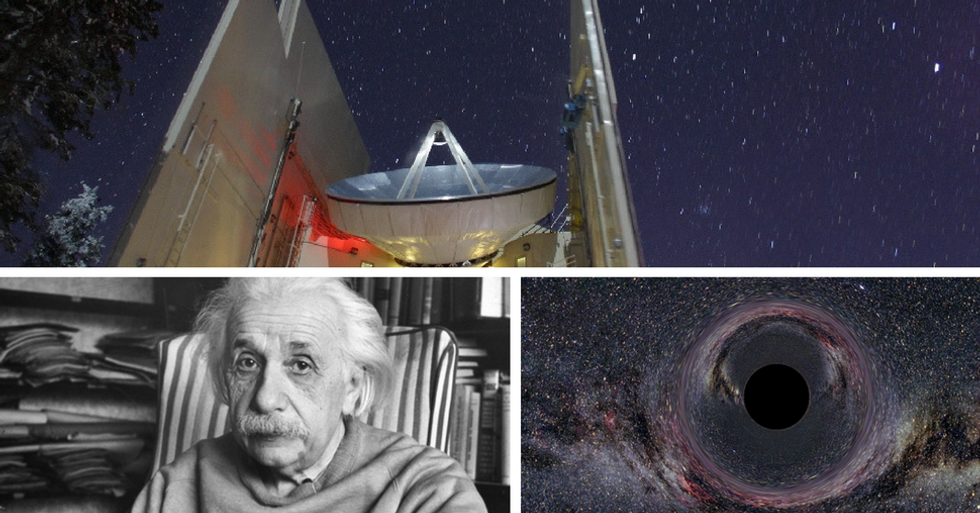 In April, scientists hope to obtain the first photograph of a black hole using a series of radio-wave telescopes, known as the Event Horizon Telescope. Researchers will gather huge amounts of data that will either confirm or call into question the size and nature of black holes, as predicted by Einstein’s theory of relativity.

Black holes, themselves, are too dark to be photographed. Previously, the otherwise unexplained orbit of certain stars around an invisible object at the center of the Milky Way Galaxy provided the primary evidence of the existence of the black hole known as Sagittarius A*. The Event Horizon Telescope will focus on this black hole, which has an event horizon diameter—or point of no return—of approximately 12.4 million miles.

This new telescope will attempt to capture images of the event horizon, a glowing ring of gas and dust that swirls with increasing speed as it’s ripped apart prior to entering the hole; the dark blob in the center will be the shadow cast on the vortex of the black hole where the debris is sucked in. The telescopes will capture over 10,000 laptops worth of data, which will be flown back on airplanes to MIT Haystack Observatory in Massachusetts before it’s compiled and analyzed. It could be the start of 2018 before scientists complete their work and release the images of the black hole.

A simulation of what Einstein's theories predict the holes should look like. (Credit: Source.)

Sagittarius A* is four million miles more massive than our sun, yet it appears the size of a pinprick on our sky because it’s 26,000 light years away, compared to the average distance of 150 million kilometers from which we orbit the sun. Thus, we would need a regular telescope the size of Earth to view Sagittarius A*, which is impractical.

Instead, the Event Horizon Telescope uses very-long-baseline interferometry (VLBI), which measures radio waves from a single object at an appointed time with a series of specialized telescopes spread across the globe. These radio receivers will view the black hole using a carefully chosen wavelength of 1.3mm (230GHz)to create the best opportunity of seeing through particles of dust in the area of the black hole; still, the success of the data recovery will depend largely on the weather, as moisture in the Earth’s atmosphere will also hamper the telescopes’ visibility.

The telescopes’ combined resolution should be 50 microarcseconds, which scientists say will provide them with the ability to see an object approximately the size of a grapefruit on the moon. With this precise technology, scientists are hoping to test their understanding of Einstein’s theory of relativity on a massive scale.

Having specifically predicted the size of Sagittarius A* using the theory of general relativity, which describes how mass warps space and time to create gravity, scientists now effectively plan to test Einstein’s relativity theory by observing the black hole with the Event Horizon Telescope.

Professor Feryal Ozel, a member of the Event Horizon Telescope team from the University of Arizona says, "We know exactly what general relativity predicts for that size." He adds,"Get to the edge of a black hole, and the general relativity tests you can perform are qualitatively and quantitatively different."

In addition, according to relativity theory, the Doppler effect will cause the part of the black hole moving toward Earth to appear much brighter, creating a crescent-shaped light around the black hole.

"Hopefully it will look like a crescent - it won't look like a ring," Ozel says. "The rest of the ring will also emit, but what you will brightly pick up is a crescent."

Some scientists are somewhat skeptical about all aspects of Einstein’s relativity theory holding up if they are able to retrieve significant data about the black hole.

While a black hole’s large mass requires the theory of relativity to explain, its relatively small size by comparison to its mass also calls upon principles of quantum mechanics—which state that very small particles exist in a state of probability, with respect to their size and location. The theories of relativity and quantum mechanics have never been reconciled, and when combined and applied to black holes, the equations fail and indicate that black holes have an infinite density.

Scientists have already obtained some preliminary data from the Event Horizon Telescope, and used it to test the theory of space-time relativity. Avery Broderick of Canada's University of Waterloo and the Perimeter Institute for Theoretical Physics says, "Even with existing data today we can say something interesting about the higher-order structure of astrophysical black holes." He adds, "We will in principle be able to distinguish deviations from general relativity.

"General relativity is safe for right now, but it's not going to be safe for much longer."

Project leader Sheperd Doeleman told BBC news, "There's great excitement." Doelman, from the Harvard-Smithsonian Center for Astrophysics, says, "We've been fashioning our virtual telescope for almost two decades now, and in April we're going to make the observations that we think have the first real chance of bringing a black hole's event horizon into focus."

He adds, "As I've said before, it's never a good idea to bet against Einstein, but if we did see something that was very different from what we expect we would have to reassess the theory of gravity.

"I don't expect that is going to happen, but anything could happen and that's the beauty of it."