The Ancient Origin of Winemaking Is Not What We Thought 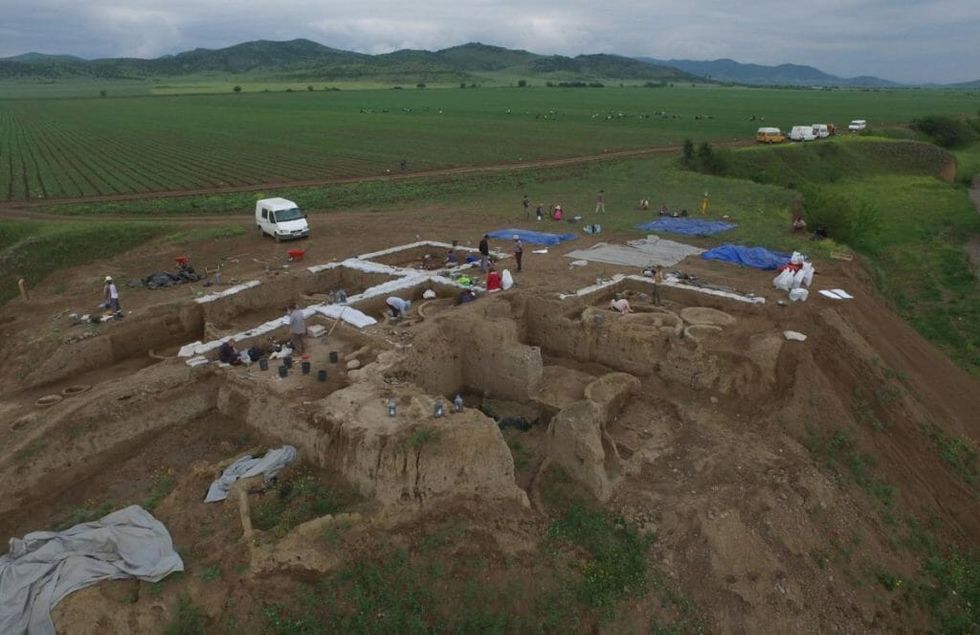 Humankind’s love affair with wine has been documented over millennia, though the beverage still has secrets to reveal.

Until recently, experts believed wine originated in Northern Iran about 7,000 years ago, but on November 13, an international team of archaeologists released a study that tells a very different tale. The results, published in the Proceedings of the National Academy of Sciences, push the origin story back about 1,000 years and place it in a rural region of Eurasian nation Georgia, about 20 miles south of capital city Tbilisi. This discovery suggests that local farmers were making wine around 6,000 B.C., at a time when humans were still dependent on bone and stone tools.

Archaeologists and botanists who examined the Neolithic Georgian village of Gadachrili Gora found multiple clues that mark this region as the birthplace of wine. While excavating the site, researchers discovered large, round pottery jars lodged in the floors of several homes; the jars, big enough to hold about 300 wine bottles, featured intricate designs of grapevines and were likely buried underground to allow for fermentation, a common Georgian practice to this day.

Chemical analysis of pottery shards taken from the excavation, as well as from nearby site Shulaveri Gora, turned up four telltale chemicals indicating wine residue: tartaric, malic, succinic and citric acids. University of Pennsylvania archaeologist Patrick McGovern, who analyzed the samples, noted that this combination of acids has only been found in grape wine. In addition, using radiocarbon dating, experts pinpointed the pottery’s origins somewhere between 5,800-6,000 B.C. Botanists who studied pollen at the site believe that the nearby forested hillsides were likely once filled with grapevines; they also discovered traces of Vitis vinifera grape pollen, wine starch and ancient fruit flies on the shard samples.

According to University of Toronto archaeologist Stephen Batiuk, who co-directed the recent excavation: "The Eurasian grapevine that now accounts for 99.9 percent of wine made in the world today has its roots in Caucasia." Adds McGovern: “When we pick up a glass of wine and put it to our lips and taste it we are recapitulating that history that goes back at least 8,000 years.” Archaeologists hope to identify the closest modern match for these prehistoric grapes and plant an experimental vineyard near the Neolithic village to re-enact the original winemaking process.

Despite the findings, China retains its claim to the birthplace of the world’s oldest fermented beverage, a cocktail of rice, honey, hawthorn fruit and grapes dating back to 7,000 B.C. Nevertheless, the news sheds light on just how little we know of the complexities of Neolithic culture. For Stanford University archaeologist Patrick Hunt, the findings indicate that Stone Age people were more than simple farmers seeking means to survive: “Wine fermentation isn’t a survival necessity. It shows that human beings back then were about more than utilitarian activity. There’s far greater sophistication even in the transitional Neolithic than we had any clue about.”

Turning grapes into wine would not have been easy, involving complex processes of cultivation, fermentation and storage. McGovern highlights the resourcefulness farmers would have needed to create wine just a few thousand years after the first domestication of grasses: “They’re working out horticultural methods, how you transplant it, how you produce it. It shows just how inventive the human species is.”

For his part, McGovern remains convinced that there’s more to learn about winemaking’s storied past. "Wild grapes would have been growing in Lebanon, Northern Israel, Palestine—that's where you have wild grapes growing today and presumably since the last ice age, “ he says. Perhaps further excavations in the region will reveal still more ancient roots to an age-old fascination: the pursuit of pleasure through those fermented grapes.