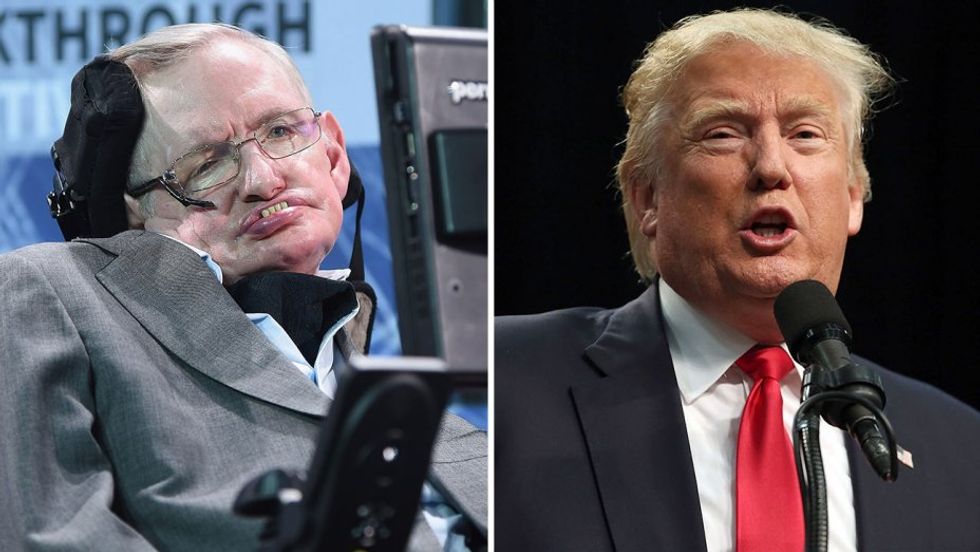 Stephen Hawking doesn’t think much of President Trump or his climate policies. On his 75th birthday, the renowned physicist and cosmologist gave an interview exclusively toBBC News, and he had some pretty dire predictions.

“We are close to the tipping point where global warming becomes irreversible,” Hawking said in his interview. “Trump's action could push the Earth over the brink, to become like Venus, with a temperature of 250 degrees, and raining sulphuric acid.”

Venus is covered in a thick cloud layer. Underneath that cover is arunaway greenhouse effect, caused by the carbon dioxide once emitted by its now-dormant volcanoes. The Earth was spared from this fate as a young planet because of our vast oceans; water absorbs carbon dioxide. While Venus did once likely have liquid water, the quantity was too small to grab all the carbon dioxide, so it remained in the atmosphere.

This cumulative effect has led to a nightmare world, with surface temperatures as high as 864 degrees F. Venus’s atmosphere is almost100 times thicker than our own. The surface pressure is so great that it would crush a human standing on its surface. Venus may once have had the temperate climate of Earth, but naturally occurring carbon dioxide emissions have completely ruined the planet.

While Hawking’s predictions are a bit dramatic, if our current climate-polluting behavior is left unchecked, the consequences could be dire. "Climate change is one of the great dangers we face, and it's one we can prevent if we act now,”continues Hawking. “By denying the evidence for climate change, and pulling out of the Paris Climate Agreement, Donald Trump will cause avoidable environmental damage to our beautiful planet, endangering the natural world, for us and our children."

Last month, Trump announced that the United States would be withdrawing from the Paris climate accord.In his Rose Garden speech, he claimed that “the draconian financial and economic burdens the agreement imposes on our country” included fewer jobs, lower wages, and diminished economic production. It was in this speech that the president used the now-famous line “I was elected to represent the citizens of Pittsburgh, not Paris.” Following this statement, Pittsburgh mayor Bill Pedutoissued an executive order stating that, despite the president’s leadership, the city would continue to pursue goals of carbon reduction.

The Paris climate accords were an attempt to unite countries and leaders around the world against climate change.The treaty is nonbinding; rather than imposing “draconian” standards on the United States, it’s designed to encourage voluntary actions to reduce carbon emissions. The accords have 195 signatories. The United States is the second-largest polluter in the world,behind China, so President Trump’s remarks dealt a large blow to the goal of tackling rising temperatures due to human-caused climate change.