Stephen Hawking is Going into Space 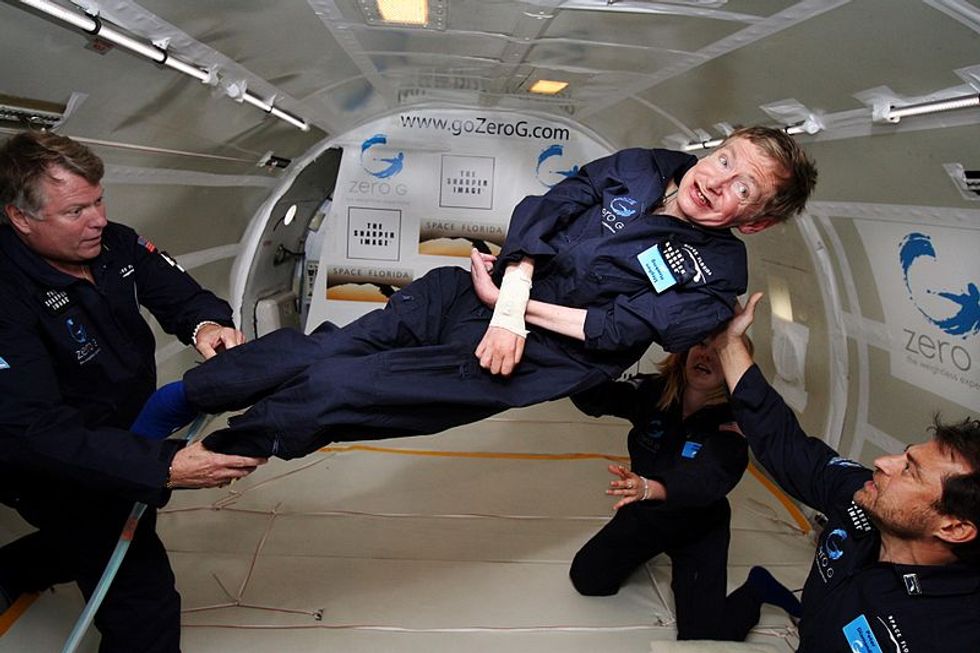 In an interview with ITV’s Good Morning Britain, renowned theoretical physicist Stephen Hawking revealed that he would be heading into space with commercial spaceline Virgin Galactic.

“I have already completed a zero-gravity flight which allowed me to float, weightless,” Hawking said. “But my ultimate ambition is to fly into space. I thought no one would take me, but Richard Branson has offered me a seat on Virgin Galactic and I said ‘yes’ immediately.”

Sir Richard Branson, Virgin Galactic's founder, expressed a wish to send Hawking to the stars as recently as 2015.

"Professor Stephen Hawking is one of the people I admire most in the world, an undisputed genius who has opened our eyes to the wonders of the universe, while also happening to be a kind and delightful man,” Branson said in a statement at the time. “He is the only person I have given a free ticket with Virgin Galactic, and he is signed up to fly as a Future Astronaut with us if his health permits it."

Hawking speaks about his plans to go to space. (Credit: Source.)

A trip into space would likely be some years into the future and would not be without complications for the 75-year-old cosmologist. Professor Hawking’s health is of significant concern as he has lived with amyotrophic lateral sclerosis (ALS) since the age of 21. The motor neuron disease kickstarts a degenerative process which affects the nerves in the brain and spinal cord, particularly the nerves that govern muscle movement.  Otherwise known as Lou Gehrig’s disease, the disease is named for the 1939 Hall of Fame baseball player who forged a public battle with ALS, ultimately succumbing to it at age 37.

The launch, scientists hope, should yield vital information on the effect of gravity on motor neurons. The g-force, or acceleration due to gravity at the Earth's surface, is 1 g; our mobility and organ function has adapted to the conditions here. As space flight becomes more accessible, humans will be exposed to different kinds of gravity conditions. Gravity biologists are already investigating how "altering gravity can have profound effects on the body, particularly the development of muscles, but the reasons and biology behind gravity's effect are not fully known."

In a PeerJ study of nematode worms, a gravity biologist demonstrated that increasing gravity contributed to more nerve defects in muscles and that altering gravity impacts motor neuron development. It remains to be seen whether the zero gravity of space travel will improve the function of motor neurons.

NASA has also been studying the effects of gravity on the nervous system. The prolonged weightlessness seen in space travel contributes to a loss of muscle strength, muscle volume, and bone density, particularly in the legs. These conditions can cause reduced spinal cord excitability, adversely affecting a human’s walking ability.

Because of this, astronauts commit to a rigorous exercise regimen to counter the loss of muscle and bone caused by spaceflight. Spinal cord function significantly decreases after five days of space travel, lasting for the duration of the flight and up to 10 days after landing even with exercise. Prolonged bed rest on earth did not have the same effect, said NASA, suggesting nervous system changes in space may be responsible.

Considered among the smartest men on the planet, Hawking also took a moment to wax philosophical, telling Good Morning Britain he doesn't claim to know the meaning of life. "I have no idea. I do remember when I was happiest. It was 1967, and the birth of my first child, Robert. My three children have brought me great joy."

Could space travel be the next joyful milestone?

Hawking, an outspoken believer in climate change and science education, also shared his thoughts on the rise of President Donald Trump, telling  Good Morning Britain that he "fears he may not be welcome" in the United States. He suggested Trump should fire Environmental Protection Agency head Scott Pruitt, saying, "Climate change is one of the great dangers we face, and it’s one we can prevent."