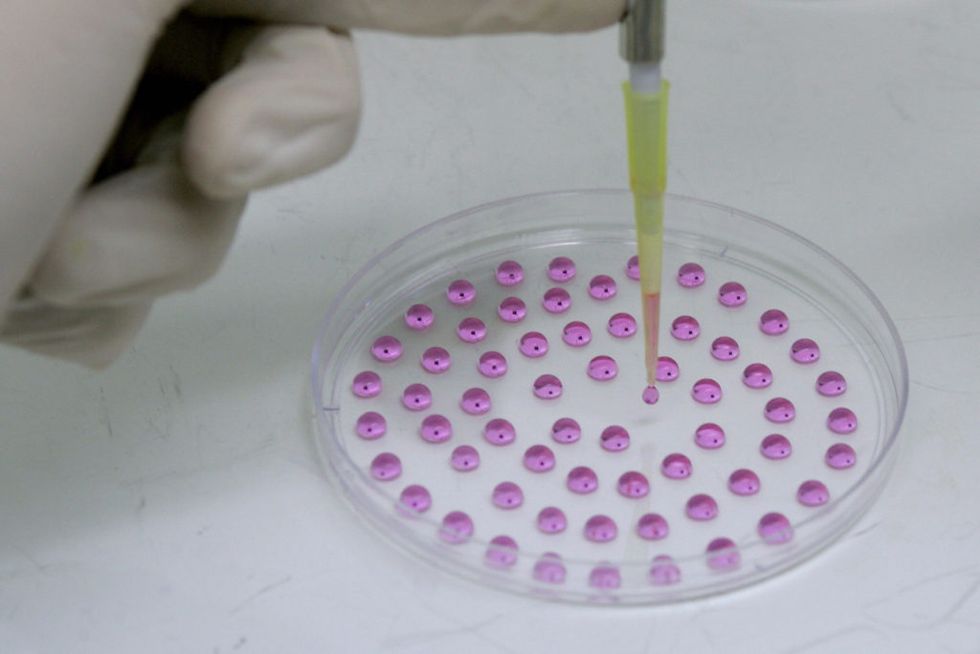 A scientific researcher manipulates drops of embryonic stem cells in a laboratory, at 'Hospital do Coracao' heart institute, in Sao Paulo, Brazil, on 5 March, 2008. Brazil's Federal Supreme Court will decide today on the continuity of the stem cells research, after Roman Catholich church officials and anti-abortion groups urged to ban it, given that the stem cells extraction entails the destruction of the embryo. AFP PHOTO/Mauricio LIMA (Photo credit should read MAURICIO LIMA/AFP/Getty Images)

Sorry, Star Trek fans, looks like Geordi LaForge’s VISOR (Visual Instrument and Sight Organ Replacement) will remain the stuff of science fiction. A team of medical doctors in the United Kingdom have figured out another way to restore sight by using embryonic stem cells.

On Star Trek: The Next Generation, Geordi’s congenital blindness was partially returned through technological wizardry in the form of a metallic band across his eyes. The band delivered “enhanced vision” to his brain in the form of a bandwidth of light frequencies including visible, infrared, and ultraviolet. Many times during the course of the show, the ship’s chief surgeon, Dr. Beverly Crusher, suggested ways of giving Geordi normal human vision via futuristic bio-medical discoveries.

Does this mean that blindness will soon be a thing of the past? Possibly.

Age-related macular degeneration (or AMD) is the fourth most common form of blindness in the world, where an important group of cells in the retina of the eye are lost over time. There are two different types of AMD called “dry” and “wet,” with wet AMD being much less common.

The “wet” form gets its name from the abnormal growth and accumulation of blood vessels in the retina that eventually leads to blood leakage and irreversible damage to the retinal cells in the area. The two elderly individuals that successfully responded to the stem cell therapy in this study were afflicted with the “wet” form of AMD with a high degree of severity.

Here, the restoration of sight was accomplished through the use of embryonic stem cells. The promise of stem cell therapy has been circulating in popular media for several decades, and now it seems that the potential of this therapeutic approach is finally coming to fruition.

Embryonic stem cells are essentially “blank cells” with no specialized function, but when given specific “cues” will change into certain cell types; for example, nerve cells, heart cells, muscle cells, or fat cells to name a few. Thus, the strategy emerged to coax a population of stem cells to adopt the properties of the retinal cells absent after AMD.

Therapies based on embryonic stem cells have been engulfed in controversy for many years due to the politics of abortion, since the cells are collected from fetal tissue. Moreover, the genetic modification of stem cells for targeted therapies has also become embroiled in debates over human cloning. The majority of stem cells intended for medical use are harvested from an individual’s bone marrow.

Indeed, bone marrow transplants are often employed to replenish cancer patients’ supply of healthy cells after the toxic effects of chemotherapy and are the most commonly used kind of stem cell therapy for more than three decades. Scientists and physicians have reported the significant potential for stem cell treatments to ameliorate multiple conditions, including but not limited to: wound healing, neurodegenerative diseases, heart disease, spinal cord injuries, brain damage, and as shown here, reversing blindness.

The doctors involved in this experimental treatment were not the first to explore embryonic stem cells in treating AMD. Prior attempts involved the transplantation of suspensions of stem cells into the retina in the hopes of reversing the cumulative effects of AMD. According to this report, the results of those prior experiments were ambiguous at best.

The scientists that participated in this study believe that the prior suspension technique did not allow for all of the stem cells to transform into retina cells with the normal architecture and configuration, which might explain why the approach employed here had greater benefit.

What distinguishes this study was the use of a membrane to create a “patch” of stem cells that were surgically implanted into one of each patient’s eyes. The stem cells were seeded onto the synthetic membrane, allowing them to form a fully differentiated monolayer of cells that resemble the typical landscape of specialized retina cells.

Approval to perform this type of surgery on human patients was predicated on several successful research studies involving the implantation of these stem cell seeded patches into the eyes of mice and pigs. Beneficial changes in vision and the relative safety of the implanted stem cell “patches” were monitored over the course of a year.

Improvements in the vision of the two patients reported in this study were determined by “best-corrected visual acuity” (or BCVA), where the ability of the patients to read off letters on a Snellen chart (chart seen in most doctors’ offices with letters of gradually decreasing size) with and without glasses was tested over the 12 months post surgery.

The two patients went from seeing 10 to 39 and 8 to 29 letters, respectively. Scientists also evaluated the reading speed of the patients, by asking them to read sentences from a certain distance, and the sentences were printed in different font sizes. Twelve months after the stem cell therapy, the reading speeds for the two patients improved from roughly 2 to 83 and 0 to 48 words per minute.

This breakthrough in reversing a type of blindness is coincident with the recent first-of-its-type approval by the United States Food and Drug Administration (FDA) of a gene therapy technique to restore sight to individuals born with a unique form of blindness. This type of blindness, called Leber’s congenital amaurosis (or LCA), is caused by a defective gene called “Retinal Pigment Epithelium-Specific 65 KiloDalton Protein” (or RPE65).

The newly licensed gene therapy to restore sight in persons born with LCA is called “Luxturna,” which involves the introduction of a specially modified virus possessing the normal form of the RPE65 gene. This therapeutic approach has been reported to be effective in more than 90% of patients. This gene therapy method and the previously described stem cell therapy represent significant milestones in modern medical science.

The outcome of this experimental surgery using a stem cell “patch” to restore sight in two elderly people suffering “wet” AMD partially paves the way for future efforts to correct visual impairments. A considerable amount of research will need to be conducted to determine how widely this therapeutic method could be applied. However, it provides hope that some of the deteriorative effects of aging can be reversed. In the end, it looks like Dr. Crusher might have just beaten Geordi to the punch.