Hawking’s “Starshot”: Could We Reach the Nearest Star Within Our Lifetime? 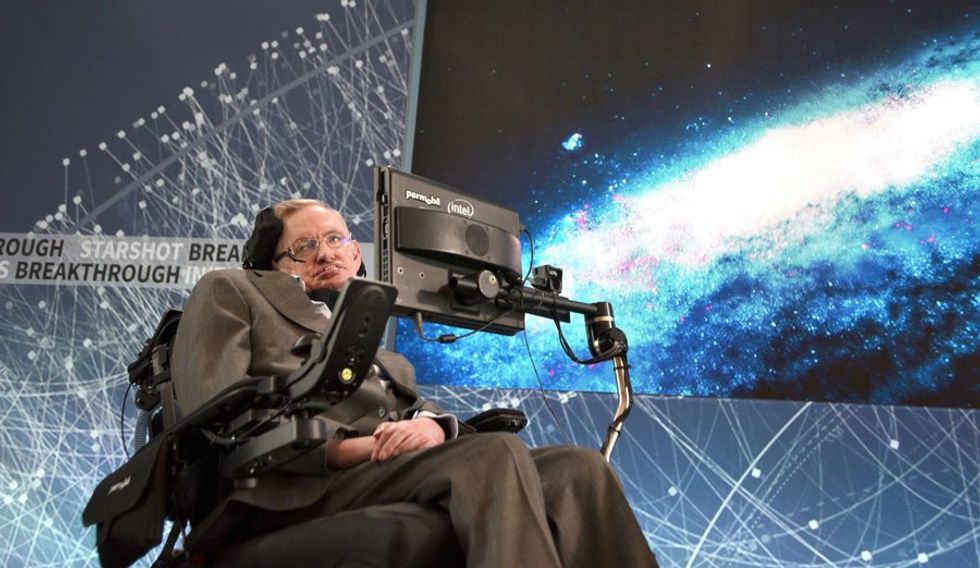 On April 12th, astrophysicist Stephen Hawking, Russian tech billionaire Yuri Milner, and a panel of other scientists and leaders in the tech community announced a joint venture called Breakthrough Starshot. The goal of this initiative, the second scientific endeavor to which Milner has donated $100 million (the first being Breakthrough Listen, an anticipated decade-long search for extraterrestrial intelligence which began last January), is to send a fleet of tiny light sails to Alpha Centauri, our closest star system.

In a 2008 talk, Hawking said that “Spreading out into space… will completely change the future of the human race, and maybe determine whether we have any future at all.” Since then, the Kepler space observatory was launched to seek planets around other stars (there are over 3200 confirmed exoplanets so far), the Curiosity rover wandered Mars, the Voyager 1 probe entered interstellar space, and the New Horizons mission flew past Pluto. Human influence has indeed continued to spread through space, but we have yet to reach the nearest star.

“I believe that what makes [humans] unique is transcending our limits,” Hawking said as he introduced the Starshot project. “How do we transcend these limits? With our minds and our machines. The limit that confronts us now is the great void between us and the stars. But now we can transcend it. With light beams, light sails, and the lightest spacecraft ever built, we can launch a mission to Alpha Centauri within a generation.” The technology that Hawking talked about is not yet developed - hence the $100 million investment from Milner’s Breakthrough Foundation.

However, the idea of a spacecraft propelled by light has been around for decades: in a 1608 letter to his fellow astronomer Galileo Galilei, Johann Kepler wrote that humans might someday be able to harness sunlight to fuel space travel. “Provide ships or sails adapted to the heavenly breezes, and there will be some who will brave even that void,” he wrote, but the nature of light was not yet understood, so the idea stagnated until the 19th century. In 1865, when James Clerk Maxwell discovered that light was made up of particles called

photons, which carried energy, the romantic idea of a space sail propelled by light returned. NASA scientists began officially researching solar sails and building prototypes in the 1960s, and while it seems clear to astronomers and engineers that light sails will work, none has been successfully launched to date.

Light sails work because light carries energy: as photons reflect off the shiny sails, they impart momentum to the lightweight material. The sails use that momentum to propel them, like kites on a breeze, through outer space. Traditional light sails, like the one that the Planetary Society and Bill Nye crowdfunded and which will launch this year, use sunlight. The sails are large and thin, measuring about 344 square feet but with a thickness of only 1/5000 of an inch, so that they have the highest surface area possible to catch the photon “breeze” without being too heavy to be propelled by it. The sails will accelerate slowly but consistently, reaching a speed of over 340 miles per hour after one month and about 5300 miles per hour after 16 months. This may seem like an effective method, but at that rate, it would take the solar sail almost 1200 years to reach Alpha Centauri.

The Starshot project will rely on two major changes to get to the nearest star system much faster than that, arriving only 20 years after launch. The first major change is to shrink the spacecraft: instead of one big light sail, the Starshot project plans to use a flock of light sails only a few hundred atoms thick (edge-on, the human eye wouldn’t be able to see them). Instead of carrying a ten-pound load of scientific instruments, each sail will carry all of its instruments in the form of a “StarChip” weighing only a few grams. The second change is, with true theatrical flair, lasers. Because lasers emit a much more concentrated beam of light, a light sail propelled by a laser experiences an intense barrage of targeted photons. It’s like a hailstorm is propelling them instead of a gentle breeze. Within two minutes, the StarChips would be blasted 600,000 miles away from home.

The target for this new venture, the Alpha Centauri star system, consists of three stars: Alpha Centauri A, Alpha Centauri B, and Alpha Centauri C (also called “Proxima Centauri,” so named because it’s very nearby). Because there are three stars to orbit, the area in which a planet could be friendly to life is about twice as large as the habitable zone around our

own Sun. The Alpha Centauri system’s proximity to Earth and its large habitable zone make it particularly tempting for the first interstellar mission. One potential wrench in the gears of Starshot’s plan, though, is that astronomers do not know for sure whether or not there are any planets in the system.

That wrench is not alone: in fact, Starshot tends to seem more like a few gears in a box of wrenches. Breakthrough Initiatives’ “Challenges” page for the Starshot project lists 25 potential problems, from creating the technology required to make StarChips appropriately tiny to making sure the light sails don’t collide with anything to getting any data back down to Earth.

Conceptually, the Starshot project relies heavily on Moore’s Law, which states that computer processing power will double every two years. For Starshot, the most important consequence of that would be the ability to create smaller but still high-powered computers, sensors, and cameras so that the StarChips will be as light as possible. If Moore’s Law holds, this could happen in the next decade, along with similar advances in the nanotechnology required to build the incredibly thin sails and the lasers needed to propel them (which would have to generate about 100 times as much energy as a nuclear power plant). That’s a big “if: many experts believe that Moore’s Law no longer applies, so the advances necessary for Starshot’s success could take decades or longer.

Assuming that the technology does arise to create and launch the Starshot light sails, there’s another problem: what exactly will happen once they get to Alpha Centauri. By then, if they arrive intact, the spacecraft will be whizzing by so quickly - over 134 million miles per hour, with no way to slow down - that it’s hard to imagine them gathering much information. Any data is good data, though, which leads to the next two major problems: pointing sensors somewhere useful, and sending that valuable information back to Earth. The first is a two-fold problem: first, the sensor would have to be able to locate a planet in the Alpha Centauri system (which, again, may or may not even exist), and then it would need to take data while moving at 0.2 times the speed of light. Taking a stable photograph from a moving train is

tricky; now imagine taking that photo at a rate almost 2 million times faster.  The StarChip, while moving almost 80 thousand times faster than a bullet, would need to find Earth in the sky, point itself toward Earth (perhaps using photon thrusters, which do not yet exist), and send the data back to Earth using a small laser.

When you add up all of the potential issues with the Breakthrough Starshot project, it seems pretty implausible. Milner, Hawking, and the project’s other proponents see it differently, though. “The message that Stephen Hawking and I want to send is that for the first time ever, this is an achievable goal,” Milner told the Washington Post. “We can stand up and talk about it. Fifteen years ago, it wouldn't have made sense to make this investment. Now we've looked at the numbers, and it does.”

Right now, the project is focused on research and development: Milner has promised to fund a revolving door of the best and brightest minds in science and technology to work on solving the many problems that stand in Starshot’s way. If that’s not enough, each of the challenges listed on the Breakthrough Initiative’s site has a comment section, so any expert or layperson can contribute their ideas. All in all, if Starshot’s fleet of light sails does eventually launch, it’s likely to cost between $5 to $10 billion. Milner’s initial $100 million investment will only cover the very beginnings of work on the necessary technologies, although he has stated that he hopes his investment will lure other investors from around the world.

If the Starshot project does end in success, it will be thrilling for anyone with an interest in space and the Universe around us. Tiny robots surfing through space on the light of a laser! Our first close-up images of another star system! The search for life on the closest of the exoplanets! There’s nothing not to love. Even if that doesn’t happen, though - even if one of the roadblocks for Starshot proves insurmountable - the scientific inquiry, technological research, and new ideas that it will promote will themselves be rewarding. As Carl Sagan, a major proponent of solar sails in his day, wrote in his book Cosmos, “Imagination will often carry us to worlds that never were. But without it we go nowhere.”

There may or may not be new worlds at Alpha Centauri, and Starshot may or may not take us there. It’s too early to count it out, though, and even the beginning of this new venture has captured the imaginations of scientists and space lovers around the world.