Two geophysicists found a correlation between a slowing in the Earth’s rotation and an uptick in major earthquakes. Since the Earth has been slowing for the past few years, we might see more big tremors in 2018. 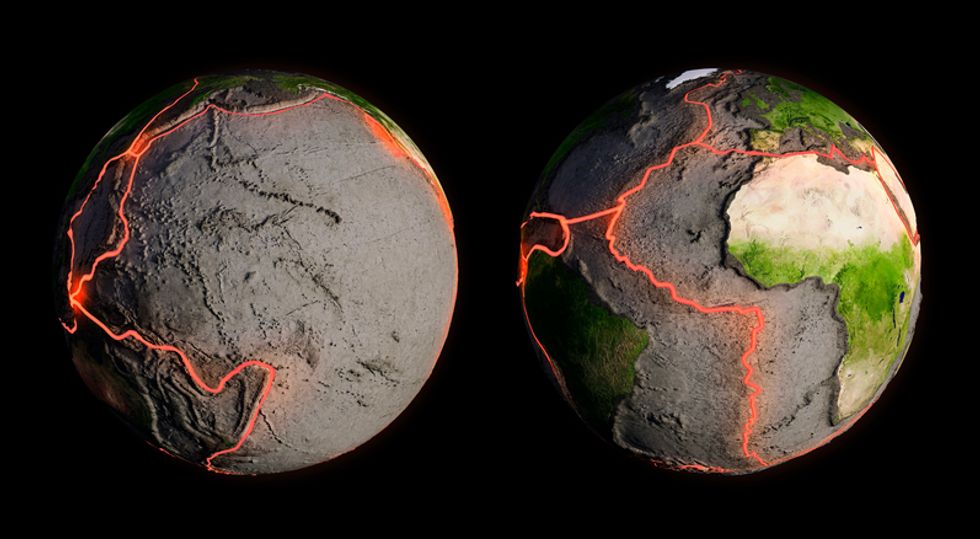 On November 30, thousands of people on the East Coast got a surprising afternoon jolt when a 4.1 earthquake struck Dover, Delaware. People reported feeling the quake as far north as Connecticut and as far south as Virginia. It was a rare occurrence on that side of the U.S., and it sent the hashtag #earthquake trending for a few hours. But if a couple of geophysicists in Colorado and Montana are correct, we might be talking about #earthquakes a lot more in 2018.

Roger Bilham of the University of Colorado and Rebecca Bendick of the University of Montana published a study in Geophysical Research Letters in August suggesting that the periodic slowing of the Earth’s rotation coincides with an increase in larger earthquakes. They already knew there was an uptick in earthquakes approximately every 32 years, and in searching for what might cause these cyclical clusters, they found just one major correlation: the Earth’s slowing rotation during the five preceding years. According to atomic clocks, the Earth’s rotation has been slowing in tiny increments — fractions of a millisecond — for more than four years. This means we might be due for an earthquake cluster next year.

The Earth’s periodic slowing is typically imperceptible, but Bilham says it could be seen as a “five-year heads-up on future earthquakes.” And, unfortunately, the earthquakes he predicts for next year may be a lot stronger and more devastating than the one that recently rattled East Coasters.

The cyclical cluster usually includes a bump in earthquakes that measure more than 7.0 on the moment magnitude scale. A regular year sees about 15 to 20 earthquakes of that size or larger. Next year, the researchers say, Earth could see 25 to 30 such quakes. And those could be less like the tremblor the East Coast felt last week and more like the devastating 7.3 magnitude quake that killed 300 Iranians earlier in November.

So, what’s actually happening beneath the ground?

An earthquake happens when energy stored along cracks in the Earth’s crust — faults — is released. That creates seismic vibrations that shake the ground. Since we know where many faults are, scientists can predict generally where earthquakes might occur. When it comes to the connection with the Earth’s rotation, however, things get a bit more complicated.

Some suggest thinking about it like a spinning skirt: when the rotation speeds up, mass moves closer to the equator, and when it slows down, mass moves back out toward the North and South Poles. The idea is that if this slowing happens after a significant amount of potential energy has already built up along fault lines, or, as Bendick says, “if they’re locked and loaded,” the tiny change in the Earth’s rotation could kick earthquakes into gear.

It’s important to remember that this isn’t a foolproof prediction. It’s notoriously difficult to predict earthquakes, and this most recent hypothesis hasn’t been tested in a lab. Bilham himself said, “Of course [it] seems sort of crazy.”

But even some skeptics are willing to sign on to this prediction.

“It might be nonsense,” said geophysicist Michael Manga of the University of California, Berkeley. “I’ve worked on earthquakes triggered by seasonal variation, melting snow. His correlation is much better than what I’m used to seeing.”