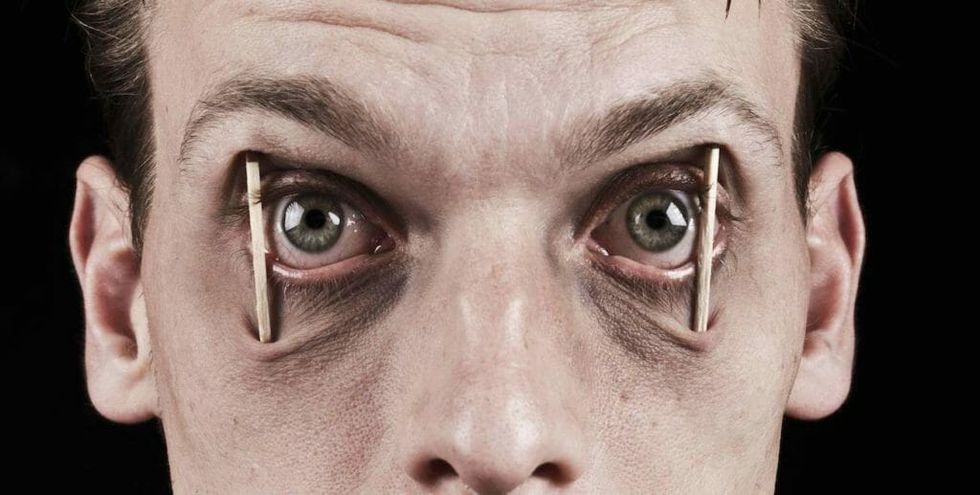 Scientists have finally confirmed what generations of college students and new parents have long suspected: sleep deprivation actually causes your brain to eat itself.

The discovery, published in the Journal of Neuroscience in late May, also sheds light on why lack of sleep is correlated with a higher rate of brain disorders such as Alzheimer’s and dementia.

A team from Marche Polytechnic University in Italy started out with four groups of mice — one allowed to sleep for six to eight hours, one kept awake awake for eight additional hours, one periodically woken up, and another kept awake for five straight days. The team then examined the mice’s brains using block-face scanning software. The mice kept awake for five straight days showed markedly increased activity in astrocytes, macroglial cells that perform something of a housekeeping function for the brain by pruning unnecessary synapses.

In fact, the Marche Polytechnic team found that the mice kept awake for five days showed almost twice the astrocyte activity as the mice who were allowed eight hours of sleep.

“We show for the first time that portions of synapses are literally eaten by astrocytes because of sleep loss,” said Marche Polytechnic neuroscientist Michele Bellesi.

While the heightened astrocyte activity isn’t itself particularly concerning, especially given that much of it was centered on larger, more mature synapses — “They are like old pieces of furniture, and so probably need more attention and cleaning,” said Bellesi — it’s often correlated with active microglial cells, a condition commonly found in a range of brain disorders such as Alzheimer’s, Parkinson’s and ALS.

According to the Journal of Neuroscience report, “only chronic sleep loss activates microglia and promotes their phagocytic [Greek for “eat” or “devour”] activity…suggesting that

extended sleep disruption may prime microglia and perhaps predispose the brain to other forms of insult."

“We already know that sustained microglial activation has been observed in Alzheimer’s and other forms of neurodegeneration,”saidBellesi.

Evidence suggesting a link between poor sleep quality and increased risk of Alzheimer’s has beengrowinglately. Last year Jeffrey Iliff, a brain scientist at Oregon Health & Science University,told NPRthat "changes in sleep habits may actually be setting the stage" for dementia, and a 2009 study at Washington University in St. Louis, Mo.,showedthat amyloid plaques associated with Alzheimer’s develop more quickly in the brains of sleep-deprived mice, potentially due to increased inflammation.

“The link between chronic sleep loss and Alzheimer’s disease is intriguing, and accumulating evidence seems to suggest that the two things are related, even if we don’t know yet how,”saidBellesi. “Future studies are needed to verify whether sleep loss can truly represent a risk factor for dementia.”

In the meantime, however, it may not be a bad idea to prioritize that extra shut-eye, whether by going to bed a few hours earlier, or inducing more restful sleep through exercise or improved sleep hygiene. See cdc.gov/sleep for tips.