The New Shingles Vaccine Is Almost Here & It's Incredibly Effective 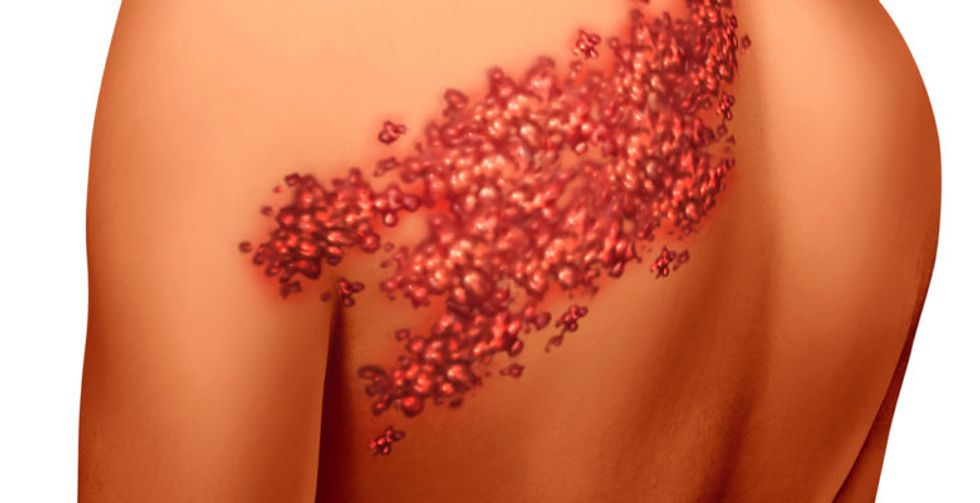 Shingles disease viral infection concept as a medical illustration with skin blisters hives and sores on a human back torso as a health symbol for a painful rash condition.

Getting shingles is not pleasant.

First, a burning pain breaks out across parts of the body — most often the trunk and waist. Then, the painful areas erupt in fluid-filled blisters, sometimes accompanied by fatigue or fever.

Most common in adults over age 50, shingles is both contagious and can be followed by postherpetic neuralgia: a debilitating, long-term nerve pain. The most common vaccine, Zostavax, is only marginally effective, protecting about half of adults over 60.

That changed in October, when an advisory committee to the Centers for Disease Control and Prevention approved a brand-new vaccine with a more than 90 percent efficacy rate.

Shingrix, made by GlaxoSmithKline, is expected to be available as early as the end of November for $213, although insurance companies will probably not yet cover it.

“This vaccine has spectacular initial protection rates in every age group. The immune system of a 70- or 80-year-old responds as if the person were only 25 or 30,” Dr. William Schaffner, preventive disease specialist at the Vanderbilt University School of Medicine, told The New York Times.

Unlike the old vaccine, Zostavax, Shingrix contains an adjuvant, which increases the immune system’s response, as well as an inactive virus. Many people with allergies were unable to receive Zostavax as it contains a live virus. The CDC panel recommends that anyone previously vaccinated with Zostavax receive the two doses of Shingrix.

Shingles comes from the varicella-zoster virus — the same one that causes childhood chickenpox. Because of this, almost all adults over 40 years old harbor varicella-zoster. After the virus manifests as chickenpox, it then permanently lodges itself in nerve tissue near the spinal cord. In some people it remains dormant forever, but in others it can cause multiple outbreaks of shingles in late middle age. Why varicella-zoster reactivates as shingles in some people and not others isn’t known, but theories point to genetics or a possible environmental trigger.

Chickenpox was once so common in the U.S. it was practically a rite of passage — in fact, many children of the 1970s and ’80s may remember parents arranging “pox parties,” where children got together in a group and were deliberately exposed to someone with the virus. The thinking went that by ensuring a child contracted chickenpox at a young age, they could avoid catching it as an adult, when symptoms are typically more severe.

However, contrary to popular belief, chickenpox was not a benign illness — it sometimes resulted in serious complications or even death. Before the introduction of the chickenpox vaccine in 1995, 100 children died from the virus each year, with many more going on to contract pneumonia and infections from bacteria that entered scratched blisters. Chickenpox is now considered rare in America.

Whether the chickenpox vaccine can also prevent shingles has yet to be seen, as the first round of children to receive it are now just 22 years old — decades away from the age when shingles typically appears. However, experts are clear that it’s best not to wait to find out.

“A million cases [of shingles] occur in the United States each and every year,” Dr. Schaffner said. “If you’re fortunate enough to reach your 80th birthday, you stand a one-in-three to one-in-two chance of shingles.”