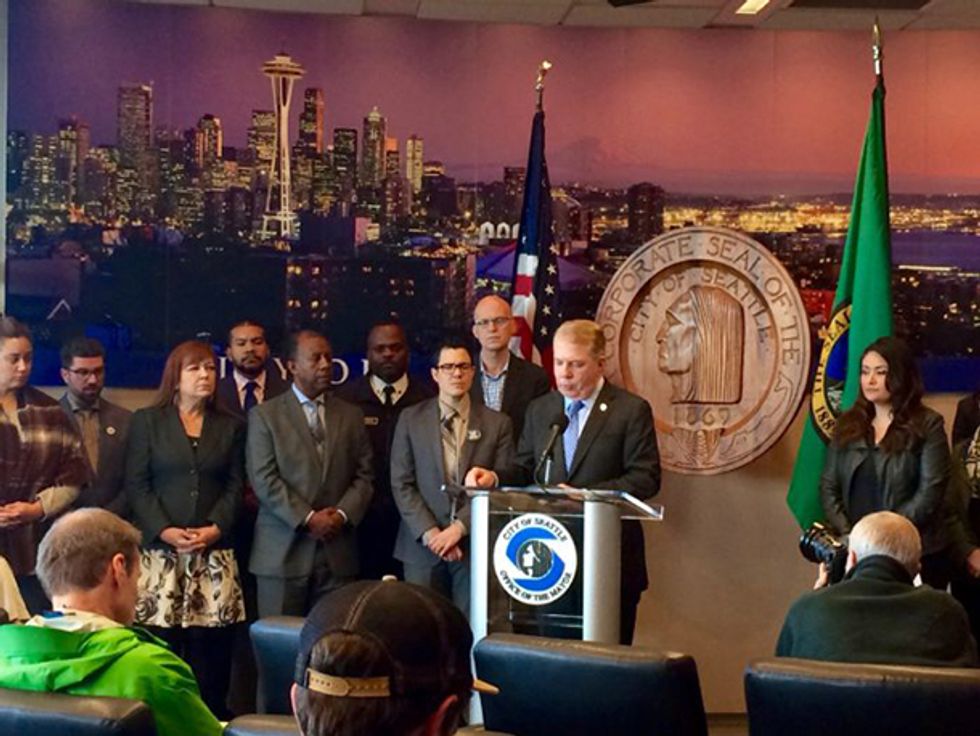 The City of Seattle is suing the federal government over the Trump administration's threats to withhold federal funds from "sanctuary cities," Mayor Ed Murray announced yesterday. The suit will be heard in the U.S. District Court of Western Washington, the same court that blocked Trump's first immigration ban.

“Our lawsuit is staying true to our values,” the mayor said. “We value civil rights, we value the courts and we value the Constitution.”

The lawsuit comes two days after Attorney General Jeff Sessions threatened to keep Justice Department grants from going to communities that do not follow the president's aggressive tactics toward immigrants living in the country illegally.

On January 25, Trump signed an executive order that would withhold “federal funds, except as mandated by law” from sanctuary communities. Murray attempted to use open records laws to get a clear definition of what constitutes

a sanctuary city from the Trump administration. When the administration did not respond in the required 20 days, the Seattle city council chose not to sue to force the release of the definition.

Unlike those actions, this lawsuit would have national implications. The lawsuit is based on the idea that the Constitution does not give the federal government authority to force local police departments to take action by threatening to withhold federal funds. Previous cases that have permitted similar actions, have been based on the federal right to regulate interstate commerce.

This lawsuit supports some of our most cherished values: civil rights, the Constitution and inclusiveness. A… https://t.co/tT4G7Exs5G
— Ed Murray (@Ed Murray) 1490829977.0

Seattle will also argue that they have not violated any laws by not collecting information from immigrants who are arrested or stopped for traffic violations. City laws, in fact, mandate that immigration status is not criteria for routine stops and arrests. The federal government should not be able to punish a local community for following its own laws, according to this logic. Seattle's city attorneys stressed their belief these laws violate the 10th Amendment.

"Failure to deport aliens who are convicted of criminal offenses makes our nation less safe by putting dangerous criminals back on our streets," a U.S. Justice Department representative said, in response to the lawsuit.

Mayor Murray disagrees with that logic. During the press conference announcing the lawsuit, he said, “It’s when you marginalize people and drive them away from city services and make them fearful of the police and push them underground that these communities become unsafe."