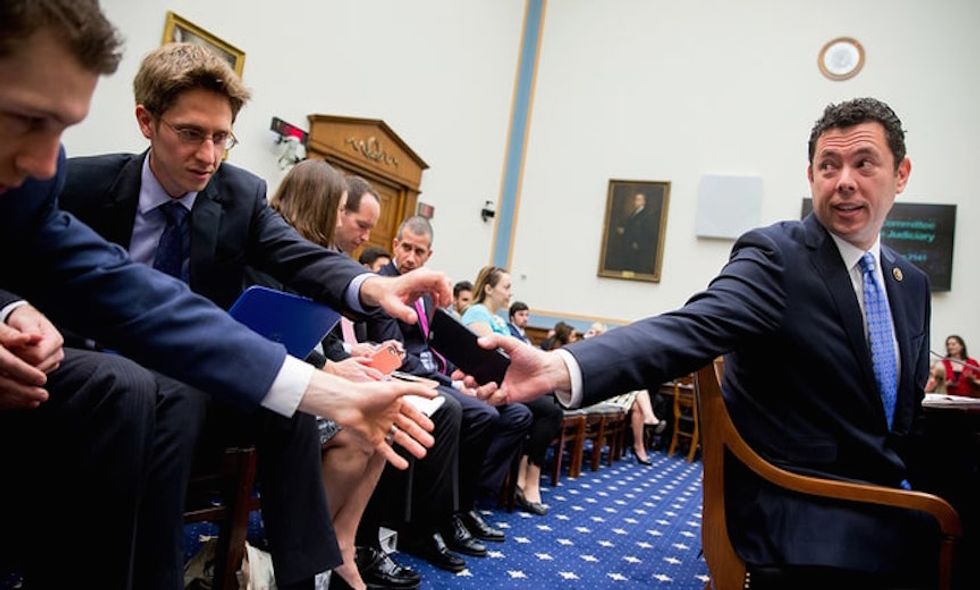 Representative Jason Chaffetz of Utah, previously best known for his town hall performance, proved to be even further out of touch with his comments yesterday about the new Republican plan to replace the ACA. On CNN's New Day, Chaffetz told Alisyn Camerota: "Americans have choices, and they've got to make a choice. So rather than getting that new iPhone that they just love and want to go spend hundreds of dollars on that, maybe they should invest in their own health care."

A new iPhone can be purchased for $649 to $969. Cell phone plans that include the cost of an iPhone are available for less than $30 a month. Few people can get health insurance at those rates, and if they do their out-of-pocket expenses are high.

According to CNN, "Under Obamacare, more than seven in 10 enrollees could find coverage for $75 or less in 2017, thanks to subsidies. Without that government assistance, the average cost of a bronze plan -- the cheapest available -- would be $311 a month for a 30-year-old in 2017, according to Health Pocket."

Chaffetz responded to the criticism saying, "What we're trying to say -- and maybe I didn't say it as smoothly as I possibly could -- but people need to make a conscious choice and I believe in self-reliance. And they're going to have to make those decisions."

Phillip Bump, in the Washington Post, points out that Chaffetz's comments show a lack of understanding of poverty and a tendency to blame the poor for their circumstances. Bump said:

The simplest path to generating opposition to government spending is to frame that spending as wasteful, and the simplest path to generating skepticism about poverty is to suggest that it’s avoidable if people take more responsibility for themselves. Chaffetz’s comment on the iPhone was about making America feel comfortable with a political choice, not about the actual problems of health-care access and poverty.

It's a critique that commonly has been leveled at the legislation itself, and Chaffetz comments are sure to fuel criticism that Washington is tone-deaf, even to iPhones.