Scientists Are Studying What Percentage of Cells in Our Bodies Are Not Human (Hint: It's Higher Than You Think)

There's more to you than meets the eye. 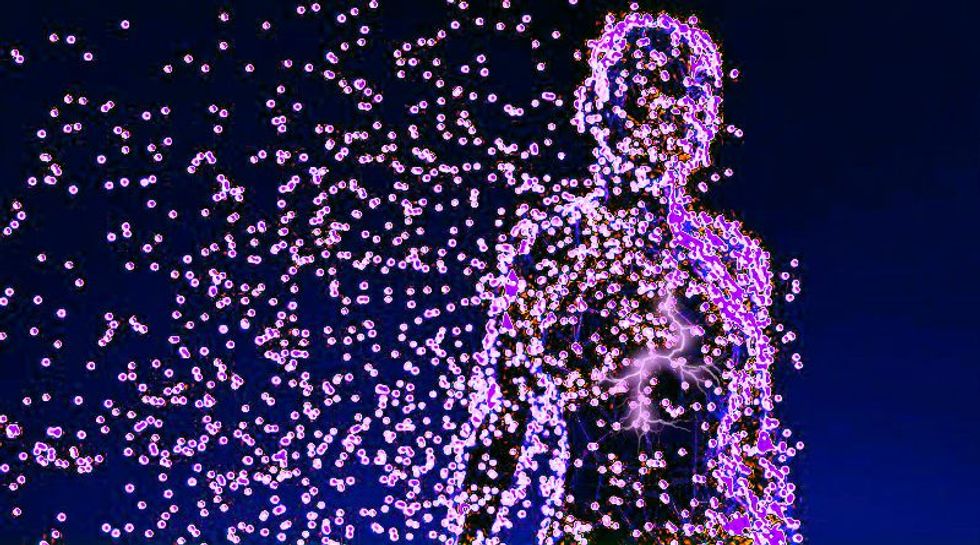 The former band White Zombie is famous for its song “More Human Than Human,” but it appears that when it comes to how many cells in your body are actually human, "Less Human Than Human" might be more accurate.

Indeed, in both the pharmaceutical and cosmetics industries, one of the hot topics of research is the human “microbiome” or the communities of microbes that make up a significant portion of the human body. Although the microbiome is currently a popular area of scientific research, the notion that a major portion of our cellular composition is not human is not a recent idea.

Actually, the idea that we are composed largely of microbial cells at a ratio of 10:1 dates back several decades. In 1970, it was estimated that there were as many as 100 billion microbes living in one gram of human intestinal feces of which there are roughly 1000 grams per the average person, thus 100 trillion microbes per person. This approximate amount was proposed by American microbiologist Dr. T. D. Luckey in a 1970 article titled “Introduction to the Ecology of the Intestinal Flora” in the American Journal of Clinical Nutrition. This was then followed 7 years later by another paper written by Dr. Dwayne Savage, who took the purely speculative 100 trillion microbe count and combined it with a prediction that the human body contains 10 trillion of its own cells to then create the 10:1 ratio.

Forty-six years later, this 10:1 ratio was disputed by scientists as speculative at best, as reported in The Atlantic by science journalist Ed Yong.

Multiple scientists have commented that the 10:1 ratio between microbial and human cells has little scientific basis. Dr. Ron Milo suggested that we are more likely to be on equal footing with an approximate ratio of 1:1. His 2016 review article quips that with every defecation, the ratio is upended to favor human cells over bacterial cells. Dr. Milo’s research group tried to provide a more accurate estimate of just how many microbial and human cells are inside the body. From studies that attempted to measure the number of cells in each human organ, they suggested that there should be about 30 trillion human cells.

To determine the number of bacterial cells, they looked to studies of the number of microbes in stool samples, since bacteria in the gastrointestinal tract vastly outnumber the microbial populations found elsewhere in and on the human body. They arrived at an estimate of 39 trillion microbial cells, which produces a ratio of 1.3:1; very nearly 1:1.

There are certainly caveats to this new ratio. For example, red blood cells, which represent 90% of the cells in the human body, might not be relevant since they do not undergo cellular division and contain no DNA in the nucleus. Interestingly, if they are removed from the equation, the ratio shifts back to the original Luckey-Savage estimate of 10:1.

Ed Yong questions whether the cell numbers matter in the grand scheme of things. Regardless of precise numbers, microbes will continue to play critical roles in human digestion, immune responses, and our responsiveness to certain medicines. Indeed, focusing on bacteria overlooks other smaller microbes like viruses that also have a profound impact on human biology. Science blogger Carl Zimmer has remarked that it is notable that with all the advances in life sciences, we are still unable to precisely define how many human and bacterial cells are present in the average person.

So, why is the microbiome gaining interest among pharmaceutical and cosmetic scientists?

A considerable amount of recent research has demonstrated that the microbiomes of different parts of the human body can play significant roles in various aspects of our health and appearance. For example, the resident bacteria on your skin — the skin microbiome (of which there are around 1,000 different species) — can influence your susceptibility to a variety of skin disorders. For one, a species of bacteria known as Propionibacterium acnes has been shown to play a significant role in acne and skin inflammation. In an example of bacterial species providing a benefit to humans is Staphylococcus epidermidis that is resident on human skin and contributes to preventing incursions by the highly pathogenic Staphylococcus aureus. It does so through the production of a specific enzyme that hinders the ability of S. aureus to form biofilms on the skin that could lead to infections.

These are just a few examples of the bacterial species present on the skin, but consider that there are also fungi, viruses, and other parasites present that have an impact on our health.

Historically, the characterization of the human microbiome has been accomplished first by culturing methods, where samples were collected and grown in a lab. This approach had several implicit biases, mainly that the results were skewed towards microbial species unimpeded by artificial propagation methods. Later, standard DNA sequencing was applied that illuminated the great diversity of microbes on the skin and elsewhere, where there was no bias towards organisms adapted to artificial conditions.

With the advent of next-generation sequencing, an even wider array of microbes is likely to be detected. In light of these findings, perhaps, the cell count ratio is unimportant, but the measure of diversity is the key. It seems humans are incredible habitats for a broad collection of bacteria, fungi, viruses, and parasites. “Less human than human” indeed!