The Japanese Have Started Putting QR Codes on Fingernails 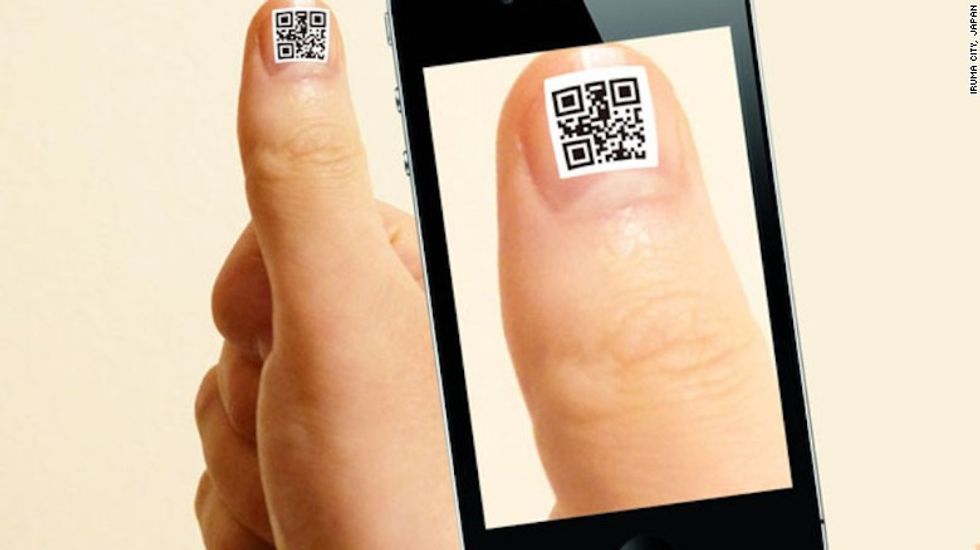 A company in Japan has developed a new kind of nail art for seniors that just might save their lives.

The 1-centimeter (0.4-square-inch) translucent stickers, developed by a technology consulting firm in Iruma, just north of Tokyo, are embedded with QR codes that can be scanned to reveal crucial contact information for their wearer in the event they go missing.

The waterproof decals are designed to be affixed to fingernails and last around two weeks. They can be scanned by anyone with a smartphone, bringing up an individual registration number for the wearer, plus his or her hometown and the phone number of their local city hall. Specific personal details are purposefully left out to maintain privacy.

"We only provide the minimum information with the police, so that the missing can reunite with their families as soon as possible," said Chie Sano, spokeswoman from Iruma city's welfare department.

The decals were first released in November 2016 as part of a free service for dementia patients in Iruma, the first such service in Japan. The city had previously issued GPS devices to seniors, but individuals suffering from memory loss often forgot to carry the devices with them when out and about.

According to the Alzheimer’s Association, six in ten people living with dementia will eventually wander, often becoming disoriented, confused and unable to recognize even familiar landmarks. It’s a common occurrence at all stages of the disease.

In 2015, a record-setting 12,000 elderly citizens with dementia were reported missing in Japan after having wandered away from families or care facilities. Of those, 479 were later found dead. Nearly 150 were still missing as of summer 2016.

Iruma expects 35 families to sign up for the QR-sticker service by March.

"Being able to attach the seals on nails is a great advantage," said one Iruma city worker. "There are already ID stickers for clothes or shoes, but dementia patients are not always wearing those items."

The nail stickers are part of a larger effort in Japan to address the challenges of a rapidly aging population. Elderly citizens are expected to make up 40 percent of Japan’s population by 2060: the highest proportion in the world due in large part to low fertility rates and an unusually long life expectancy. The average Japanese citizen can expect to live an average of 84 years—five years longer than the average American.

To that end, in the fall of 2016, Japanese police in Aichi Prefecture offered a 15 percent discount on noodles at popular ramen-soup chain Sugakiya to elderly people who agreed to hand over their drivers’ licenses. More than 4.8 million drivers over age 75 still hold a license in Japan.

The noodle discount, which followed a series of deadly automobile accidents involving elderly drivers, prompted a 95-year old Buddhist priest to publicly hand over his license in November 2016 in hopes it would inspire other elderly drivers to do the same.

“It’s stupid to try to maintain your licenses just out of pride,” noted the priest, Taa Shinen.

Japan hopes the QR stickers are yet another tool in the arsenal of proactive aging for the elderly and their families.