Why Scientists Are Inserting Human Organ Cells Into Pig Embryos 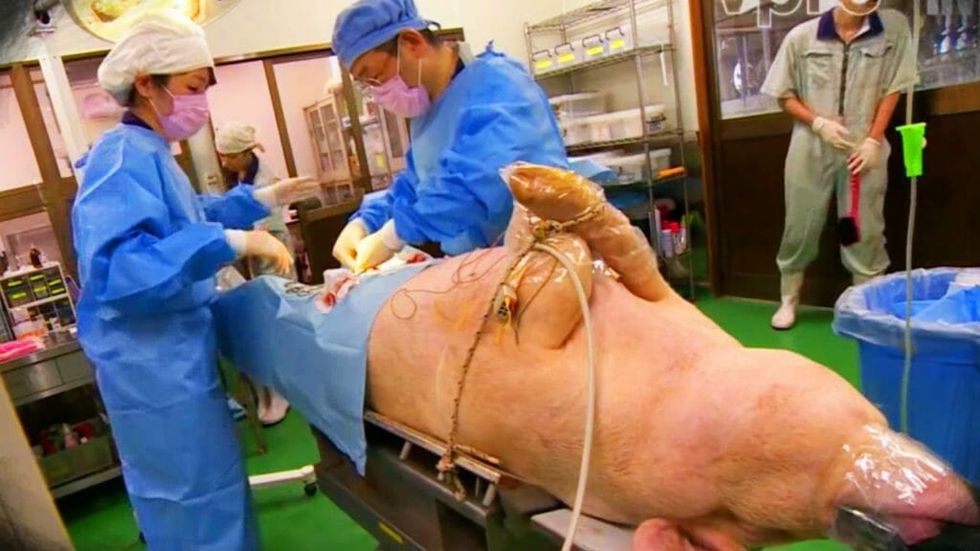 Scientists may have found a new way to grow human organs, and they won’t be coming out of 3D-printing machines or human cloning – though the new method may sound more suited to the pages of science fiction than a science lab. Researchers at University of California at Davis are experimenting with chimeras, embryos that contain both human and pig genes, in hopes that pigs might someday carry healthy human organs that could save the lives of those with progressive diseases or traumatic injuries.

The scientists conducting the experiments rely on the genetic editing tool CRISPR (a snippet of prokaryotic DNA that allows precise segments of the cell’s genome to be cut and replaced with something else) to inject a laboratory-made molecule into a pig embryo. The molecule deletes the pig’s pancreas gene, and then a human-induced pluripotent stem cell (which can turn itself into any kind of cell or tissue) is injected. The idea is that the removal of the pig’s pancreas gene and the insertion of the human stem cell will cause the pig to create a human pancreas.

As of now, researchers at UC-Davis are only allowing the embryos to grow inside the mother pig’s womb for 28 days, when organs and other early structures begin to develop. The researchers then remove the embryos and dissect them to see how the human stem cells have grown in the pig embryo. The main question is whether the human cells have created only a pancreas, or if they’ve spread to other parts of the pig embryo.

This is the major ethical concern for many scientists: creating a half-pig, half-human hybrid. “If you have pigs with partly human brains, you would have animals that might actually have

consciousness like a human. It might have human-type needs. We don’t really know,” said Stuart Newman, a professor of cell biology and anatomy at New York Medical College.

Scientists have been wary about these chimeric embryos. The National Institutes of Health imposed a moratorium on funding while officials explore the ethical issues. But the researchers at UC Davis aren’t the only ones experimenting with chimeras. A team lead by Walter Low at the University of Minnesota is trying to use chimeric embryos to create dopamine-producing human neurons to treat Parkinson’s disease, and Hiromitsu Nakauchi of Stanford University grew a rat pancreas in a mouse as proof of concept.

“I don’t consider that we’re playing God or even close to that,” said Pablo Ross, a reproductive biologist leading the team at UC-Davis. “We’re just trying to use the technologies that we have developed to improve people’s lives.”

Some bioethicists agree that the technology should be pursued if it means saving human lives. More than 120,000 Americans are on a waiting list for organ transplants, and around 22 die every day before they can receive one. But whether human organs harvested from pigs will save their lives remains to be seen.