The Largest Structure in Universe Discovered: One Ring to Rule Them All 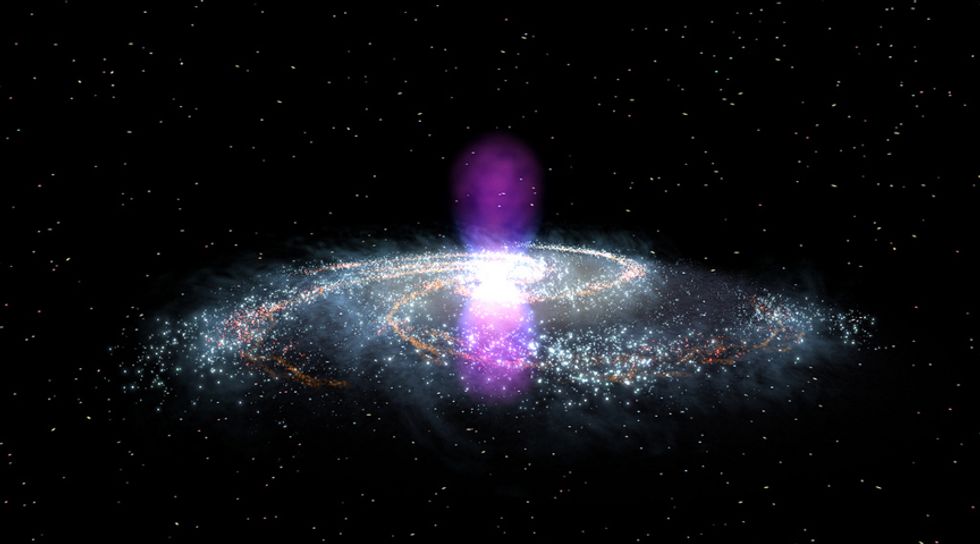 NASA image release November 9, 2010 Using data from NASA's Fermi Gamma-ray Space Telescope, scientists have recently discovered a gigantic, mysterious structure in our galaxy. This never-before-seen feature looks like a pair of bubbles extending above and below our galaxy's center. But these enormous gamma-ray emitting lobes aren't immediately visible in the Fermi all-sky map. However, by processing the data, a group of scientists was able to bring these unexpected structures into sharp relief. Each lobe is 25,000 light-years tall and the whole structure may be only a few million years old. Within the bubbles, extremely energetic electrons are interacting with lower-energy light to create gamma rays, but right now, no one knows the source of these electrons. Are the bubbles remnants of a massive burst of star formation? Leftovers from an eruption by the supermassive black hole at our galaxy's center? Or or did these forces work in tandem to produce them? Scientists aren't sure yet, but the more they learn about this amazing structure, the better we'll understand the Milky Way. To learn more go to: http://www.nasa.gov/mission_pages/GLAST/news/new-structure.html NASA Goddard Space Flight Center enables NASA’s mission through four scientific endeavors: Earth Science, Heliophysics, Solar System Exploration, and Astrophysics. Goddard plays a leading role in NASA’s accomplishments by contributing compelling scientific knowledge to advance the Agency’s mission. Follow us on Twitter Join us on Facebook Credit: NASA/Goddard Space Flight Center Scientific Visualization Studio

According to the Royal Astronomical Society, a team of American and Hungarian astronomers have found what appears to be a ring of nine galaxies that is five billion light years across. This pattern of galaxies would be a nearly impossible chance phenomenon, the odds being 1 in 20,000, according to the leader of the team, Dr. Lajos Balazs of Konkoly Observatory in Budapest. This suggests that the galaxies are bound together into this arrangement, most likely by gravity, in the same way that our sun is bound to the other stars of our galaxy, or by some as yet undiscovered force.

The sheer size of the configuration, one-ninth of the entire observable universe, makes this new discovery not only a candidate for the largest “structure” so far observed, but also a phenomenon that cannot be explained by our current theories of physics and how the universe was formed.

An image of the distribution of GRBs on the sky at a distance of 7 billion light years, centred on the newly discovered ring. The positions of the GRBs are marked by blue dots and the Milky Way is indicated for reference, running from left to right across the image. Credit: L. Balazs.

So far, the “galactic structure” still just a hypothesis. The team located it indirectly by measuring Gamma Ray Bursts (GRBs) recorded from both space and ground-based observatories. GRBs are intense bursts of radiation associated with enormous collapsing stars; they generally originate close to galactic centers and are often used to pinpoint the locations of distant galaxies. These nine bursts are quite interesting to astronomers because they all seem approximately the same distance away from us--seven billion light-years--and form a ring. So either there are nine galaxies in a ring, or the bursts signify something else entirely.

Assuming it is a nine-galaxy ring, this discovery calls into question our current understanding of physics and how the universe was formed, which suggests that there should be a limit to how large structures in the universe can be. To put it another way, there is a limit to how far apart things can be in the universe and still have some kind of influence on each other. When galactic bodies are close together, they form a vast array of structures (planetary systems, galaxies, and so on) because different objects are bound together by gravity. But objects that are too far apart simply ought not be able to exert any substantial influence.

This leads to one of the assumptions of modern-day astrophysics: the Cosmological Principle. When you look at the universe at a large enough scale, the matter should look uniformly random. There shouldn’t be any “pattern,” because everything is too far apart to produce any meaningful structure.

If these nine galaxies really are bound together in a five billion light-year wide dance, then we have to think a lot harder to figure out how that might be possible.

A Universe of Possibilities

Although science doesn’t have an explanation, yet, for what this ring of gamma ray bursts might mean, we can always turn to alternative possibilities--even science fiction--for imaginative answers.

In 1945, Fredric Brown, one of the most prolific short story writers from the “Golden Era of Science Fiction,” published Pi in the Sky: a story in which astronomers were perplexed by seemingly impossible movements and structures appearing in the night sky. It turned out to be a technologically-induced optical trick (“some kind of four-dimensional refraction”) that was created for marketing purposes.

While it is unlikely that an image of a five billion light year wide ring of galaxies is being projected in order to sell us something, it is certainly possible that that the pattern is

In 2011, Scottish science fiction author Ken Macleod wrote The Restoration Game, a novel in which the main characters come to realize that their world is a big simulation exactly because they find “glitches” in the simulation that can’t be explained any other way. While most of us would say postulating that our entire reality is a computer simulation just to explain a large ring of galaxies might be going overboard, you simply never know. As Sherlock Holmes famously said: “When you have eliminated the impossible, whatever remains, however improbable, must be the truth.” Indeed, in case you are ready to dismiss this idea as purely the realm of science fiction, physicist Paul Davies has written several articles popularizing the idea and explaining why, although there may not be any direct evidence yet that we are part of a simulation, our current theories of cosmology and quantum physics don’t rule it out.

It is also possible that we are seeing the handiwork of aliens so technologically advanced that they actually manipulate the positions of galaxies. If that is the case, these aliens are building on a scale way beyond the largest structures of most popular science fiction. The Citadel in Mass Effect and the Death Star in Star Wars are puny by comparison. Dyson Spheres, which are popular in many science fiction stories, are just barely bigger than a single star. And although the super-computer at the end of time in Isaac Asimov’s story The Last Question has sensors across the entire universe, it wasn’t a structure that required moving entire galaxies around into shapes that are billions of light years across.

It’s difficult to imagine what a civilization with that much power might be like. They fall in the classification of Type III or Type IV civilizations on the Kardashev Scale. Physicist and futurist Michio Kaku has collected the musings of astronomers, physicists and other scientists about what such civilizations might be like in his book Parallel Worlds: A Journey Through Creation, Higher Dimensions, and the Future of the Cosmos. These are civilizations that would have to harness the power of entire galaxies to supply sufficient energy for their needs.

Science will seek now to reconcile the observation of this superstructure with the known physical laws of the universe, and some adjustments to our assumptions may have to be made. In the meanwhile, within the realm of science fiction there is no lacking of super-powerful alien beings to be found. Building a massive ring of galaxies would be mere child’s play to an omnipotent agent like the Q Continuum in Star Trek. The Q, in fact, was such a prankster, he might even have done it just to mess with our minds.