The Extreme Origin of Our Moon 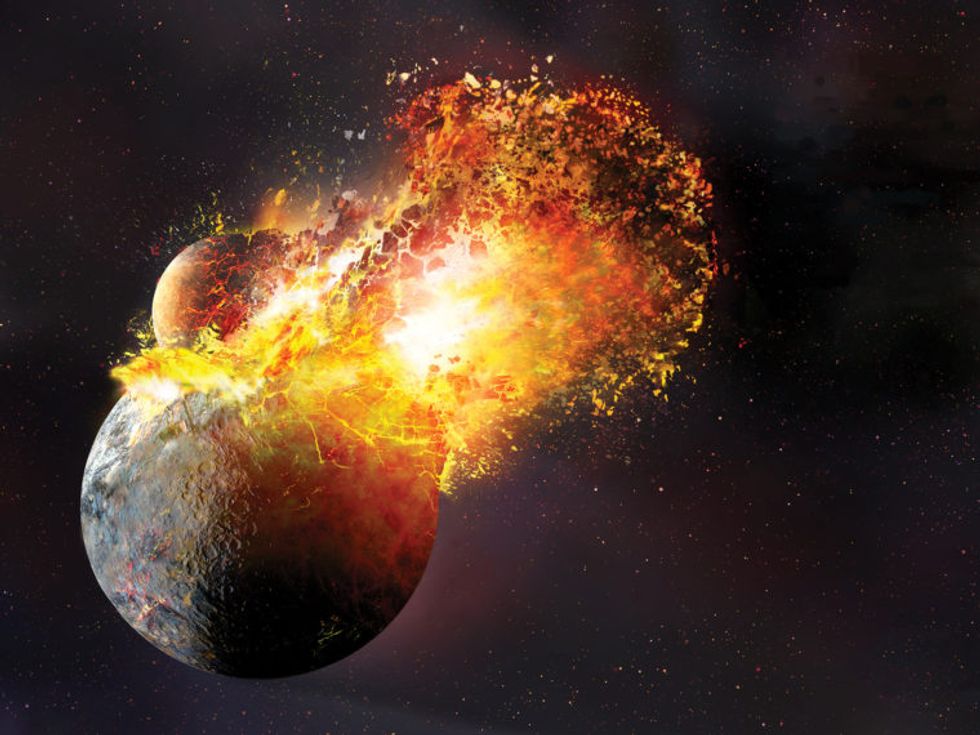 The moon’s origin story is a violent one: most astronomers agree that the moon was formed soon after the Earth’s formation, when a Mars-sized object called Theia struck Earth at an angle, maybe chipping off a chunk of the planet. The molten remains of Theia, the chunk of debris, and a cloud of vaporized material from the collision were captured in Earth’s gravity. They then eventually coalesced together to become the moon that we know today, coated in a layer of Earth dust from the collision and thus very geologically similar to Earth.

But the moon’s actual formation may have been even more brutal. A new study, published this month in Nature Geoscience, suggests that Theia didn’t just strike a glancing blow on the early Earth: they smashed together head-on. This would completely pulverize Theia, as well as a large portion of the Earth itself. Then, in a process similar to the one that forms planets, the resulting hot, dense disc of pulverized material would slowly clump together, some of it becoming what is now our moon while the rest rained back down on the devastated planet.

This theory is based on a new analysis of lunar samples brought back by Apollo astronauts in the late 1960s and early ‘70s. No new samples of dust and rock from the moon have been returned to Earth since the ‘70s, but scientific equipment and techniques have evolved significantly, so new analyses can have much higher precision and sometimes return surprising results. These new techniques revealed a tiny difference in the potassium isotope content of samples from the moon compared to samples from Earth.

The new analysis found that the lunar samples had more of potassium’s heavy isotopes than samples taken from Earth. The only way the moon could have gotten those heavy isotopes is if it formed in conditions of high temperature and pressure: the conditions that would be present in an extremely violent collision. In the other theory of the moon’s formation, in which the moon got its Earth dust from a shared cloud after the collision, the moon would actually have less of the heavy isotopes.

This study marks some of the strongest evidence yet for such an extreme moon-forming event in Earth’s past. However, not all researchers are convinced: the study examined only seven lunar rock samples and compared them to eight samples from Earth’s mantle. Future research will have to include more samples, but luckily the Apollo missions brought back a total of 842 pounds of material from the moon’s surface, so there are plenty of moon rocks to examine for clues about the moon’s real past.

A violent origin story for the moon may correspond to a more violent early solar system than scientists had previously imagined. If the moon came from such an obliteration of the outer layers of the Earth, what other colossal events haven’t we discovered yet.