Light-Activated “Nanomachines” Are The Future Of Cancer Treatment 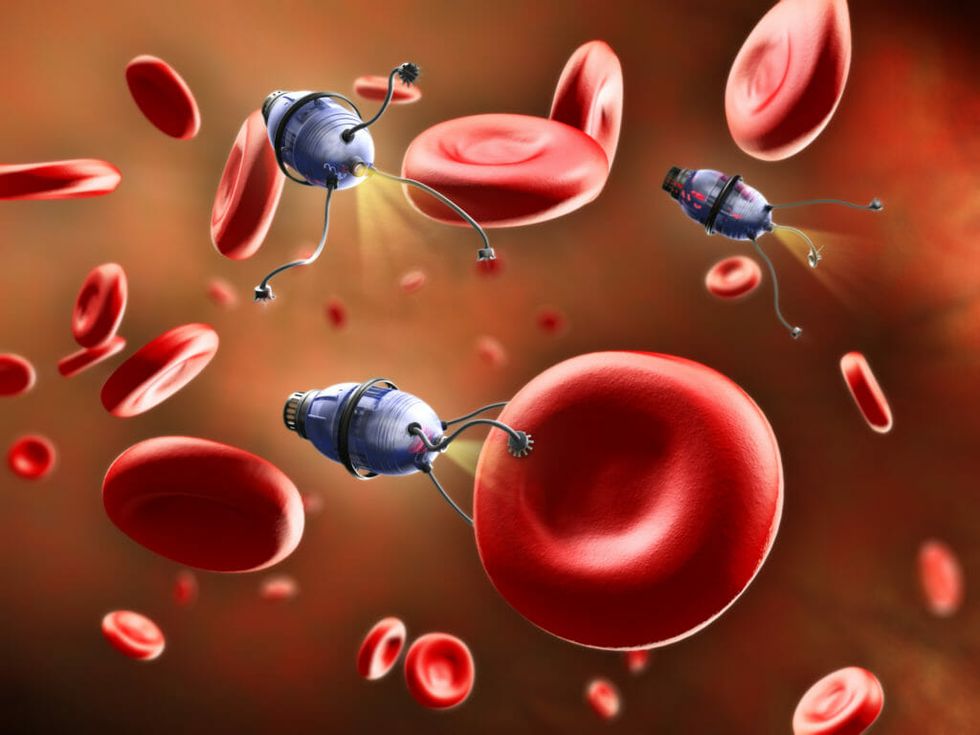 Scientists have developed nanomachines capable of targeting and drilling into cancer cells, and destroying them within one minute. With more research, this process may eventually be appropriate to treat a wide range of cancers, including otherwise untreatable cancer in humans.

Three scientists received the 2016 Nobel Prize in Chemistry for creating this multi-use technology out of a chain of atoms, commonly referred to as nanomachines.

Then, in a laboratory study published in Nature, scientists developed a specific nanomachine designed with a so-called “motor,” made from a rotor-like chain of atoms that researchers can trigger to turn in one direction at high speeds, causing a drilling effect. The stationary center piece, or stator, holds the nanomachine in place while the paddle-like rotor—made from three rings of carbon atoms—drills across the cell membrane. Meanwhile, arms of carbon, nitrogen and oxygen reach out from each side of the stator to grasp the cell’s surface.

Adding ultraviolet light to the nanomachine provides the essential power source to break the cell membrane, by spinning up to 3 million times per second.

Dr. James Tour, part of the international research team gathered for this study at Rice University in Houston, Texas, explained: "In this study we have shown that we can drill into cells, animal cells, human cells using these nanomachines, they will attach to the surface and then a light will be shone upon them and they will drill right into the cell.”

The study designed several different types of nanomachines for different types of cells. Each nanomachine is designed to target proteins on a specific type of cell. For instance, to identify prostate cancer cells, researchers added molecules to the stators’ arms to seek out proteins on those particular cells’ surface. The study also targeted nanomachines against human kidney cells, successfully drilling into them and killing them within 60 seconds. The attack on the prostate cells produced similar results.

According to Tour, "These nanomachines are so small that we could park 50,000 of them across the diameter of a human hair, yet they have the targeting and actuating components combined in that diminutive package to make molecular machines a reality for treating disease.”

Scientists hope to use this research to advance treatments a wide range of cancers.

Another scientist from the study, Dr. Robert Pal of Durham University, said, "We are moving towards realising our ambition to be able to use light-activated nanomachines to target cancer cells such as those in breast tumours and skin melanomas, including those that are resistant to existing chemotherapy.” Pal added, “Once developed, this approach could provide a potential step change in non-invasive cancer treatment and greatly improve survival rates and patient welfare globally."

In the future, researchers envision nanomachines treating cancer in two possible ways—either by destroying cancerous cells or the delivery of therapeutic medication after puncturing the cell’s membrane.

Tour explained, "I think therapeutically this will be a whole new way to treat patients, it's going to be an excellent application for cancer treatment, not just for killing of cells but for the treatment of cells, interacting with the human body using molecular machines."

Each of these types of cancer treatments present serious advantages.

As for nanomachines directly attacking cancer cells, Tour said, “It is highly unlikely that a cell could develop a resistance to molecular mechanical action.”

The alternative use for nanomachines proposed by the Nature study would create an incredibly precise delivery system for cancer treatment, after penetrating the cells’ membranes.

The next step in developing research using nanomachines to fight cancer is proceeding with studies involving microorganisms and small fish. Scientists hope to progress to rodents soon, and if successful, onto human clinical trials.