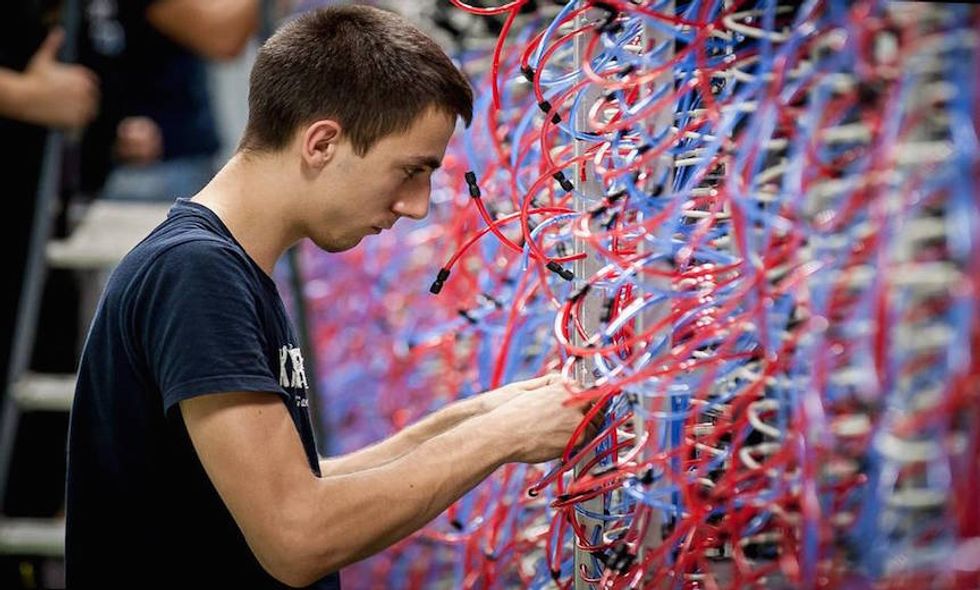 How often do you think about data? Many of us consider it only when our mobile plans inform us we are nearing, or have exceeded, our monthly data usage limit. But data is always there, and it has to be stored somewhere.

The team behind Microsoft’s Project Natick proposes we move our data beneath us, under the sea. Its website suggests: “50% of us live near the coast. Why doesn’t our data?”

Every link we click, photo we upload, Amazon page we browse, GIF we share, and word we publish must sit somewhere, permanently. Even if you never scroll down your Facebook page to see what you wrote three years ago, it remains stored in a data center, for posterity.

Information on the Internet is stored on servers in massive data farms around the world. These farms take up acres upon acres of land, and are filled with rows of loud, chugging machines that store data, and serve it as quickly as possible when requested.

The Internet, its user base, and the data created by its users continue to grow. In turn, the physical footprint of data centers must grow to accommodate additional servers. As competing web service companies such as Google and Amazon buy more land to house data

What’s more, companies are facing increasing energy costs to maintain these centers, and this is causing a number of concerns among the world’s largest technology companies. Data centers are not particularly sustainable or efficient. According to the National Resources Defense Council:

This electricity is primarily used to cool servers so they can perform optimally and avoid overheating—and crashing. To keep a server in pristine condition, data companies must keep their centers between 64 and 80 degrees Fahrenheit. If you consider how much it costs to keep your home that cool in the summer—without massive machines that produce extreme amounts of heat—you can imagine how costly this is for data centers.

Technology companies such as Facebook are buying land and building data centers in cooler climates with cheaper available power sources. But, as Will Rogers once said, “Buy land, they ain’t making any more of the stuff.”

What happens when we run out of land?

exist deep under the sea, either on the seafloor, or possibly even bobbing in a jelly-bean-like container.

Placing data centers underwater, Microsoft hopes, will leverage the cooler temperature of the surrounding water as a substitute for the expensive and energy-sapping cooling systems in their existing above-ground data centers. Microsoft is also considering adding tidal energy systems or turbines to help power the underwater contraption and further increase its sustainability.

Beyond its inexpensive cooling and operational benefits, this experimental housing for data could also deliver faster Internet service to major metropolitan areas, due to their proximity to the coasts. (Being physically closer to data makes retrieving and serving it quicker.)

A 2014 research paper written by Microsoft data center employees first floated the idea of an underwater data center solution. Yet Microsoft is still in the early testing phases of Project Natick. According to a timeline on Microsoft’s Project Natick website:

“After a very successful series of tests, the Leona Philpot (was) lifted out of the water and (was) brought back to Redmond for analysis and refitting.”

This is where their story stops, for now.

Even if Project Natick does not succeed in sending our information under the sea, Microsoft is confident that its findings and research will lead to other potential solutions to our connected planet’s growing data challenges.