Harnessing The "Magic" Of Mushrooms For Mental Health Treatment

A new study maps the enzymes and genes of psilocybin, the primary hallucinogen in magic mushrooms, laying the groundwork for future mass-production. 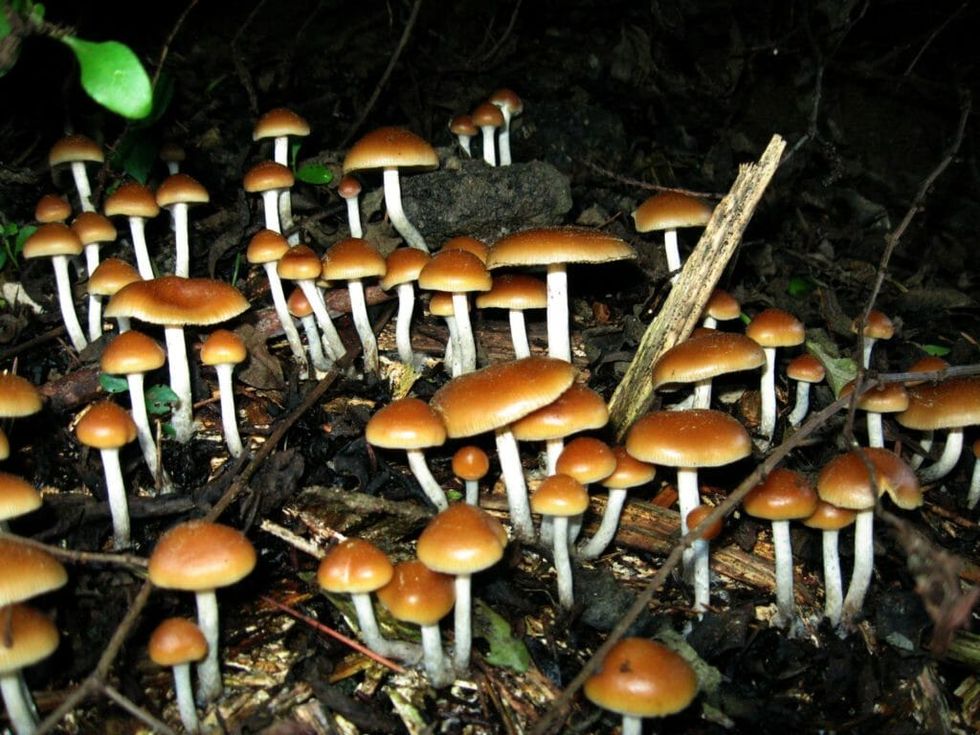 Scientists in Germany have isolated the enzymes necessary to produce psilocybin, the key hallucinogen in magic mushrooms. This knowledge lays the groundwork for scientists who envision mass production of the compound to treat a variety of mental health conditions.

The study discovered the correct sequence for psilocybin beginning with a 4-hydroy-L-tryptophon molecule, then used a series of enzymes to strip off carbon dioxide molecules, and finally adding phosphorus and methyl groups. Typically, replicating fungi requires four steps—each requiring a different enzyme—but the study streamlined the process to require only three.

To learn the correct sequence of the enzymes, researchers mapped the genomes of two species of magic mushrooms: Psilocybe cubensis and Psilocybe cyanescens. After discovering which genes would produce the necessary enzymes, scientists spliced them into E. coli bacteria.

A 1968 study had attempted the same procedure, but placed the enzymes in the wrong order. In 1970, psilocybin was classified as a Schedule 1 drug of the Controlled Substances Act—the most severely criminalized category for drugs with a supposed “high potential for abuse” and no currently accepted medical use. However, evidence indicates that psilocybin fails to meet either of those qualifications. The classification occurred following the onset of hyper-sensational media stories that misattributed a number of harmful effects, including suicide, to psychedelic drugs. This put a 30-year halt to further research.

In recent years—hoping to prove psilocybin a viable treatment for mental illness—scientists have contended with piles of paperwork and bureaucracy to complete small studies where they struggle to obtain the necessary amounts of the drug.

Through mapping psilocybin, in the study published in the journal Angewandte Chemie, authors hope they can help move the process along.

“Given the renewed pharmaceutical interest in psilocybin, our results may lay the foundation for its biotechnological production,” writes lead author Janis Fricke.

This new study may, at last, provide the basis for a medical-grade psilocybin to treat various conditions.

Before the ban in the 1970s, psilocybin was hailed by many in the medical and scientific community as a promising mental health treatment. Now, after a moratorium lasting decades, doctors, scientists, and mental health professionals alike believe the drug could be a viable tool in treating a wide variety of conditions including addiction, autism spectrum disorders, obsessive compulsive disorder, schizophrenia, depression, mood disorders and anxiety. And they are finding ways to prove it.

According to some studies, psilocybin does not treat mental health conditions simply by removing negative symptoms, but by creating some of the positive effects reported by the average person taking magic mushrooms—that is, creating a life-changing, transcendent experience.

For instance, in a Johns Hopkins study designed to test the drug’s effect on cessation of smoking—out of the 80 percent who stopped smoking for at least six months after using the drug three times—this so-called transcendent effect showed when that successful majority answered questions following the study.

More people in that group chose the following as the defining reason for their positive outcome: “by changing the way you orient yourself toward the future, such that you now act in your long-term holistic benefit, rather than acting in response to immediate desire.” The response chosen with highest frequency as most important was, “by changing the way you prioritize values in life, so that reasons to smoke no longer outweighed reasons to quit.”

According to lead author Matthew W. Johnson, those types of answers described more of a personal, spiritual, conversion rather than a typical dose of medicine. "Quitting smoking isn't a simple biological reaction to psilocybin, as with other medications that directly affect nicotine receptors."

The Johns Hopkins study also showed that standard cognitive behavioral therapy, including journaling, focusing on intent to quit smoking and the reasons why, also supported success.

Studies show that small amounts of psilocybin in conjunction with therapy may also improve the odds for treating depression. In theory, the drug blocks certain pathways while others are strengthened, which can be especially helpful when other methods have failed.

Researchers have discovered other unique benefits to psilocybin-assisted therapy.

"One important distinction from these other session-based treatments would be that the benefits of psilocybin-assisted therapy may only require a few dosing sessions and the effects appear to persist longer than other treatment options," Kelan Thomas of Touro University California wrote in an overview of psilocybin research.

In a 2016 study of psilocybin’s effect on depression, researchers gave the drug to 12 people who had moderate to severe cases for an average of 17 years, who had previously undergone other unsuccessful types of treatment. All of them showed notable improvement after no more than three weeks of receiving the dose. Five patients reported no signs or symptoms of depression after three months, compared to the 20 percent remission rate of the current most popular depression treatment, selective serotonin reuptake inhibitors (SSRIs).

Despite the unavoidable small number of participants and lack of control group, researchers hope this study will continue to add pressure to the government and medical community’s tight rein on illegal drug research.

Head author professor David Nutt, former senior advisor to the United Kingdom on drug policy, is now one of the U.K.’s top drug experts. He explained how important and difficult this study was to complete in the current political and scientific community: “Every interaction – applying for licenses, waiting for licenses, receiving the licenses, applying for contracts for drug manufacture, on and on – involved a delay of up to two months. It was enormously frustrating, and most of it was unnecessary.” He explained, “The study result isn’t the remarkable part – it’s the fact that we did it at all.”

Despite the current legal roadblocks, the few risks of psilocybin could be largely addressed through pharmaceutical mass-production, as envisioned by the recent mapping study. According to a recent worldwide study, magic mushrooms are the safest illegal drug—more so than marijuana, which remains illegal in some states. The largest risk people take from ingesting psilocybin is picking the wrong type of mushroom or acting in an unsafe manner while under the influence of the drug. Pharmaceutical dosing based on scientifically produced quality and quantities of the drug would eliminate the risk of choosing the wrong plant, which can cause death, and significantly decrease the likelihood of risky behavior from incorrect dosage.

Until now, the drug industry’s strict adherence to quality controls and the challenges of   genetic-engineering largely prevented significant progress. Learning the enzyme and genetic sequences could provide scientists with the necessary information to keep pharmaceutical research moving in this area. Likewise, pharmaceutical producers must follow precise safety protocols.

The ability to bring production of psilocybin into the hands of scientists represents a significant step toward the ability to treat patients with this drug via the open market.