“Pluto’s Little Sister” Makemake Has Something Even Pluto Doesn't 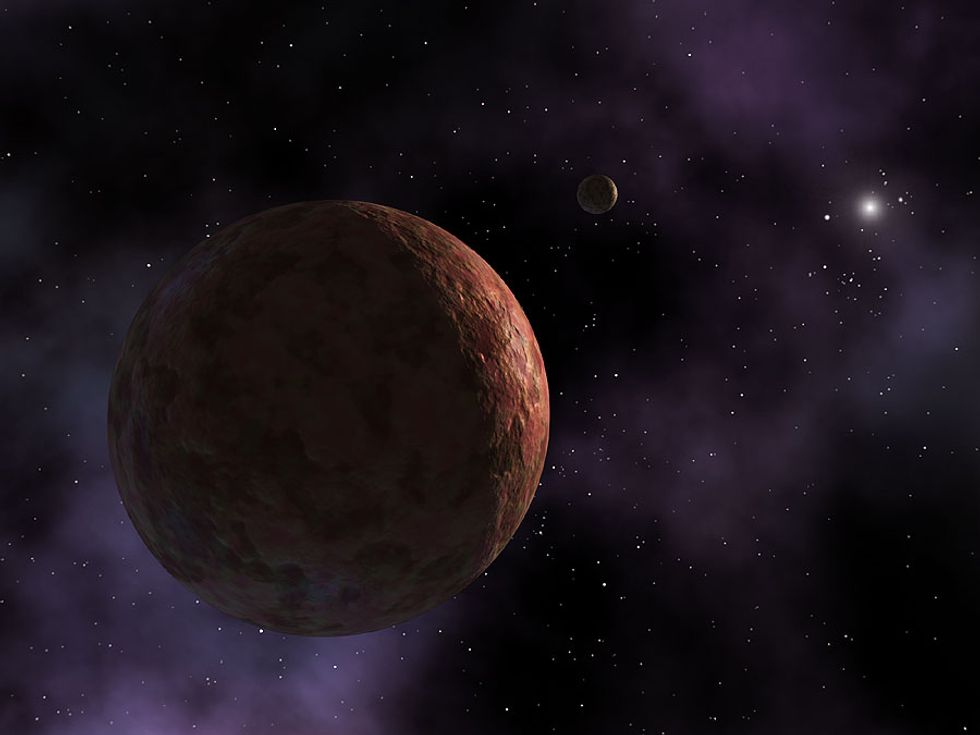 The dwarf planet Makemake, discovered in 2005, is cold, dark and remote. It sits in the Kuiper Belt beyond Neptune, orbiting the sun at a distance almost 46 times farther away than Earth and completing an orbit once every 310 Earth-years. Recent observation by the Hubble Space Telescope, however, has revealed that Makemake is not as lonely as it once appeared: it has a moon.

Until this new discovery, scientists believed Makemake was the only one of the four officially recognized dwarf planets in the Kuiper belt (Pluto, Haumea, Makemake and Eris) without a moon - the fifth official dwarf planet, Ceres, is closer to Earth and also moonless. However, there were some inconsistencies in prior measurements of Makemake’s light and heat. Observations from the Spitzer and Herschel space telescopes revealed warm, dark areas on Makemake’s otherwise bright, cold surface. However, Makemake’s apparently mottled surface would not make sense with a normally rotating dwarf planet unless it was spinning with one of its poles facing directly toward Earth, a fairly unlikely situation. The “dark moon hypothesis” offered a simpler explanation: a charcoal-black moon orbiting Makemake. “Imagine that the dark material isn’t on Makemake’s surface… it’s in orbit!” image analysis lead and paper coauthor Alex Parker tweeted. “If the moon is very dark, it accounts for most previous thermal measurements!”

Makemake is the second-farthest away of the official dwarf planets (Eris is the farthest) and the second-brightest (after Pluto). While it may seem strange that astronomers had been able to see moons around farther and dimmer planets while missing Makemake’s moon, the reality is that this moon, informally called MK2, was very good at remaining hidden.

MK2 is over 1300 times dimmer and much smaller than Makemake, and its orbit appears to be edge-on to Earth, so we don’t see it circling Makemake, only oscillating back and forth. Looking for it is like looking for a firefly flitting back and forth across a spotlight. If you watch it long enough and are lucky enough to look at the right time, as this team of astronomers did, the firefly might look obvious (in Parker’s words, “not actually that faint”), but it was easy to miss before.

Part of a team from the Southwest Research Institute in Boulder, Colorado, Parker was the first to notice Makemake’s moon in data from the Hubble Space Telescope. At first, he

The Moon in the Data

It is unclear where exactly the moon came from or why its surface is black. More observations of MK2 from Hubble will help astronomers determine whether its orbit is circular or elliptical, which will provide clues to its origin. If MK2’s orbit is elongated, it was probably simply captured in Makemake’s gravity as it floated by. Many smaller Kuiper Belt Objects have dark surfaces like MK2. This is often because they are too small and their gravity too weak to keep bright ices (like the ones that cover Makemake) in place.

However, MK2’s darkness could be due to constant interactions with the escaping atmospheric gases streaming off Makemake: like the top of a hearth blackened with ash, it could have accumulated compounds from Makemake’s past atmosphere. If MK2’s orbit is circular, as preliminary estimates indicate, the moon may be merely debris from a collision between Makemake and another Kuiper Belt Object. If MK2 was created by an enormous crash between two Kuiper Belt Objects, according to the paper, “The apparent ubiquity of trans-Neptunian dwarf planet satellites further supports the idea that giant collisions are a near-universal fixture in the histories of these distant worlds.” If all of the dwarf planets have satellites (moons), that may mean that Kuiper Belt Objects are often subjected to huge impacts.

While MK2 does create questions about the Makemake system and the Kuiper Belt, it will also provide answers. According to Parker, "The discovery of this moon has given us an

opportunity to study Makemake in far greater detail than we ever would have been able to without the companion."

Makemake is sometimes referred to as “Pluto’s little sister” because of their similarities: both are dwarf planets, both have surfaces coated in methane ice, and both have temperatures that can drop to -400 degrees Fahrenheit. The discovery that Makemake has a moon adds yet another similarity to Pluto. When Pluto’s largest moon, Charon, was discovered in 1978, it led to enormous new insights about Pluto itself, including that it was hundreds of times lighter than was originally estimated. “That's the kind of transformative measurement that having a satellite can enable,” Parker said: MK2 will almost definitely lead to a fundamental change in how we view the dwarf planet Makemake.

Looking at how MK2 orbits Makemake will allow scientists to calculate the system’s mass and probe its inner composition. As Caltech’s Mike Brown, a member of the team that discovered Makemake in 2005, said, “The wide range of densities of the dwarf planets is one of the most interesting mysteries out there. But we still have so few objects that each one adds a critical part of the story.” Small worlds like Makemake display a variety of internal compositions: they can contain rock and water ice, as well as other, more “exotic” ices and compounds. Since MK2 will allow scientists to tell Makemake’s density and thus the densities of the materials it’s made of, it provides a new clue about the family of dwarf planets.

The James Webb Space Telescope, scheduled to launch in 2018, will be able to conclusively test the dark moon hypothesis. Even before then, though, information about Makemake and its moon will continue to accumulate from new Hubble observations, teaching us about the outskirts of our solar system. “This new discovery opens a new chapter in comparative planetology in the outer solar system,” Buie said, and it will add to our understanding of the many worlds around us.