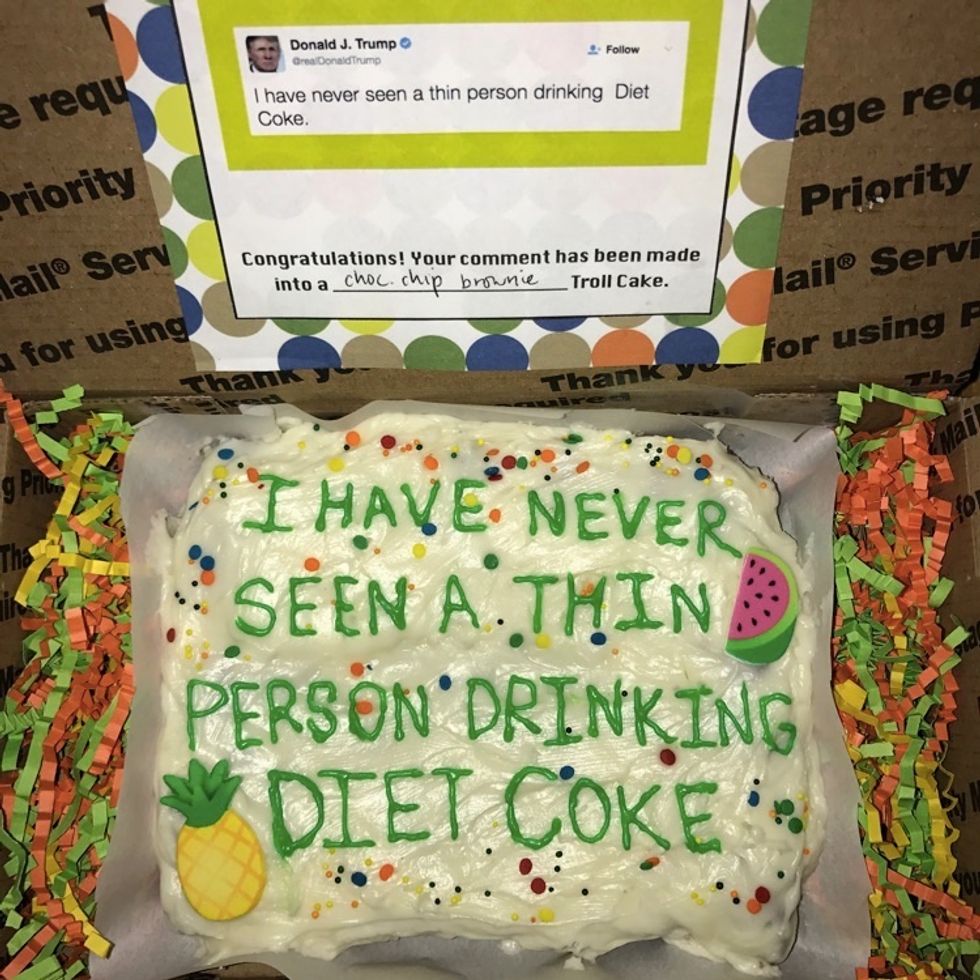 Ever read those nasty comments online and wished that you could make the trolls eat their words?

Well, now you can, thanks to Kat Thek, the creator of Troll Cakes bakery and detective agency in New York City. Thek takes people’s nasty comments, writes them out on a cake, and delivers the cake to the culprit.

“When you open it up, [the box] looks like 100 percent good news,” said Thek. “And then you see a screen grab of your comment, and it says, ‘Congratulations! Your Internet comment has been made into a Troll Cake.’”

Thek was inspired to begin Troll Cakes after seeing a woman comment “Your momma be so disappointed in you” on Dolly Parton’s Facebook page. She recalled that it was “infuriating, but also hilarious, because who would actively try to hurt her feelings? It was so ridiculous.”

Thek then put the words on a cake, tracked down the Facebook user, and sent it her way. You can have Thek do the same for you for a mere $35 ($65 if she has to track down the person’s identity).

“When someone says something mean, it’s just funny to put it on a cake,” said Thek. “You can’t take a troll seriously, it’s just an idiot who said something and if somebody wants to yell ‘I’m a huge idiot,’ I think it’s our duty to let them do that and put it on a cake and make them see how it looks.”

You can also pay a discounted $30 to have Thek bake up a “Tiny Hands Special”—which she promises will be “bigly satisfying.” These cakes get delivered to the White House with one of Donald Trump’s tweets emblazoned on top. Ones she has already delivered include “I don’t stand by anything” and “I have never seen a thin person drinking Diet Coke.”

Thek said she gets about two dozen people a day contacting her with Trump tweets. “My theory is that it’s satisfying to know that this is an option. It feels good to identify the Trump tweet that speaks to you as being the most insane and know that it could be put on a cake and mailed to the White House.”

However, she has gotten some pushback, with some accusing her of skirting the line of terrorism. “Here’s where we land on that: if putting the president’s exact words into icing on a cake is considered an act of terror, the problem is not the cake.”

Thek knows that her cake business won’t stop the onslaught of negative comments on the web—or Trump’s tweets. But it has instilled in her a new life motto: “You should live your life as though everything you’re gonna do could be put on a cake.”