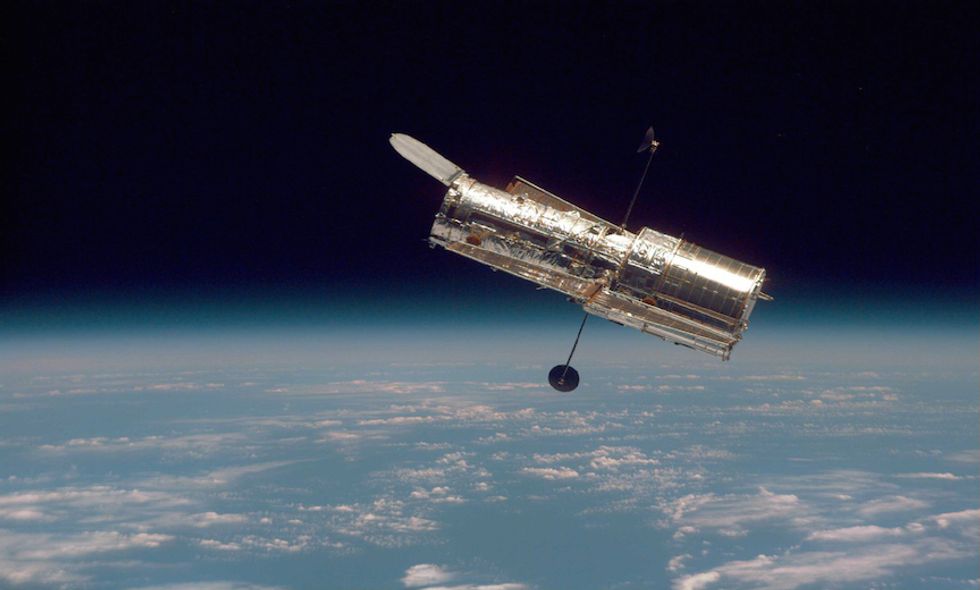 The Hubble Space Telescope may be on its last legs, but it appears destined to go out with a bang. The 25-year-old Hubble recently displayed an image of a galaxy 13.4 billion light years away, a distance once thought to be impossible to see with current technology.

“We’ve taken a major step back in time, beyond what we’d ever expected to be able to do with Hubble,” said Yale University astrophysicist Pascal Oesch. The galaxy, named GN-z11, existed 400 million years after the Big Bang. In other words, GN-z11 existed when the Universe was just 3 percent its current estimated age of 13.7 billion years.

The galaxy burned so hot, it was bright blue and had a rate of star formation ten times that of our Milky Way.

“It really is star bursting,” says Gabriel Brammer, astronomer at the Space Telescope Science Institute. “We’re getting closer and closer to when we think the first stars formed.”

When viewed from a magnified image from the Hubble, GN-z11 appears as an amorphous dark red splotch rather than a vibrant blue. That’s because of something called redshift, which is a result of the expansion of the Universe. The farther an object is from us through time and space, the more the light is stretched to longer, redder wavelengths. Previously, the galaxy believed to be the farthest in time and space from Earth had a redshift of 8.68. GN-z11 has been assigned a redshift of 11.1.

Scientists made GN-z11’s identification using the Hubble’s Wide Field Camera 3, which was installed in 2009. The team of astronomers behind the discovery

used a new method to analyze light from the far-flung galaxy. Instead of using a standard light wave signature marker to measure the spectrum precisely with a ground telescope, astronomers looked beyond to a longer but messier light wave spectrum.

The longer spectrum may have been noisier and harder to interpret than a standard spectrum, but Oesch says the measurement of the galaxy’s distance was as clean as possible. He adds that this new technique is becoming standard.

"This really represents the pinnacle of Hubble's exploration of galaxies across cosmic history," says Oesch. “Hubble has proven once again, even after almost 26 years in space, just how special it is.”

However, not all scientists are on board with the GN-z11’s reported cosmic distance. "The Hubble grism [grating prism] is a very low-resolution instrument and, in deep fields, all the spectra overlap and it requires considerable effort to disentangle the signals,“ says Richard Ellis of the European Southern Observatory, who found the galaxy that held the previous record. He adds that "the ultimate proof can only come from a higher resolution spectrum" such as that of the Hubble’s successor, the James Webb Space Telescope, due to launch in 2019.