A Computer Is Picking Names Like "Spockers" for Rescued Guinea Pigs 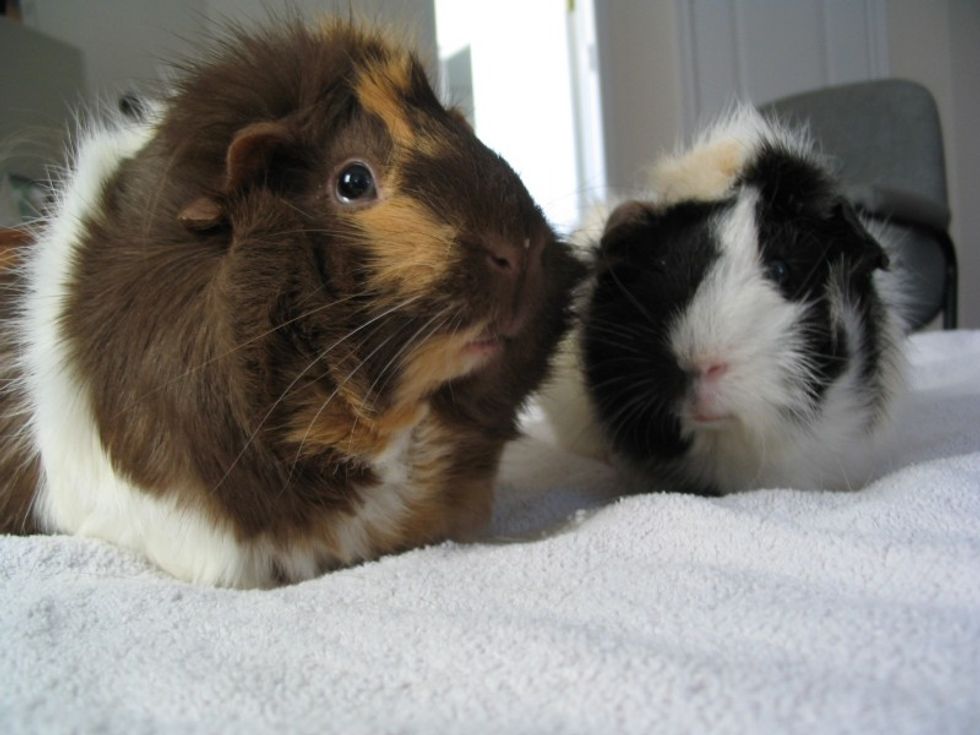 What do you do when you have more guinea pigs than you can name? That’s what happened to The Portland Guinea Pig Rescue (PGPR), an all-volunteer, foster-based 501(c)(3). The organization was overwhelmed with guinea pigs after a few hoarding situations converged and they lost half of their foster space. Director Kate Brownlie and volunteer Dominique Chishti kept up their spirits with occasional visits to the blog Lewis and Quark.

The blog is a labor of love run by research scientist Janelle Shane. In it, she documents her use of neural networks—a sort of A.I. that uses datasets in a way that mimics actual human learning—to create things like 1980s action figure names (Action Bun, anyone?) and potential Dr. Who episodes (Planet of Lime sounds promising).

The two were giggling over Shane’s use of neural networks to generate paint colors, Chishti told Second Nexus, and thought they would make fun guinea pig names. “I thought maybe she’d already done something with a pet name dataset and was surprised she hadn’t yet, so I e-mailed her on a lark and was so surprised and thrilled when she responded back only a few hours later.” In fact, Shane told Second Nexus this was likely the first time anyone had used neural networks to this end.

What Are Neural Networks?

Neural networks are a type of artificial intelligence--generally software simulations-- that mimic the way human brains learn. Rather than a programmer inventing rules for the program to follow, neural networks are able to intuit their own rules about datasets. “I myself don’t give any feedback at all,” said Shane. “You can’t tell it, it just has to learn.”

A neural network “learns” by examining data sets and then attempting to generate similar results. After generating results, or predictions, it compares its own output to those it was meant to produce. After comparing, it modifies the weights of connections to make the actual output more closely match the intended output.

How Did The Neural Network Do?

PGPR supplied Shane with a list of the names of every guinea pig they had ever rescued, the names of their own pet guinea pigs, and all the guinea pig names they could find online—a list about 600 names deep.

Shane then created a network based on an open-source program created by Andrej Karpath called char-rnn. Using the names from the list like “Snickers,” “Pumpkin,” “Ginger,” and Rascal,” the network was able to come up with some pretty amazing guinea pig names. Names like “Princess Pow” and “Spockers.” PGPR was thrilled. “The names she generated were so fun that we couldn’t wait to use them and renamed a bunch of pigs that had been with the rescue for a while and weren’t getting much interest from adopters,” said Chishti.

Sometimes, though, the predictions are a little. . . well. . . off. For instance, the network generated the difficult to pronounce “Bho8otteeddeeceul" and “Butty Brlomy.” Also the slightly off-putting “Fleshy” isn’t likely to adorn a potential guinea pig adoptee.

“It does mean that a certain amount of frustration will come up,” said Shane. The network was particularly fond of the name Stinky. “It has no context for what a guinea pig is or what English is,” and taken out of context, Stinky is a pretty cute name.

Is This The End of A.I. Pet Naming--Or Just the Beginning?

The good names, however, were so good that Shane was soon contacted by other animal rescue organizations. The Morris Animal Refuge in Philadelphia sought help with naming some of their guinea pigs, and Shane fired up the neural network again to generate super-sweet names like Spooty and Mumpkans. (Though Potty and Farter were also generated.)

“Just to keep things interesting,” Shane then decided she would cross guinea pig names with a list of metal bands and superheroes. So yes. Feel free to add Spider-Woom, Dark Lard or Dark Piggy to your potential guinea pig name list. (Or baby names for that matter.)

Next up: A kitten rescue group. The neural network should be firing out names for those by the end of the week.

In the meantime, head over to the PGPR website for your chance to snap up Popchop and Fuzzable, or Buzzberry and After Pie. In addition to having some pretty darn cute additions to your family, you’ll also have a great story to tell.