Gravity Waves: What Can They Teach Us About the Universe? 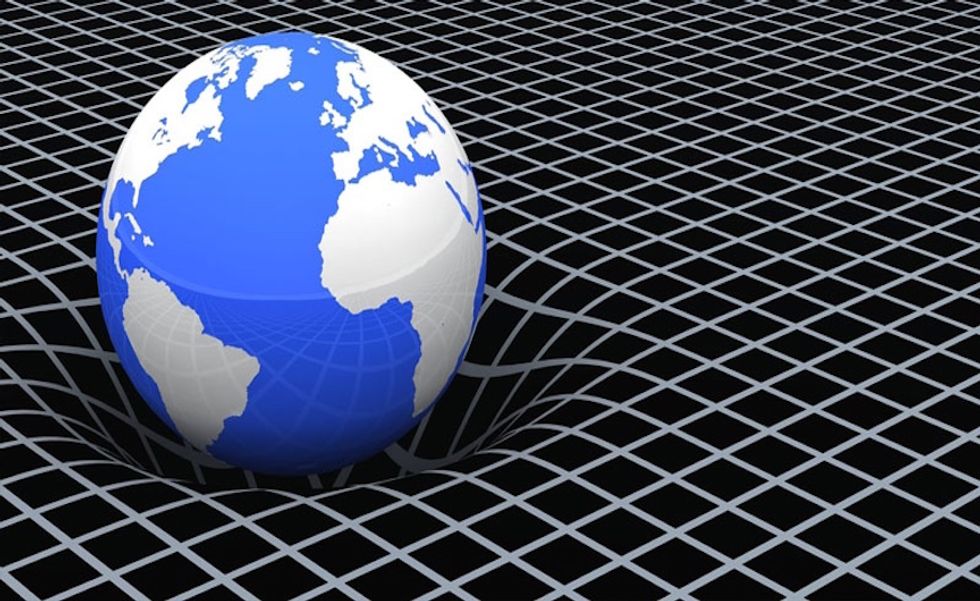 There is renewed chatter among physicists about a long-awaited discovery that may come some time this year: the observation of gravity waves. The anticipation is like the lead up to the release of The Force Awakens, but for high energy physicists rather than Star Wars fans. What might happen and what will it mean? And the stakes are high. If we can detect gravity waves, we can open the door to new theories about the fundamental nature of the Universe.

Gravity waves are ripples in spacetime (space and time interwoven into a single continuum) caused by massive moving objects, first predicted by Albert Einstein based on his theory of general relativity. According to his theory, gravity is actually a manifestation of distortions in the fabric of spacetime caused by massive objects. When objects move through spacetime, they create waves, much like a boat moving through water.

These waves are subtle and are detectable only when massive objects travel at enormous speeds, such as when two black holes slam into each other. These grand cosmic events happen all the time, but are so far away that their after-effects are barely detectable by the time they reach our planet.

But “barely detectable” is still detectable—in theory. In 2002 physicists at Cal Tech and MIT launched LIGO (Laser Interferometer Gravitational Wave Observatory), a massive research project created to detect minute fluctuations in spacetime that would provide evidence of gravity waves. A complex system of lasers and mirrors searched for evidence of gravity waves until 2010, but found nothing. LIGO closed, underwent a $200 million overhaul, and re-opened in September 2015 for its first observational run, called “01.” In just a few weeks, a rumor began circulating that it had detected a gravity wave. Since then, the chatter has not died down, even though the official response is still: "We are analyzing 01 data and will share news when ready."

LIGO is not the only operation hunting for gravity waves. The North American Nanohertz Observatory for Gravitational Waves (NanoGRAV) is a network of observatories recording data from pulsars in an effort to detect evidence of gravity waves, and LISA (Laser Interferometer Space Antenna) is a planned space-based observatory designed specifically to scan

the Universe for gravity waves. It appears as if everyone wants to “discover” these elusive ripples in the fabric of the Universe.

The excitement is about more than bolstering support for Einstein’s theory of general relativity. Physicists have been struggling with growing concerns over how to test theories without applying them to the “observed Universe.” Many variations of string theory and quantum mechanics make predictions that are either untestable, or can be tested only at energy levels inaccessible, at least for the foreseeable future. This has created a kind of crisis in physics, with some worrying we’ve reached the end of verifying theories through experimentation.

But if we can measure gravity waves, some of the “untestable” predictions may become testable after all. For example, one variation of string theory suggests that when the Universe was young, it had fewer dimensions of space. At the extremely high energy levels shortly after the Big Bang, there may have been only one dimension of space; as the Universe expanded and cooled, more dimensions of space appeared. This theory even suggests that the current Universe has four dimensions of space, even though we only experience three. (As many physics geeks know, this is not the first time an advanced theory in physics has made bizarre and counterintuitive predictions.)

Measuring gravity waves would give us an opportunity to test this theory; if confirmed, it ties into a whole host of other implications as well. Stojkovic says the theory eliminates the need to postulate “dark energy,” a commonly used but completely untested idea in physics, and it could resolve some problems with current theories in particle physics as well. And if the number of dimensions of space has increased over the eons from one to four, one has to wonder if it may increase again. How long will it be until our Universe has five dimensions of space, and what will that be like?

So far, it is only speculation. Still, there are plenty of intriguing possibilities to ponder while we wait for the official results of the analysis of 01 from LIGO, coming to a research journal near you later this year.