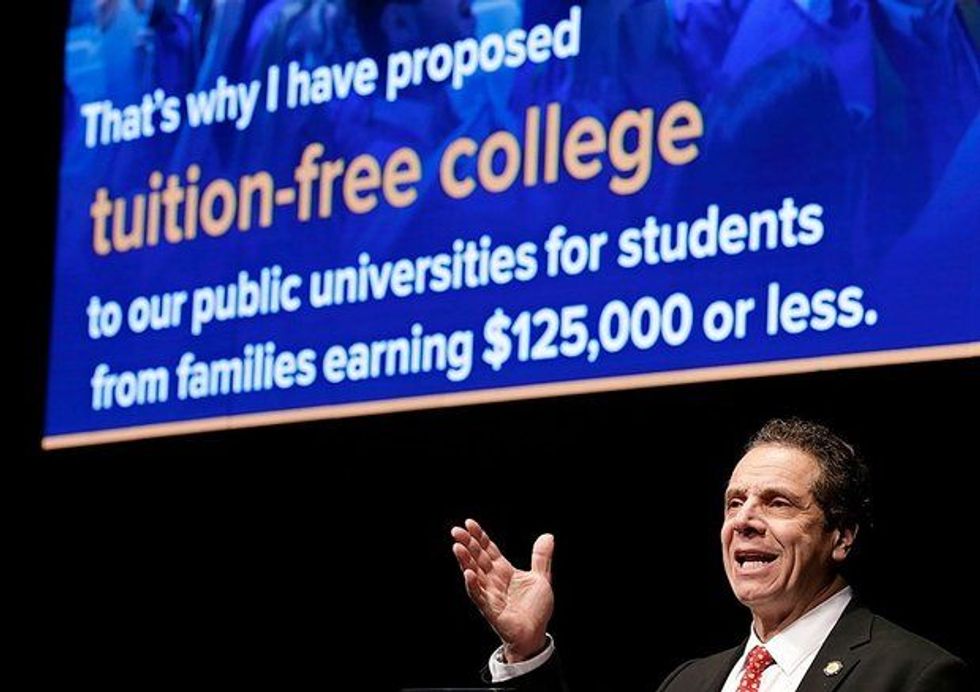 Students from families earning less than $125,000 in New York a year will be able to attend college for free. That's the promise of the Excelsior Scholarship, and it is part of a historic budget deal state lawmakers in New York agreed on yesterday. But there's a condition: Recipients will be required to remain in the state for a few years after graduation. That helps assure that New York gain the benefit of its investment in these students.

"This is the difference that government can make," said Governor Andrew Cuomo. "There is no child who will go to sleep tonight and say I have great dreams, but I don’t believe I’ll be able to get a college education because mommy and daddy can’t afford it. Every child will have the opportunity that education provides."

Tuition at SUNY's four-year schools is currently $6,470, while the community colleges average $4,366 a year. The scholarship will cover any amount of that total that is not covered by

Pell Grants and current income-based tuition assistance. It is estimated to cost the state $163 million dollars in the first year.

The Excelsior Scholarship has the highest income eligibility threshold of any similar state-wide proposal. It requires students to attend college full-time to earn a two-, four-, or five-year degree from any of the State Universities of New York (SUNY) or the Fashion Institute of Technology. Students with disabilities are not required to attend full-time.

Governor Andrew Cuomo proposed the plan in January. It was part of the budget passed by the New York State Assembly yesterday and will become law when the New York state Senate passes the budget later this week. The biggest change from the initial proposal is the requirement that graduates who use the program stay in the state after graduation. The condition has upset some education advocates.

Students are to remain as residents for the same amount of time that they had the scholarships—two years for community college students, four to five years for those earning bachelor's degrees. If they move out of state, the scholarship amount is converted to a student loan. The provisions will allow exceptions for graduate school and financial hardship.