World's First Lab Grown Chicken Has Been Tested… And Tasted 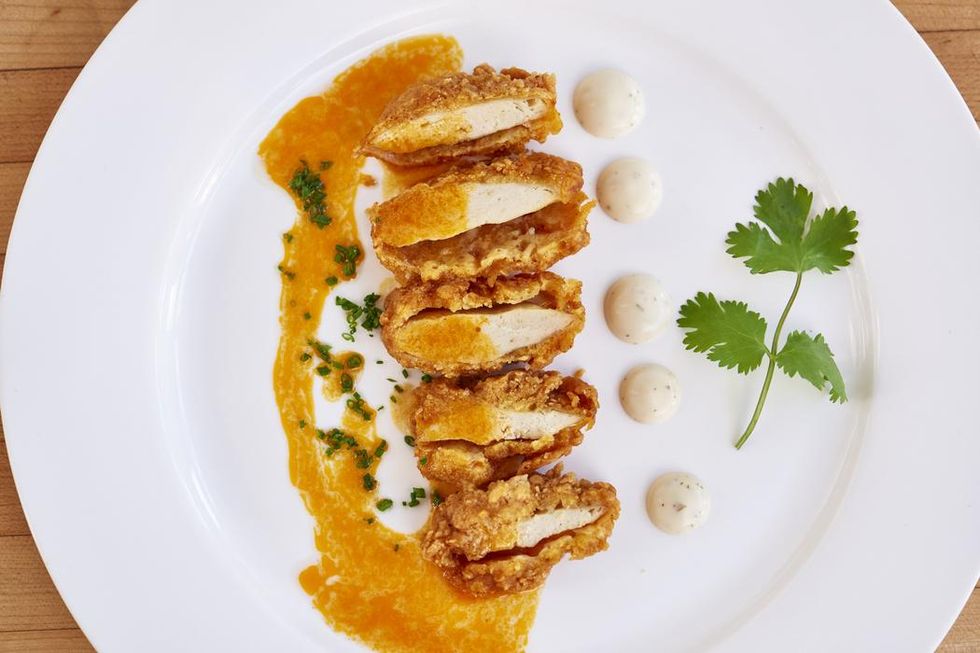 Biotech food startup Memphis Meats had delicious news to share at a mid-March press event in San Francisco — and they delivered it on plates of Southern-fried chicken and duck à l’orange.

The San Leandro, Calif.-based company offered 25 people the chance to taste the first chicken and duck meat grown from cells in a lab.

"[It] was rich, juicy, and savory," said one taster, Emily Byrd from the Good Food Institute, of the duck. "The mouthfeel was superb and tender. It was incredible to be eating the best duck of my life and know that it was produced in a way that is astronomically better for the planet, public health, and animals.

"Next, I moved on to some fried chicken,” Byrd continued. “I was able to taste the future, and I went back for seconds. Clean meat is 100 percent real meat, so it tasted just like, well, what it was."

Memphis Meats first made news last year after unveiling a meatball grown entirely with lab-cultured beef. Though much of the press centered on the fact the product cost $1,000 per ball, it marked the first time a company announced its intention to bring cultured meat to the U.S. consumer market.

The process of growing poultry meat is much the same as growing beef, or even pork: Cells with a high capacity to regenerate (usually stem cells) are isolated from the actual animals, then placed into bioreactor tanks with oxygen, sugars and other nutrients that encourage them to grow. 9 to 21 days later — about the same time it would take a live chick to hatch — the meat is ready for harvest, featuring the same taste, texture and nutritional value as if conventionally grown.

It’s often referred to as “clean meat” (a term coined by the Good Food Institute), since its laboratory provenance ensures it’s free of antibiotics, pathogens, and bacteria.

Given that chicken is an annual $90 billion market in the U.S. alone (the average person reportedly consumes 90 lbs. per year), poultry was an obvious next step for Memphis Meats.

“It is thrilling to introduce the first chicken and duck that didn’t require raising animals,” said Dr. Uma Valeti, co-founder and CEO of Memphis Meats. “We really believe this is a significant technological leap for humanity, and an incredible business opportunity — to transform a giant global industry while contributing to solving some of the most urgent sustainability issues of our time.”

However, as with the in-vitro meatball, getting the cost of lab-grown meat down is proving to be Memphis Meats’ most pressing challenge. One pound of cultured chicken currently costs about $9,000, compared with less than $4 a pound for conventionally grown chicken breast at most U.S. grocery stores.

Regardless, Valeti is hopeful that by 2021 Memphis Meats will be able to lower the price to the point where it will be a viable option for consumers: "We believe that in 20 years, a majority of meat sold in stores will be cultured,” he said.