Heavy polluters still have overwhelming influence in government climate change policy, but new companies like Apple and Tesla are changing the channel. 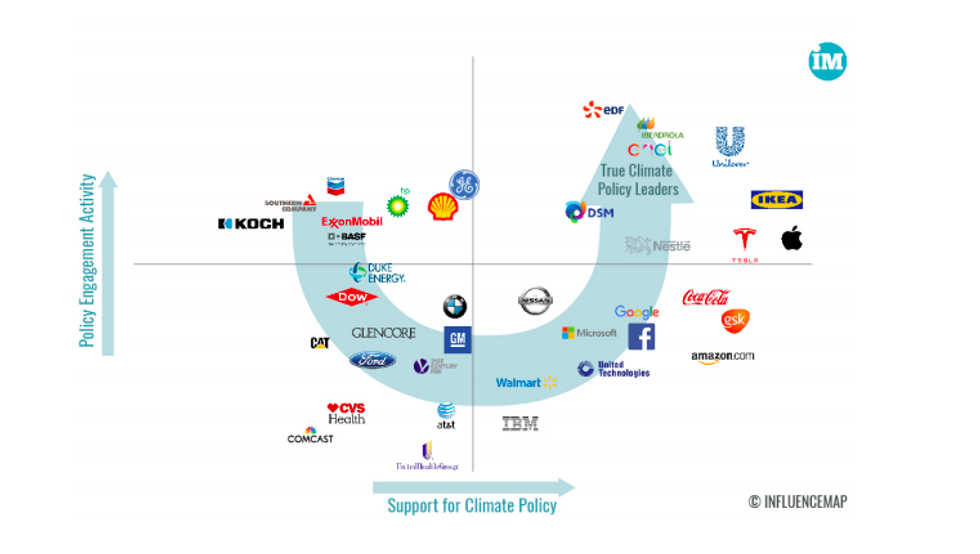 The Corporate Carbon Policy Footprint (CCPF) must scare the bejesus out of climate activists.

Released in August, the CCPF argues that the bad guys take 35 of the top 50 most influential positions among companies informing climate policy in democratic governments around the world. The world’s heaviest polluters not only have a seat at the table when it comes to influencing and writing government policy, they have an overwhelming majority of seats.

Clearly, calling out heavy corporate polluters based solely on climate policy is a value judgment, but the Corporate Carbon Policy Footprint doesn’t make that call lightly. Many of these companies have admirable philanthropic policies, and others might do well by employees or shareholders. But creating jobs and shareholder wealth won’t help the 200 to 500 million climate refugees expected by 2100, or provide much comfort to the people of Boston, Miami, New Orleans, New York, Rotterdam, Mumbai, Shanghai and Alexandria as these cities begin returning to the sea later this century. And those are just two of many overwhelming changes scientists tell us to expect if we fail to decarbonize completely before the climate crisis truly hits. Hurricanes Harvey, Irma, and Maria are just the warm-up act in a world gone awry.

In weighing the influence of major corporations in building or preventing the transition to a low-climate world, CCPF doesn’t only measure what they do. It measures what they say about they do, and their ability to make their voices heard.

In the bottom left is mostly populated by heavy polluters that are not actively trying to prevent policy changes — corporations like Comcast, CAT, CVS, GM, and AT&T — which nevertheless remain climate laggards by failing to enact progressive policies.  The quadrant also includes automotive companies like Ford, Fiat Chrysler, BMW and Mercedes that are nearly as complicit as the Koch Companies and Exxon-Mobil in keeping the US and the European Union from enacting meaningful policies.

In the bottom right are corporations that are making some great moves — Google, Nissan, Walmart, Microsoft, and Coca-Cola are among the number — but not as engaged in promoting low-carbon policy either in legislative efforts, business councils or with their customers. Even though many are vocal, their household brand status means that they should be in the vanguard.

The best of the best are the companies that are advocating for a fully renewable future, both through internal initiatives by pushing towards 100 percent renewable energy for all their business activities, and by encouraging others, including world leaders and legislators, to do the same. Among the golden brands are Apple, Tesla, and IKEA.

"The data shows the climate policy agenda, in terms of corporate influencing, is being driven by a small number of massive global corporations,” Influence Map executive director Dylan Tanner said. “It also shows a group of powerful of companies in the tech, consumer goods and utilities sectors increasingly pushing for policy to implement the Paris Agreement.”

The good news is that the trend is swinging to that coveted upper right-hand quadrant, with an increasing number of companies moving toward sustainability and willing to proselytize the Low Carbon Gospel.

The bad news is that Planet Earth can’t wait much longer.