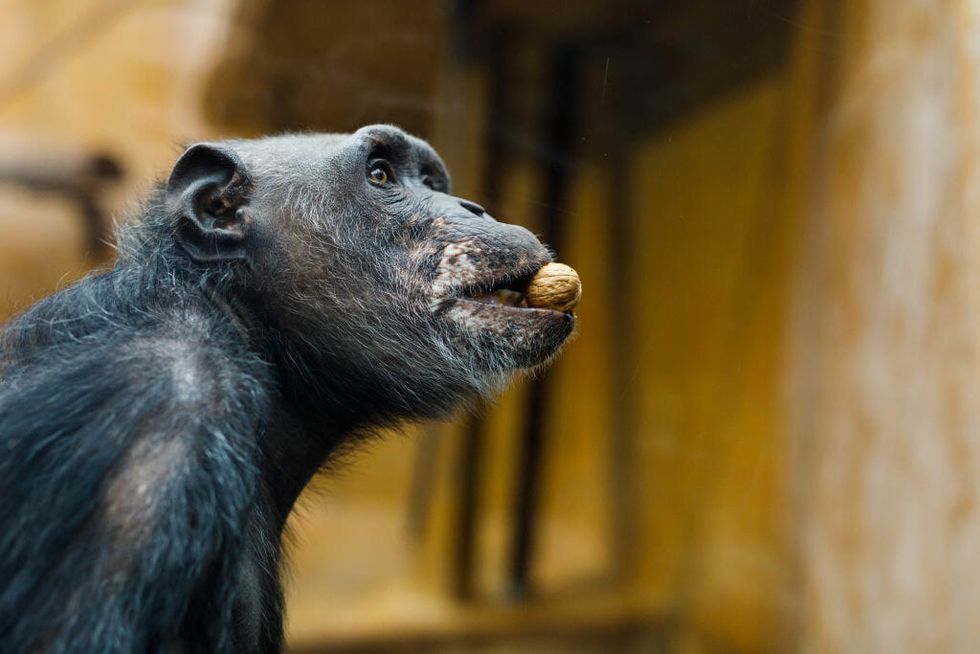 A chimpanzee eats a nut in its enclosure at the zoo in Hanover, northern Germany, on December 19, 2017. (PHILIPP VON DITFURTH/AFP/Getty Images)

A chimpanzee’s life is far from simple: these highly social and intelligent creatures face any number of human and natural threats to their existence. From habitat loss and poaching to predation and Ebola, which has wiped out an estimated third of all chimpanzees, a host of perils lie in wait for these great apes, currently classified as endangered.

Their fragile status makes the findings of a recent CDC study all the more compelling and crushing: published in the Emerging Infectious Diseases journal in December, the study indicated the human cold virus was responsible for a deadly 2013 respiratory disease outbreak that killed five chimps in Uganda’s Kibale National Park.

The closest living relatives to humans, chimpanzees share more than 98% of their genes with humans. Research points to a common ancestor the two groups shared some four to eight million years ago. Chimps typically live within Africa’s grasslands, rainforests and woodlands, and form social communities of a few dozen individuals.

Like humans, they communicate using sounds, facial expressions, and gestures, and are among the few species to use tools; specifically, they employ leaves to sop up drinking water, and sticks and stones to access hidden troves of food. However, in this case, their similarities to humans failed to shield them from a virus that is more commonplace and less lethal amongst their bipedal relatives.

Specifically, scientists involved with this study pointed to rhinovirus C, the culprit behind the “common cold,” as the root of the 2013 outbreak, which spanned from February to September. Senior author Tony Goldberg, a professor at University of Wisconsin-Madison's School of Veterinary Medicine, indicated that these findings were unprecedented and unexpected. "It was completely unknown that rhinovirus C could infect anything other than humans...It was surprising to find it in chimpanzees, and it was equally surprising that it could kill healthy chimpanzees outright."

Harsher than rhinovirus A and B, rhinovirus C is the most brutal form of the common cold. Young children, and particularly children with asthma, are particularly vulnerable. In addition, some individuals are genetically vulnerable to the virus. Specifically, the respiratory system cells of these individuals carry receptors that allow the virus to easily invade each cell.

What was perhaps most shocking to the study’s research team was rhinovirus C’s virulence within the chimp population. With a majority afflicted and five of the 56-strong community killed, including two-year-old Betty, the nine percent mortality rate initially astonished researchers, including Ann Palmenberg, a UW-Madison professor of biochemistry and cold virus expert.

However, after examining Ugandan chimpanzee DNA samples, Goldberg noticed each individual studied possessed receptors that made their cells particularly prone to succumbing to rhinovirus C. "There's a species-wide susceptibility of chimps to this virus," he said.

After studying the genome of the virus found within Betty, Palmenberg noted it unmistakably came from a human host: "We expected to see changes all over the genome, but it is not a chimp-adapted virus,” she said. This finding serves as a warning against human interaction with wild chimpanzees, who may be particularly vulnerable to a disease seemingly commonplace for their human cousins.

Researchers further warned that this outbreak may not be an isolated incident. In fact, it may speak to a larger pattern of wild chimpanzees becoming ill with undiagnosed respiratory illnesses. "In most cases, we don't find out what it is. We're thinking that rhinovirus C might be a major, missed cause of disease outbreaks in chimps in the wild," Goldberg suggested.

Fortunately, following these results and prior results indicating human influence over chimp illnesses, tourists and researchers are now instructed to wear face masks when interacting with chimps in the wild. Still, the study sheds new light on yet another potential threat humans pose to our endangered relatives.