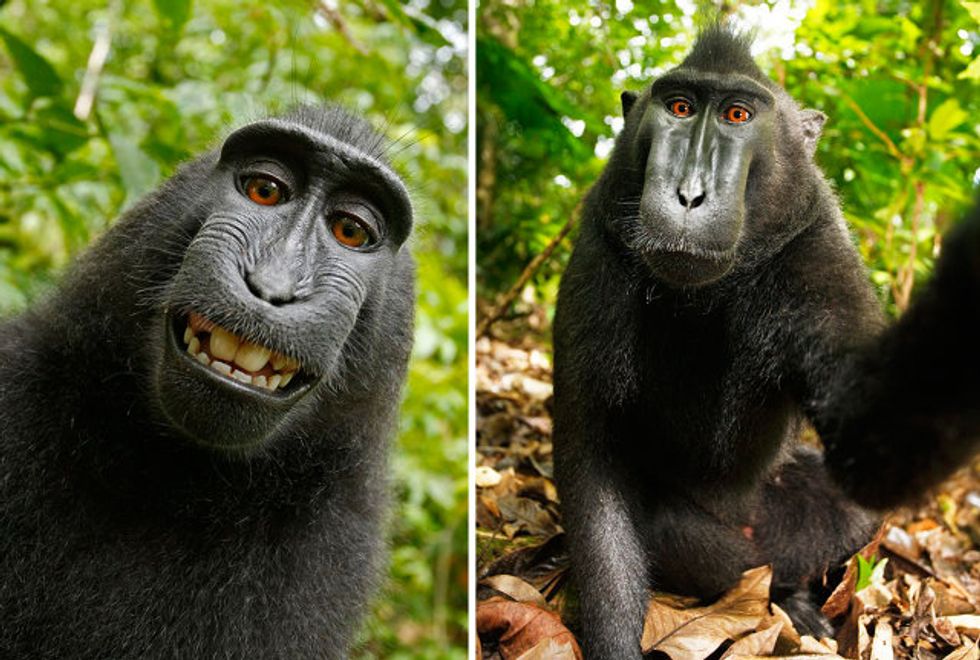 In 2011, a macaque monkey named Naruto took a selfie that went viral. Now six years later, instead of resting on the royalties, freelance photographer David Slater is near bankruptcy as a result of the shot. The photo came about after Slater traveled to Sulawesi, Indonesia to raise awareness of the species and hopefully earn a bit of cash. He claims that he used ingenuity and coaxing to train the monkeys to take selfies, and ended up with the viral shot. “It wasn’t serendipitous monkey behavior. It required a lot of knowledge on my behalf, a lot of perseverance, sweat and anguish, and all that stuff,” said Slater. Slater obtained a copyright over the image in the U.K., where he resides, and published the photo in a nature photography book.

Soon, however, large websites like Techdirt and Wikimedia began using the photo without paying royalties to Slater. When Slater asked them to stop, they refused, saying that since he did not take the photograph––an animal did––he could not own a copyright on it. The U.S. copyright office subsequently weighed in, saying that animals cannot hold a copyright, and therefore the image is in the public domain––meaning Slater can’t get royalties for the image here.

“Every photographer dreams of a photograph like this,” said Slater. “If everybody gave me a pound for every time they used [the photograph] I’d probably have £40m pounds in my pocket. The proceeds from these photographs should have me comfortable now, and I’m not.”

But that wasn’t the end of it. In 2015, the People for Ethical Treatment of Animals (PETA) filed a federal lawsuit against Slater on behalf of the macaque, claiming that the animal was the rightful copyright owner. A California U.S. district court judge ruled against PETA last year. PETA appealed to the Ninth Circuit, which heard arguments last month.

PETA’s case was largely scoffed at. For one thing, the legal argument that monkeys can hold a copyright is pretty absurd. The purpose of the Copyright Act is to “promote the progress of science and the useful arts” by giving creators and their offspring a property interest so that they can make money. Monkeys don’t have much need for money. Monkeys also can’t grant licenses—so they can’t give anyone permission to use their creation.

Additionally, it is unclear what legal interest PETA has in attempting to enforce a monkey’s copyright, even if a monkey could have a copyright interest. PETA is suing as Naruto’s “next friend”—a legal construct that allows someone close to a minor or person incapable of acting on their own to represent that person on his or her behalf. But PETA does not “know” Naruto.

Based on their legal filings, it seems clear PETA doesn’t even recognize the monkey. “[PETA] has no power to say if they’ve even got the right monkey,” said a lawyer for Blurb Inc., the publishing company that published Slater’s book of wildlife photos that included the selfie.

Perhaps coming to grips with its lacking legal position, PETA made a filing late last week with the Ninth Circuit, asking the court to reserve judgment on the appeal because an out-of-court settlement was near. “Given the current progress of settlement discussions, the Parties are optimistic that they will be able to reach an agreement that will resolve all claims in this matter,” PETA wrote.

In the meantime, Slater continues to try to pick himself up from the ramifications of the monkey photo that rocked the internet and the legal world. “I’m trying to become a tennis coach,” said Slater. “I’m even thinking about doing dog walking. I don’t make enough money to pay income tax.”