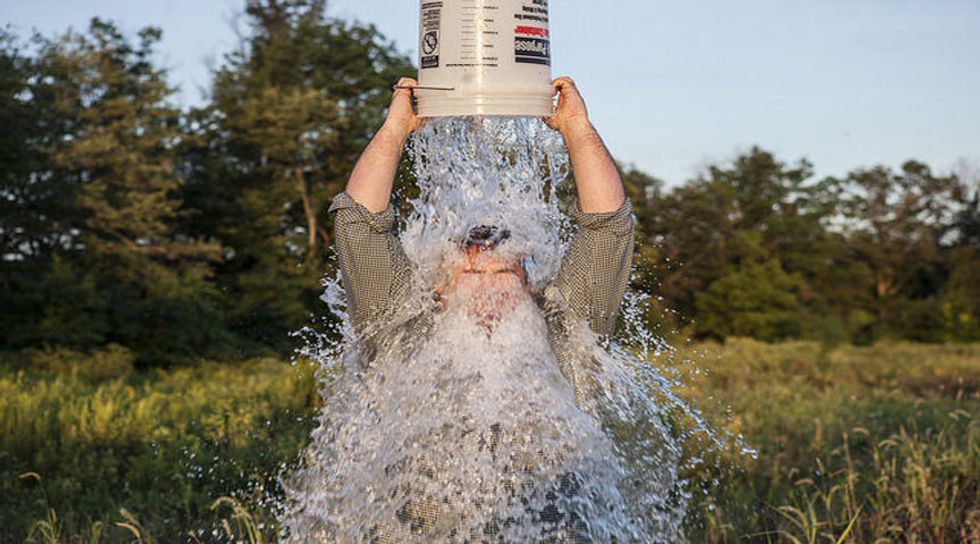 We like to think that disease is simple. Medical researchers and molecular biologists know better, of course, but that rarely filters out into our broader cultural imagination. The popular press is filled with stories about toxins or disease-causing genes because we want simple answers to complicated questions. If there is a gene for cancer, then it’s easy to explain, right? The gene causes the cancer, just like a gene might give you blue eyes or red hair. Toxins are even simpler: if you get poison in your cells, they might die. Nothing could be easier to understand.

But the latest medical breakthrough concerning amyotrophic lateral sclerosis (ALS), a disease that gained attention in 2014 because of the publicity generated by the “ice bucket challenge,” can shed some light on the complicated relationships between genetics and disease.

ALS kills the nerve cells that control movement. Over time, muscles get weaker and waste away. It first became well-known in the United States when it affected baseball player Lou Gehrig, and as a result it is informally called Lou Gehrig’s Disease. Today, the most famous person living with the disease is physicist Stephen Hawking. It can start expressing itself as a simple weakness in the arms and legs, but can lead to loss of all motor skills.

ALS has confounded scientists and doctors for years. Research found a connection with genetics only in a small percentage of cases; most cases appeared randomly. Detailed cellular research has shown that a regulatory protein called TDP-43 is clumped in the nerve cells of ALS patients. This seemed important, but nobody knew whether this “clumping” was a cause or an effect of the disease, or how it might be related to the symptoms.

This is where the researchers at Johns Hopkins University came in. For the first time, they put together a coherent story about exactly what might be happening “behind the scenes”

to cause the symptoms of ALS, why that cause is related to genetics, and yet is still not the simple “cause-and-effect” relationship that people had hoped.

The researchers who made the discovery wrote up a scientific paper that is a bit dense if you’re not actually a molecular biologist. To understand the story it tells about ALS, and how its symptoms come about, let’s back up for a moment and review exactly what genes do.

Genes are bits of DNA that our cells use to make proteins. Of course, in the bigger picture we always hear about genes controlling traits: from height and eye color to IQ and personality. But at the fundamental level, these traits come about because our cells produce different types of proteins. The proteins lead to different structures forming in our cells, which in turn can give rise to characteristics of our physical body ranging from the pigment of our skin to the speed of our metabolism, or even the the structure and operation of our brain.

But saying that “DNA is used to produce proteins” is a lot like saying that a blueprint is used to make a house: there are a lot of very complicated steps that need to happen to get from one to the other. DNA is used as kind of a “template” to make RNA strands that travel out into the cell to make the proteins. But not every part of the DNA is useful: when the RNA strand is first made, the important parts are mixed in with “introns” (or segments that shouldn’t be used), and “cryptic exons” (segments that are only supposed to be used some of the time).

This strand (called “pre-messenger RNA”) has to go through a complicated chemical “cut and paste” process before it is ready to go make proteins. Your cell has to snip out the important parts of the RNA code, remove any segments that shouldn’t be involved in making the protein, and piece the important bits back together. When that process is done, the result is messenger RNA that is ready to create proteins. (If you’re really curious about learning more about this process, check out chapter 29 in the excellent textbook Biochemistry, Third Edition by Reginald Garrett and Charles Grisham.)

This level of detail may make your head spin, but this process is important because the protein identified as related to ALS, protein TDP-43, plays a critical role in the cut-and-paste process that is going on in the nucleus of the cell. You can think of TDP-43 as a kind of stencil that attaches itself to the pre-messenger RNA, indicating where the “cutting” needs to

be done in order to remove the unneeded DNA segments and pick out the parts that are supposed to be used to make the protein.

As you can imagine, when TDP-43 isn’t functioning properly, this copy-and-paste procedure can go very wrong. When not enough TDP-43 is available, it can lead to copying errors, and cryptic exons being activated in the final strand of RNA when they should not be.

What happens when cryptic exons that ought to have been suppressed by TDP-43 are not suppressed? The final products, the proteins, come out deformed. The cell cannot use them properly and ends up getting sick. If enough dysfunctional proteins are created, the cell will die.

Structure of the TARDBP protein  (TDP-43) via Wikipedia

Over the last decade, there has been a huge amount of research that examines how the improper “activation” of cryptic exons can lead to errors in the production of proteins, which will cause them to be malformed. The new discovery by the team at Johns Hopkins was the discovery of how the “clumping” of TDP-43 in the nerve cells of ALS patients directly relates to their symptoms of muscular degeneration.

According to the summary published at the Johns Hopkins Medicine website, the researchers tested a theory that was fairly straight-forward once you know all the details. In ALS patients, TDP-43 clumps up in the nerve cells. When the TDP-43 is deformed, it can’t perform its function in the transcription process. As a result, the lack of functional TDP-43 results in more activation of cryptic exons, which leads to more errors in the creation of proteins. The build-up of malformed proteins then ends up gradually killing the nerve cells in the muscle.

It is a brilliant theory, and the first time an actual story could be told to explain the cause-effect relationships that were producing ALS symptoms. Moreover, the researchers have taken the first steps to testing the theory by proposing a treatment. If this story is correct, then if patients can be treated with a substitute protein that performs the same function as TDP-43, suppressing the cryptic exons and improving the transcription process, their symptoms would be alleviated. They tried it, and it worked: they inserted a custom-designed protein into affected cells, and the cells returned to normal. The next step is to test the therapeutic strategy in animals afflicted by ALS to see if it can halt the symptoms.

Obviously this is a fantastic breakthrough for ALS. Philip Wong, one of the researchers on the project, has also said that similar mechanisms may be at work in other age-related degenerative conditions, as well. This could lead to an entire line of research on possible treatments for frontotemporal dementia, inclusion body myositis, and a variety of other neurological and degenerative diseases.

But there is another reason to find the details of this breakthrough interesting: the relationship between genetics and disease, and indeed between genetics and any physical trait or condition. Is ALS genetic? It’s clearly triggered by genetics and the operation of DNA in the body. But it’s also not a simple matter of some genetic “switch” turning on an illness. The connection between genes and physical traits is enormously complex, in ways that most people don’t think about. It is a complicated dance between enzymes and proteins, and “cryptic” strands of DNA that sometimes are turned on and sometimes are turned off, that will alter the outcome of how genes are expressed.

That’s something to think about, the next time you read a science fiction novel or a news story about the “genetic causes” for things. Whether you’re talking about the genetic control of intelligence, illnesses, personality, athletic skills or even X-men superpowers, the story is never as simple as people want it to be.