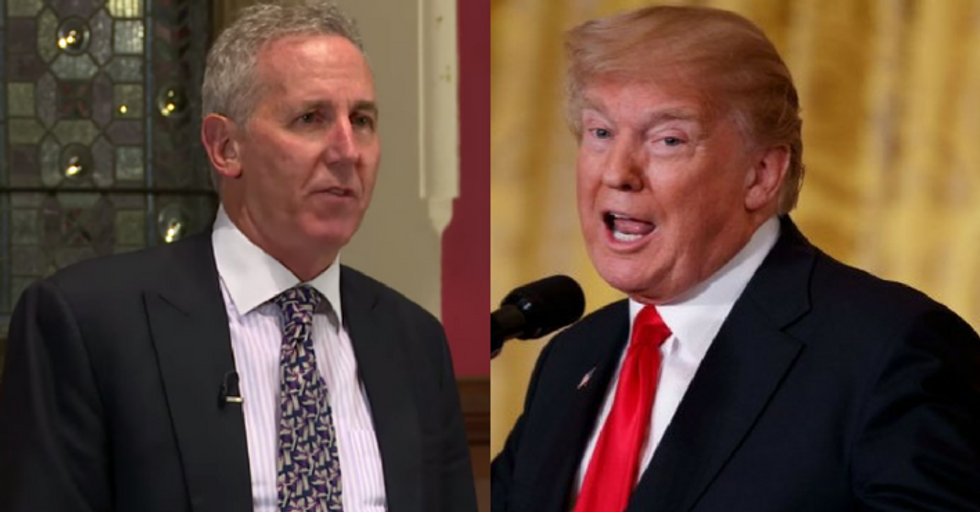 Earlier in the week, Cohen pleaded guilty to eight separate charges. According to Cohen's lawyer Lanny Davis, the plea deal implicated Trump as an unindicted co-conspirator.

In response to both revelations, Tony Schwartz took to Twitter Friday to predict the end is near. He posted:

"The other shoe has dropped — the smoking gun equivalent to Nixon’s tapes. Alan[sic] Weisselberg knows everything. Trump will resign as I always assumed. Only matter of time now."

"Trump will be at his most dangerous and unstable in the weeks and months ahead. Drowning, he will want to take as many of us down with him as he can. He should never have had access to the nuclear codes but especially not now."

Trump will be at his most dangerous and unstable in the weeks and months ahead. Drowning, he will want to take as… https://t.co/2H37ZtZUMW
— Tony Schwartz (@Tony Schwartz) 1535138425.0

But who is Tony Schwartz and what does he know about Trump?

According to a speech Schwartz gave in 2016, Tony Schwartz made a decision in the mid 1980s to "write a book with a brash, young, moderately successful real estate developer who was mostly unknown outside the United States."

The unknown developer was Donald Trump. The book became the bestselling Art of the Deal which propelled Trump's public profile to new heights. Trump often refers to the book as "his proudest achievement."

Announcing his candidacy for the Republican presidential nomination in June 2015, Donald Trump stated:

"We need a leader that wrote The Art of the Deal."

Since then, Schwartz expressed deep regret for writing the book. Both he and the book's publisher maintain Trump contributed no words on paper to the book, nor did he proofread it. Schwartz penned it all based on interviews conducted with Trump and access granted to Trump Organization files and business associates.

@EJG_Cashmere @TheBeatWithAri @realDonaldTrump I wrote the book start to finish ... and have said so countless times over the past two years
— Tony Schwartz (@Tony Schwartz) 1524245052.0

If Art of the Deal made Donald Trump, then so did Tony Schwartz by extension. Schwartz eventually donated his profits and royalties from the book to different charities as his own form of penance.

Just gave $55,000 in latest Art of Deal royalties to coalition of anti-hate organizations. What is Trump doing with his royalties?
— Tony Schwartz (@Tony Schwartz) 1475595269.0

His regret for elevating Trump from local developer to international renown is something Schwartz remains quite vocal about with Friday's tweet being just the latest to address Trump the man, his candidacy and then his presidency.

Schwartz began issuing warnings back in 2016 about the man he spent months studying and interviewing in the 1980's.

Trump thinks it serves America for him to be up tweeting at 3 am? How about reading a book instead? How about sleeping, so you're rested?
— Tony Schwartz (@Tony Schwartz) 1475267988.0

Schwartz claimed before the 2016 presidential election that Trump lies and demands those around him also lie constantly. After the election he stated the same in his Twitter posts, like the following examples.

How many times did Pence outright lie during debate? This is what Trump teaches people around him to do w/o guilt. His children do the same.
— Tony Schwartz (@Tony Schwartz) 1475703244.0

Schwartz also relayed Trump's attitude and behavior in regards to women from the months they spent together while Schwartz wrote the book and afterward while promoting it.

Trump on groping women: this is exactly the man I knew. He considered women objects and that will never change no matter what Ivanka says.
— Tony Schwartz (@Tony Schwartz) 1475881165.0

Trump's words on women are precisely why I felt compelled to speak out about him. He is a repugnant human being by any standard.
— Tony Schwartz (@Tony Schwartz) 1475886576.0

Schwartz also accurately predicted that Trump would not apologize for any of his mistakes after they were exposed to the public.

Trump may speak tonight but he will not truly apologize because he is incapable of doing so. He will make it worse.
— Tony Schwartz (@Tony Schwartz) 1475889780.0

As predicted, Trump's non-apology apology only makes it worse. There is only one Trump. He has never changed and he never will.
— Tony Schwartz (@Tony Schwartz) 1475924879.0

After the election, Schwartz continued to speak out.

Trump tweets "a great day at the White House." This is utterly unmoored from reality. He is now operating several bricks shy of a load.
— Tony Schwartz (@Tony Schwartz) 1501544723.0

Trump’s ignorant playground bully tweets and comments make him smaller than life and diminish all of us.
— Tony Schwartz (@Tony Schwartz) 1512044667.0

With sadness, I’ve come to the conclusion that any American who supports Trump is complicit with enabling a deeply… https://t.co/p6TQhFRbab
— Tony Schwartz (@Tony Schwartz) 1520292402.0

Only time will tell if Allen Weisselberg's deal with federal prosecutors will result in a Trump resignation as Schwartz predicts.