Joe Scarborough Just Tweeted a Psychological Profile of Adolf Hitler, and the Similarities to Donald Trump Are Eerie 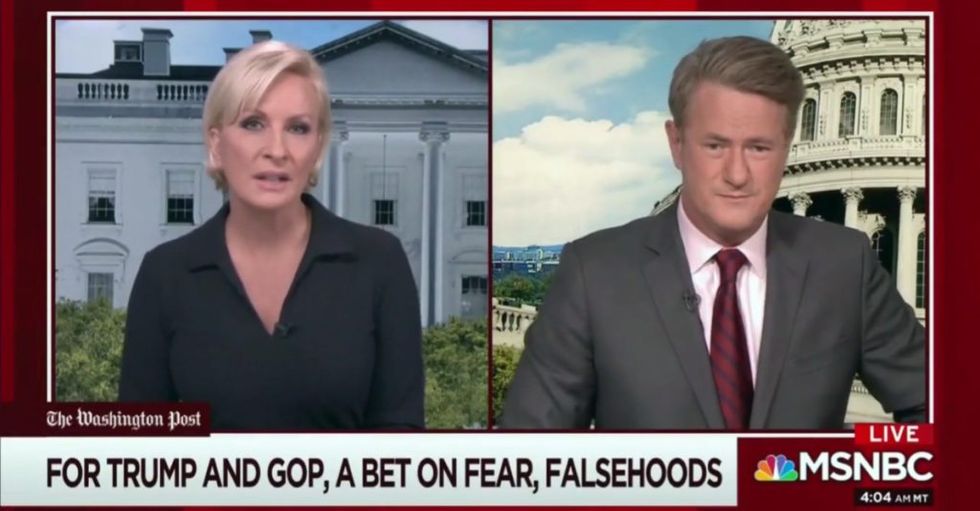 On Monday night, former Republican Congressman Joe Scarborough took to Twitter to post an excerpt from the United States Office of Strategic Services (OSS) report on dictator Adolph Hitler. The OSS was the WWII precursor to the CIA and NSA.

Scarborough—who now works as a host of Morning Joe on MSNBC—tweeted:

"'His primary rules were: never allow the public to cool off; never admit a fault or wrong; never concede that there may be some good in your enemy; never accept blame; people will believe a big lie sooner than a little one; repeat it frequently enough people will believe it'."

"Hitler's psychological profile in a report prepared during the war by the United States Office of Strategic Services."

People immediately made comparisons to another world leader.

@JoeNBC What’s more worrisome....that POTUS embodies so much of that profile, or that so many people (Congress) are seemingly going along?
— Phil Christian (@Phil Christian) 1540256571.0

Many pointed out, that while Scarborough made certain not to personally point any fingers, others had.

Scarborough went on to refer to his tweet on his program Tuesday morning with Morning Joe co-host Mika Brzezinski. On air, Scarborough read the full OSS profile.

Brzezinski then began a segment highlighting some of the President's more recent false statements. Scarborough also threw a question to correspondent Willie Geist who further detailed some of Trump's comments on the GOP campaign trail.

They finished the segment with a rebuttal of the President's recurring statements about a caravan of immigrants that left Honduras headed for the United States made by Shep Smith on Fox News.

Scarborough's tweet was not the only thing that brought to mind similarities between the WWII dictator and the 45th United States President.

Trump's own words during his Monday rally for Senator Ted Cruz in Houston, Texas inspired comparisons as well.

The word narcissist is also often associated with Trump's behavior and personality. But is it an accurate description?

According to psychological and psychiatric resources, the "hallmarks of Narcissistic Personality Disorder (NPD) are grandiosity, a lack of empathy for other people, and a need for admiration."

"People with this condition are frequently described as arrogant, self-centered, manipulative, and demanding. They may also concentrate on grandiose fantasies (e.g. their own success, beauty, brilliance) and may be convinced that they deserve special treatment."

"These characteristics typically begin in early adulthood and must be consistently evident in multiple contexts, such as at work and in relationships. People with narcissistic personality disorder believe they are superior or special, and often try to associate with other people they believe are unique or gifted in some way."

"This association enhances their self-esteem, which is typically quite fragile underneath the surface. Individuals with NPD seek excessive admiration and attention in order to know that others think highly of them. Individuals with narcissistic personality disorder have difficulty tolerating criticism or defeat..."

The President is on a full offensive, campaigning hard for the GOP to maintain control of Congress after the midterm elections.

Midterms are slated for Tuesday, November 6, 2018.