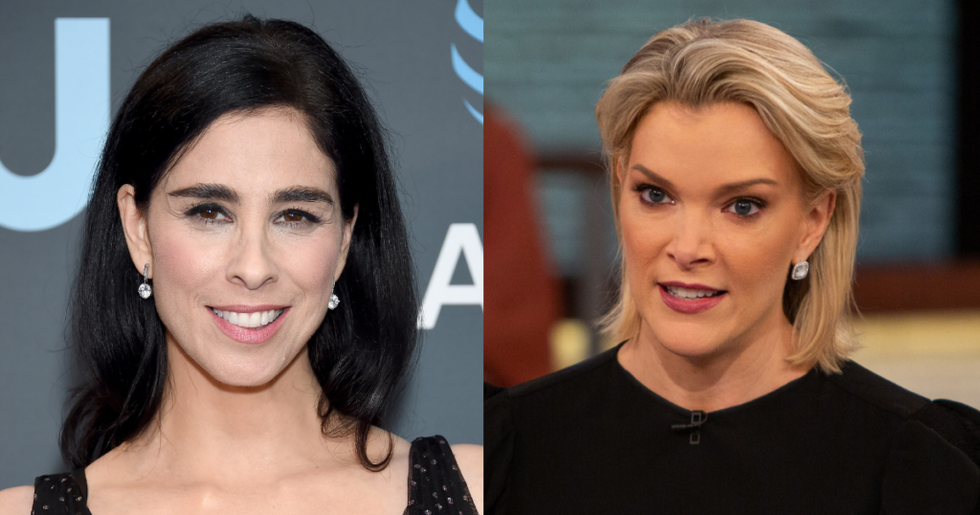 Sarah Silverman and Megyn Kelly got into a Twitter spat on Tuesday after Silverman belittled President Donald Trump's latest dismissal of climate change.

On Sunday, Trump suggested global warming is not real because it was snowing during Senator Amy Klobuchar's (D-MN) presidential campaign kickoff speech:

"Well, it happened again. Amy Klobuchar announced that she is running for President, talking proudly of fighting global warming while standing in a virtual blizzard of snow, ice and freezing temperatures. Bad timing. By the end of her speech she looked like a Snowman(woman)!"

Silverman on Monday exploded at the president for denying the reality of climate change:

"No point in explaining how mind-blowingly stupid this tweet is so I’m just gonna go with F*CK YOU, and also add that you are a smelly penis hole with balls that touch water. Eat sh*t, you greedy tw*t."

No point in explaining how mind blowingly stupid this tweet is so I’m just gonna go with FUCK YOU, and also add tha… https://t.co/3hKlNeGURK
— Sarah Silverman (@Sarah Silverman) 1549943259.0

Silverman's expletive-laden tweet to Trump did not sit well with former Fox and NBC personality Megyn Kelly, who was fired from NBC last year for making racially insensitive remarks.

Kelly, replying to Silverman, implied that people who curse should not be able to get voiceover work in children's movies:

"This woman wants to star in children’s movies produced by Disney. (And just did, in Ralph Breaks the Internet.)"

This woman wants to star in children’s movies produced by Disney. (And just did, in Ralph Breaks the Internet.) https://t.co/WwHEPFBka6
— Megyn Kelly (@Megyn Kelly) 1549997437.0

Silverman's response was that edgy commentary is her job.

"It’s true! I am a blue explicit often political comedian and also love doing voices for children. I know it’s easier if people are one thing but no one is, not even you! We all have many sides and I think that’s ok. Peace Ma"

Silverman had no time for Kelly's faux outrage:

"Ps I’m more offended by a president who denies a real threat 97% of scientists beg him to take action on while creating a fake threat out of at-risk brown people at the border."

Parents appear to be okay with Silverman's humor.

@SarahKSilverman Lighten up, @megynkelly. Sarah has a great sense of humor, and I imagine she would write a wonderful children's book!
— Lisa Riley 🇺🇸🌊 (@Lisa Riley 🇺🇸🌊) 1549999576.0

Penis jokes are not as bad as saying black face is not racist.

@SarahKSilverman And that woman couldn't imagine a black Santa, cheered the ruffing up of a little black girl at a… https://t.co/jzry29rwKa
— Jeremy Newberger (@Jeremy Newberger) 1550005799.0

Plus, Silverman is far from the first blue comedian to curse.